What issue can the Democrats carry in the 2020 election?  In the past, they were the custodians for hot-button issues like immigration, “the working man”, babies, foreign policy, and the environment.  These issues forced the GOP to walk a tight-rope while the media tried to knock them off balance so they’d fall into a net of accusations like racism, zealotry, hating women, and all the usual media-reinforced libtard slander.

No more.  When the Democrats tried to hold President Trump hostage by pointing the political gun filled with these issues as bullets at him, Trump snatched it and pistol-whipped them to death.  President Trump has returned these issues back into America-first custody, where the media has been neutered and no longer shape the popular perspective.

One point about these issues, the President is not only fixing the country now, but also for the future.  He’s teaching future presidential candidates to not be timid snowflakes, and not only are these winning issues and how to present them to the American people, but his rallies prove how popular you can be if you deliver.  This will yield better effectively conservative candidates in the future (assuming more conservatives are in the GOP).

Let’s visit these issues the Democrats used for years to terrorize the GOP, and all of which now the majority of Americans favor Trump.

Americans have never been in favor of killing babies, but the Democrats always pushed the “it’s a clump of cells” lie, and paint us as Bible-thumping zealots who want to control women.  If they knew anything about women, they’d know that’s impossible anyway.

Republicans avoided this topic on campaigns like the corona virus, and when someone lacking the wit to intellectually navigate the issue ended up holding that grenade, they gave leftist media the material to paint Republicans, like Todd Akin and Richard Mourdock, as lunatics when it exploded.

Trump ran on a strict pro-life platform and handed this topic back to the GOP, but to his credit, I think Rand Paul is the first main-stream Republican (that I remember) to land a serious punch on Democrats on this issue in 2015:

Every Democrat candidate supports late-term baby-murder and are running on a baby-killing platform.  As you can see, President Trump continues to bring this issue back home. 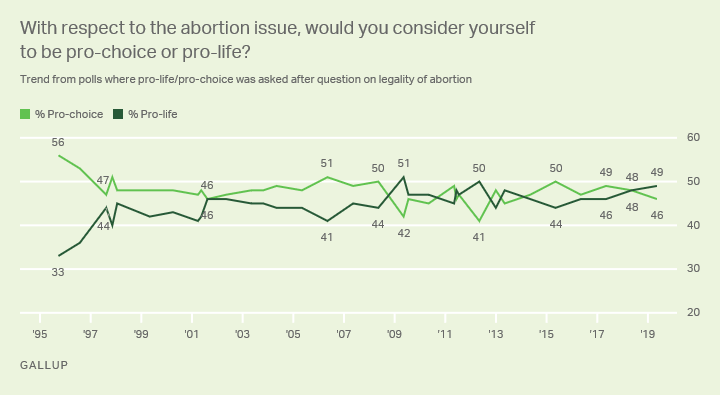 Republicans would talk about building a wall and shutting down the border, but lacked the gonads and wit to push back on the Marxist narrative.  They never had the will to go against the Chamber of Commerce and Soros-funded groups, but Trump made this a national security and law enforcement issue and taught the GOP that this is yet another winner for us.

The Democrats will pretend to support border security, as Wolf Blitzer did in this video.  Steven Miller provides a glimpse of how this argument will go down, except it will be President Trump delivering the beat-down in front of the world:

President Trump not only took the issue as a political position, but he re-wired government to fund it, and actually started to build it. (Click here for a real-time interactive map of the border wall).

Not only did President Trump take this major issue from the Democrats and pro-war Republicans, he exposed the vast corruption by current deep-staters and past administrations.  Democrats turned foreign policy into a criminal enterprise.

He reigned in China, where other presidents allowed them to do whatever their communist hearts desired.  People learned about China’s economic terrorism, and little human-rights details like live organ harvesting.  Why did Obama not deal with China?

Throughout the world, our President has solved big, complex problems that seemed like they’d never be solved.  North Korea, Russia, Ukraine, Turkey, Syria, and now Iran in the cross-hairs, with Venezuela on deck.  Trump has ushered in an era of peace and brought nations together.

Trump stepped foot in the DMZ, and into North Korea, and released them from China’s control.  No other President could ever dream of accomplishing this.  Kim will end up signing an agreement with the United States, likely as the world watches the Democrats try to impeach Trump.

Trump forced Turkey and Syria to deal with each other, and now they’re moving to peaceful ceasefire.

The Democrats used to run on an anti-war platform (during the Bush years).  Trump has actually achieved ending war, and now is working on bringing the unthinkable into reality: peace between Israel and Palestine.  Wow.  President Trump will negotiate the greatest deal, literally in history.

Our world’s problems are not completely solved, but the President has made progress beyond anyone, ever.  Good luck on this one, Democrats, but this issue belongs to us, and you may never get it back again.

To the dismay of frauds like Joe Biden and Bernie Sanders, when they roll up their sleeves on the podium to show they’re about ready to get down and dirty with the hard-working men and women of the rust belt, to their dismay, those hard-working people are busy working and collecting a paycheck.  Wage growth for the unskilled has popped the most under the Trump economy, and his pro-American agenda is bringing jobs back to the United States.

The Democrats also don’t have an Ivanka, and her workforce initiatives directly help the unskilled learn real, marketable skills in growing industries.  Trump wants to help workers get a real-world education that makes them money; Bernie wants to educate workers on how to overthrow the plant owners.  From farmers in Iowa to manufacturing workers in the Midwest, Trump has put this issue far beyond the reach of any Democrat.

This is tied to "the working man", but this is my favorite because not only did President Trump sign the Tax Cuts and Jobs Act into law in 2017, but now he’s running on more tax cuts!  In 2017, no Democrat voted for the TCJA bill, and every Democrat candidate is on record that they’d repeal the current tax cuts.  Now as election season heats up, the Democrats must run against more tax cuts, while Republicans get to ride the wave and support them.  The "tax cuts to millionaires and billionaires" lie doesn't land like it did in the past and more people are thankful to be receiving a paycheck from millionaires and billionaires.  Simply amazing.

Over the past few decades, the Marxists have taken the issue of clean environment and morphed it into a scam called “global warming”.  Once exposed that the environment isn’t warming, they pushed it further into “climate change”.  The President is untangling the scam from the real pollution issue.

Trump is making the Republicans the face of clean water and clean air.  Sorry Democrats, this has always been our issue; not yours.  If you disagree, take a stroll through San Francisco.  You people really are disgusting and Trump has brought it into the spotlight.

Trump will further tackle health care in his second term, but the fact he killed the mandate and rescued the country from the ACA scam alone makes health care our issue.  Passing right-to-try, and prioritizing veterans also makes this our issue.  Whatever Democrat is left standing at the convention will get slaughtered on health care, as every single candidate supports prioritizing illegals over Americans.  The Democrats screwed our health care system up beyond belief, and the President will continue fixing it.

All your issues belong to us

Trump's rallies are proving to future Republicans how popular these issues are, and proves if you promise and deliver, they will stand out in the freezing cold for 48 hours for you like they did in blue Wisconsin and last night in New Jersey.  Do you think these people standing in line for Trump will vote?  Yes, 100% of them.  You know these are winning issues when deep blue New Jersey is strong for Trump.