The massive infiltration of illegals has drastically been reduced.  This will be denied by anti-Trump, pro-China crowd who are heavily vested in removing Trump for 2020, but like everything with Trump’s accomplishments and kept promises, the facts speak for themselves.

The border wall has been under construction.  The best argument the anti-Trump morons can put forth is also the most stupid; they don’t consider the replacement of an old fence -- that a 9 year old Mexican can jump over with a running start -- with a new steel-bollard wall as “construction”.  They spin it like we’re just slapping some paint over it and securing it back with some twisty-ties.

If you take a fence that does nothing to prevent someone from crossing, rip it out, and put in this new massive steel wall secured deep underground to curb human trafficking tunnels, that’s new construction.  The fact that something happened to have been there before doesn’t mean this isn’t securing the border.

The “Remain in Mexico” policy has been working spectacularly.  While Ann Coulter was crying about concrete versus steel bollards, Trump was plugging the asylum loophole, where illegals could apply for asylum and wait in the US.

Thousands of would-be illegal immigrants are being returned to await asylum hearings in Mexico as part of a program the Trump administration has credited with curbing the recent wave of family migration at the southwestern border.

The Migrant Protection Protocols—more colloquially known as the "Remain in Mexico" policy—are regulations issued by former secretary of homeland security Kirstjen Nielsen in December 2018. Under the MPP, a subset of individuals who claim to be seeking asylum after being apprehended at the border now must await the results of their immigration court hearings in Mexico, rather than being detained—or, more often, released on their own recognizance—in the United States.

Asylum seekers, especially from non-contiguous countries, pose a unique challenge to the immigration system. Preexisting laws and regulations mean that asylum seekers can only be detained for so long before being released, while the large immigration court backlog essentially guarantees that these time thresholds will be passed. The result is a system of de facto catch-and-release, in which an individual can simply claim asylum at the border and then disappear into the interior while his or her case is processed.

This is a major hole that's been plugged.  The never-Trump morons continue to cry that border apprehensions are going down.  This drop in apprehensions is directly attributed to plugging this asylum issue: 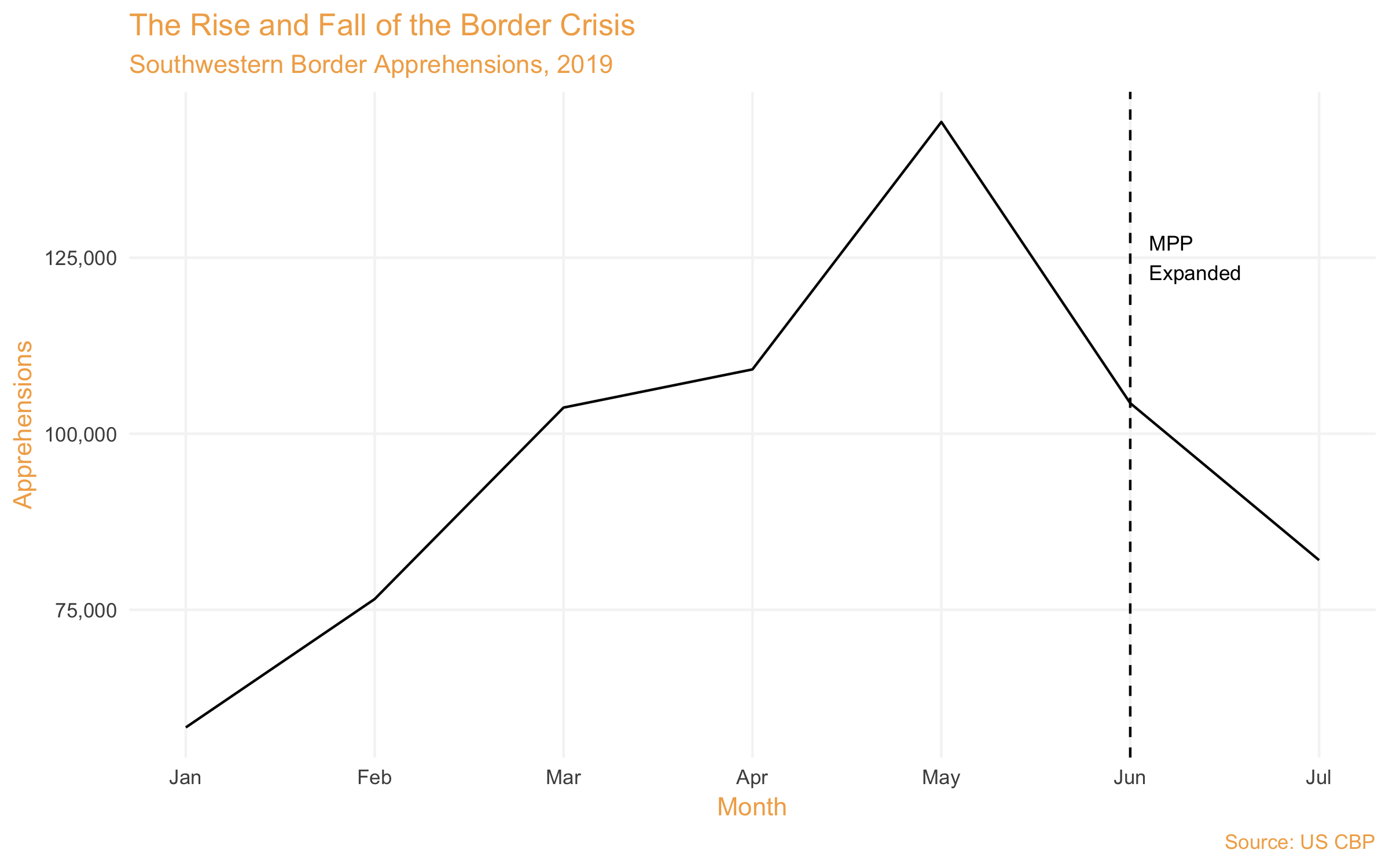 Notably, the "Remain in Mexico" policy does not work by stopping individuals before they enter at the southwestern border, only returning them back once they cross. This means that to the extent the policy is effective, the MPP reduces immigration by deterring would-be crossers, who may not attempt to enter because they know they are less likely to be able to stay in the country.

The Trump administration is expanding "fast track" deportations, dumping them back across the border and bypassing the flooded immigration courts:

“We’re in the middle of a very fast and furious few months in this administration’s immigration agenda,” said Sarah Pierce, a policy analyst at the nonpartisan Migration Policy Institute. “While most of the focus has so far been at the border, this change expands that focus to the interior.”

The notice gives immigration officers broad authority to place anyone who entered the United States without permission and has lived in the country continuously for up to two years in “expedited removal” proceedings.

Essentially this means people who are undocumented, and cannot prove that they’ve lived in the country for longer than two years, could be deported swiftly without appearing before an immigration judge. Many individuals picked up by ICE would not, therefore, typically have access to hearings, appeals or a judicial reviews for their legal claims as a result of this policy.

How amazing is this?  Our President is attacking this Marxist-created problem from all angles: physically at the border, on the Mexico side, and within the interior.

ICE is raiding the workplace to ferret out illegals.  Now these dreamers can go back to their socialist-run utopias that Bernie Sanders tells that we can learn from.

The battle against the Obama holdovers and foreign-controlled legislators is never over.  As anti-Americans, it's their duty to fight us, but we'll continue to win.  One step back is being followed by two steps forward along this journey to secure our country.

The President is looking at how to attack the anchor baby problem, where illegals can make it across the border, download a little dreamer, and it's home free for a life of subsidies.  This will be another fight he's going to take on, and with excellent timing as this will be a fantastic campaign issue.

We're always looking how bypass anti-American Congress to keep funds allocated for our border security.  As an example, he's diverting funds from other departments:

Washington — The Trump administration is planning to use $271 million allocated for disaster aid efforts and other initiatives to expand space in migrant detention centers and bolster a program that requires tens of thousands of asylum-seekers to wait in Mexico while their cases are processed in the U.S.

The Department of Homeland Security (DHS) notified Congress in late July that it intended to reprogram funds from several agencies — including the Federal Emergency Management Agency (FEMA), the Transportation Security Administration (TSA) and U.S. Coast Guard — to detention centers managed by Immigration and Customs Enforcement (ICE). It also said it was funding the construction of temporary facilities for the government to hold court hearings for its controversial "Remain in Mexico" program.

Think back a year or so ago when caravans were marching towards our border and hopping on top of trains.  Those days are done, thanks to help from Mexico.  The President lit a fire under Mexico's ass, threatening to ramp up tariffs if they don't stop the invaders from reaching our border.  It's worked brilliantly, and we now have a second border wall, also known as the "Mexican police":

What are Africans doing in south Mexico?  Anyway, good job amigos!  Keep it up and help keep America safe!  Don't think we don't appreciate it.

Most of the wall will be complete just in time for the 2020 elections, which means by Trump's first full term (January 20, 2021), the wall will have been completed.  Amazing work Mr. President.