Americans love watching leftists eat their own.  Anyone minimally familiar with Marxism is well aware of how expendable useful idiots are, and witnessing that moment when they figure out they're now a target of their own ilk is quite enjoyable.

It's happening right now with Mastodon users as they realize Google might bounce Mastodon-friendly apps from the Play Store.

Gab is enemy number one of Soy Valley, much like how America was the enemy of King George III as we achieved our independence.  To understand why Google and the ungendered in Palo Alto are furious with Gab, I covered this last June, when Apple gave Parler a wake-up call.

When Gab was undergoing an overhaul, I wrote about them forking Eugen Rochko’s Mastodon project for a new stable base framework, which prompted Rochko to have a meltdown and call for all the Fediverse to block Gab users, which did happen.  Now, a nice chunk of users of his framework may have issues using mobile.

Rochko’s project itself isn’t a target of Google, but apps that allow communication with servers in the Fediverse network, of which Mastodon is the largest, are on the Android chopping block if they interface with mean ‘ol Chad-infested Gab.

Rochko attempted to apply logic to the situation:

His attempt to highlight hypocrisy on Google’s part is itself comedically hypocritical, as Gab rightfully makes similar arguments against Twitter, e.g. Twitter facilitates mass shootings and AntiFa-BLM terrorism; is Twitter banned from the app stores like Gab?

Of course not.  Gab is blamed for Twitter’s facilitation of these horrific acts, and apps blocked.

There are some users that seem to think this will blow over, but it won't.  If those apps don’t provide an update that hard-codes the blocking of Gab, then as sure as I’m typing this they will be bounced.

There’s a few points of humor there: one, the Fediverse faithfuls have no problem outright blocking Gab, but don’t feel that they should be forced to do so because it’s an open-source platform, and the responsibility to regulate “hate speech” (a synonym for “free speech”) falls on the server.  They are so clueless that they literally don’t see the irony in this.

Second, some users think they can just make an appeal to Google, since they’re all on the same Marxist team and united against pro-American Gab, who have way too many white Christian members and allow mean things to be said about people who hurt children.  No.  The developers will either block Gab in the apps, or they’re gone; it’s that simple.

There's no appealing to Google, and ultimately the Fediverse doesn't carry that much weight.  In all, there's ~3mm users; Gab alone has almost 5mm users.

If I were Parler, I’d be worried; not because of Google’s threat to Fediverse apps, which Parler isn’t part of or even implements the protocols (as far as I’m aware – they weren’t even smart enough to try that), but because there's no doubt they (Google) are furious that they can’t touch Gab.

It’s like the Palo Alto wolf who desperately wanted to blow down the pro-Trump castle made of steel, but failed as Gab users were looking out of the window, pointing and laughing.  The wolf finally gave up and is moving next door to the Parler house made of plywood; they’re pissed and want some MAGA blood.

I’m still holding my prediction that Parler will be shut down closer to the election, thereby forcing everyone over to Gab.  Speaking of Parler, it would be HILARIOUS if a bunch of Gab users made a bunch of pro-American, patriotic Gab posts, then went over to Parler to post them, then get the word out that Parler is allowing Gab posts.

This would force Parler to either ban these patriotic pro-Trump posts, or endure the wrath of Google and Apple.  However, non-members couldn't see them, because the Parler geniuses made it a closed system.  Bongino really messed up investing in that dumpster fire.

In contrast, Gab is rolling out another product that will unquestionably send Google into a rage: they’re about to release their answer to YouTube!

To quote Torba: (I'd embed the post, but embedding STILL is not working):

Something I think A LOT about is: if the Pilgrims were around today (and we are) where would we go? Where is our “new world?” Where do Christians, patriots, and sane people who cherish American values and freedom go to escape this madness?

The more I think about it, the more I realize that Gab is that place. The physical location doesn’t matter. What matters is our shared values, vision, and mission.

So long as we have a place to speak freely, and soon trade, buy, and sell freely; we can operate outside of the existing real world chaos and create our own new world filled with truth, hope, and promise. Our own digital nation and economy, united around shared values and freedom.

We are the Founding Fathers of this digital new world.

Can you believe this hate speech?  If you want some more of that, check out his interview with Glenn Beck.

P.S.: if anyone on the Gab team sees this: 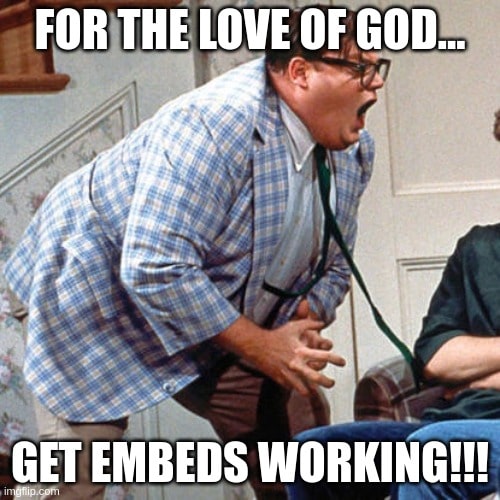