Gab has been banned and rejected at literally every turn, and most importantly, the app store, but that obstacle is about to be conquered.  Meanwhile, Parler has been enjoying life with no worries and growing their user base while enjoying distribution in the app stores.

Apple just gave Parler their long-overdue first round of kicks to the nuts:

Apple reportedly has demanded that Twitter competitor Parler censor “offensive” speech from its website or the Parler app will be removed from Apple’s App Store.

Parler CEO John Matze is considering a lawsuit against Apple.

“I am considering legal action against Apple as this is not the first time they have censored one of my apps over political views,” Matze told LauraLoomer.us. “Additionally, I am speaking with House and Senate members about possible legislative action.”

On a Parler post earlier today, Matze revealed that Apple contacted him last week “via telephone saying that we need to ban ‘offensive’ content off Parler or they will take Parler off the App Store. We flat out refused and now we cannot push updates.”

This puts Parler in quite a pickle.  Parler's chief John Matze says he refuses to comply with Apple’s demands and is "contemplating" a lawsuit against Apple, so we could indeed see Parler app updates around the summer of 2037.

While Parler was sipping champagne while petting a fluffy cat next to a cozy fire, nice and snug with an app store and embedded commenting in some large conservative publications, Gab has been naked in the woods, foraging for food and building a new community, with its bare hands, decoupled from Silicon Valley. 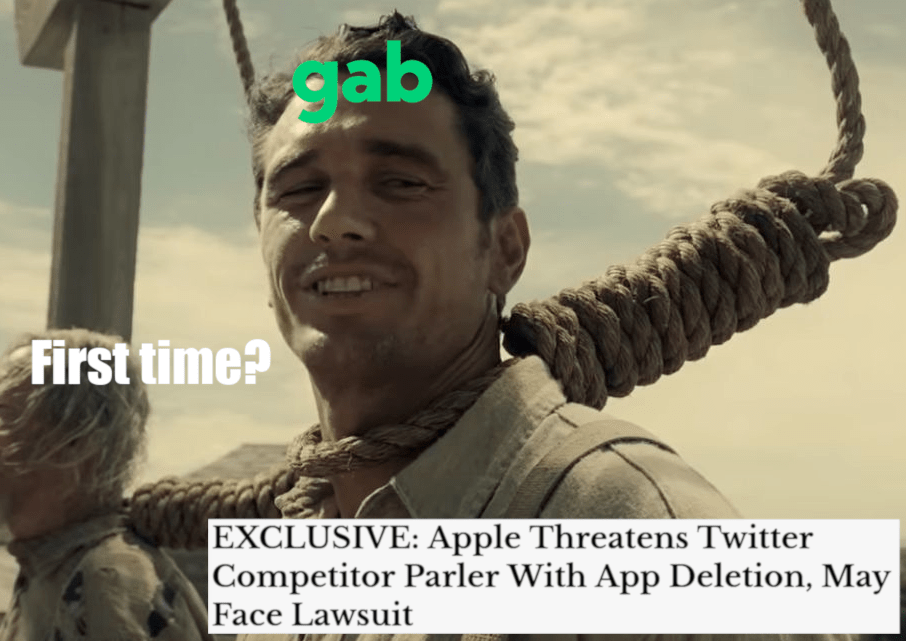 To continue the survival metaphor, Parler was enjoying a nice cushy life in civilization, and now they just crash-landed on a remote island like Tom Hanks’ character on “Castaway”.  Parler is not yet hungry and is still looking for food in the washed-up parcels, but soon they’re going to need to learn to survive.  While Parler has yet to learn to fish and start a fire, Gab has a budding civilization in the forest with running water, heating, plumbing, and shelter.  Gab will soon be laying cement and building skyscrapers after the cut-over to Mastodon.

What’s Parler’s next move?  Are they willing to begin the road paved by Gab?  Would they uproot their platform and migrate to a completely new decentralized framework?  It’s easier to bend the knee, and depending on Parler’s stakeholders and management, likely.

If I’m an investor or stakeholder in Parler, I’m pointing at Gab chief Andrew Torba and saying to Matze “look what he’s done to protect and grow his platform and company.  What are you doing, and are you willing to sacrifice as he did?”.  I don’t know anything about Parler’s stakeholders, but I'd imagine there’s going to be a lot of pressure on Matze.  I saw his interview with Epoch Times and he seems like a smart and capable guy.

Parler’s core is their commenting system (I registered to comment on an Epoch Times article) and their social media functionality seems to be secondary.  Websites that embed Parler won’t dump them in the near future so they can maintain baseline user growth as Apple inevitably bounces them and other providers sever ties.

If Parler makes a move to a decentralized system, what are the challenges to integrate their established commenting system into that platform?  Messing with something that works, especially your core money-maker, is always dangerous.  What resources are required for when and if that decision is made?

Gab’s commenting system Dissenter was secondary to their social platform and now it's integrated with their network.  With Dissenter plugged into the Gab paradigm, it’s a short leap to offer comment embedding for websites and would directly compete with Parler.  Gab would have a more complete, stable, and decentralized system with a much larger user base.  This large user base would be incentive for websites to opt for Gab's commenting application and likely siphon some market share from Parler.

While Parler is figuring out a plan and how to adapt, Gab would likely set up a news feed for us small and independent sites that use their commenting system.  This would increase traffic for our sites and provide value for users and allow for a Gab-based advertising network, and oh boy we’re off to the races. I’d publish ads via a Gab ad network on this site.  Oh man, a decentralized Gab ad network out of reach from Silicon Valley powered by crypto transactions?  The meltdown in Palo Alto would be like Fukushima.

In conclusion, I think Gab is just too far ahead and more durable and battle tested than Parler.  Gab knows how to survive in an MMA fight, while Parler just took their first punch.  Torba has proven to be tough, won’t sell our data or compromise our privacy, has stared down and slayed some show-stopping dragons, and can be trusted to head the platform.  Gab's leadership is tested while Parler is still figuring out what just hit them.

Gab and Parler seem to be looking at the big picture in terms of freedom of discussion, integrating commenting on articles and news, and allowing for growth of a network overall, but Gab has clawed their way to the top and achieving true independence while Parler has a long journey of decisions to make.

On a side note, I wish Parler would make the decision to migrate to Mastodon and federate with Gab, but only because I’d love to watch Eugen Rochko’s reaction over his creation that will give a voice to two major communities of us mean ol’ right wingers.  I’m laughing as I type this thinking about it.

(Here’s a sneek peak of Gab’s new system under development on Mastodon... thanks Eugen!): 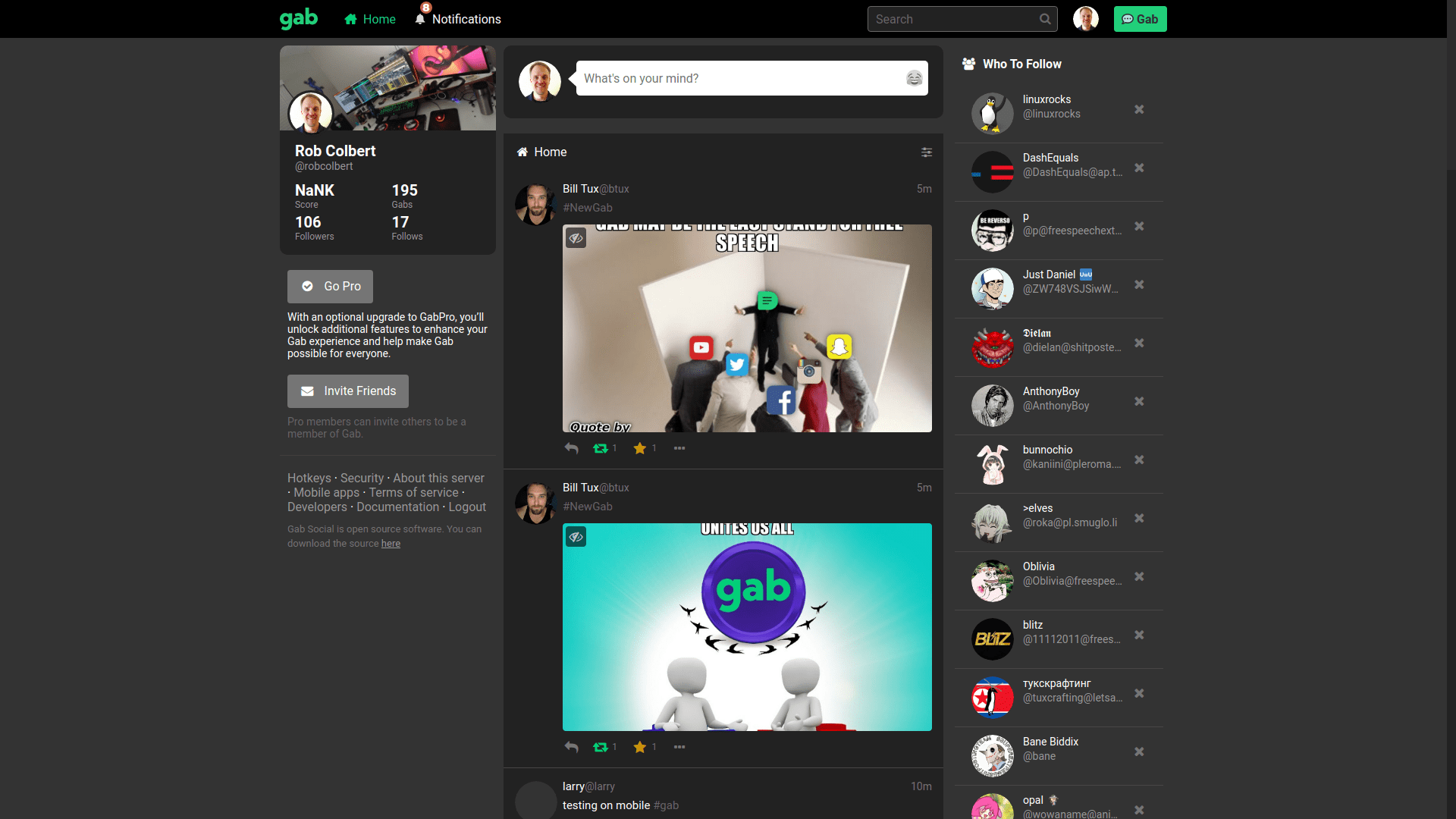 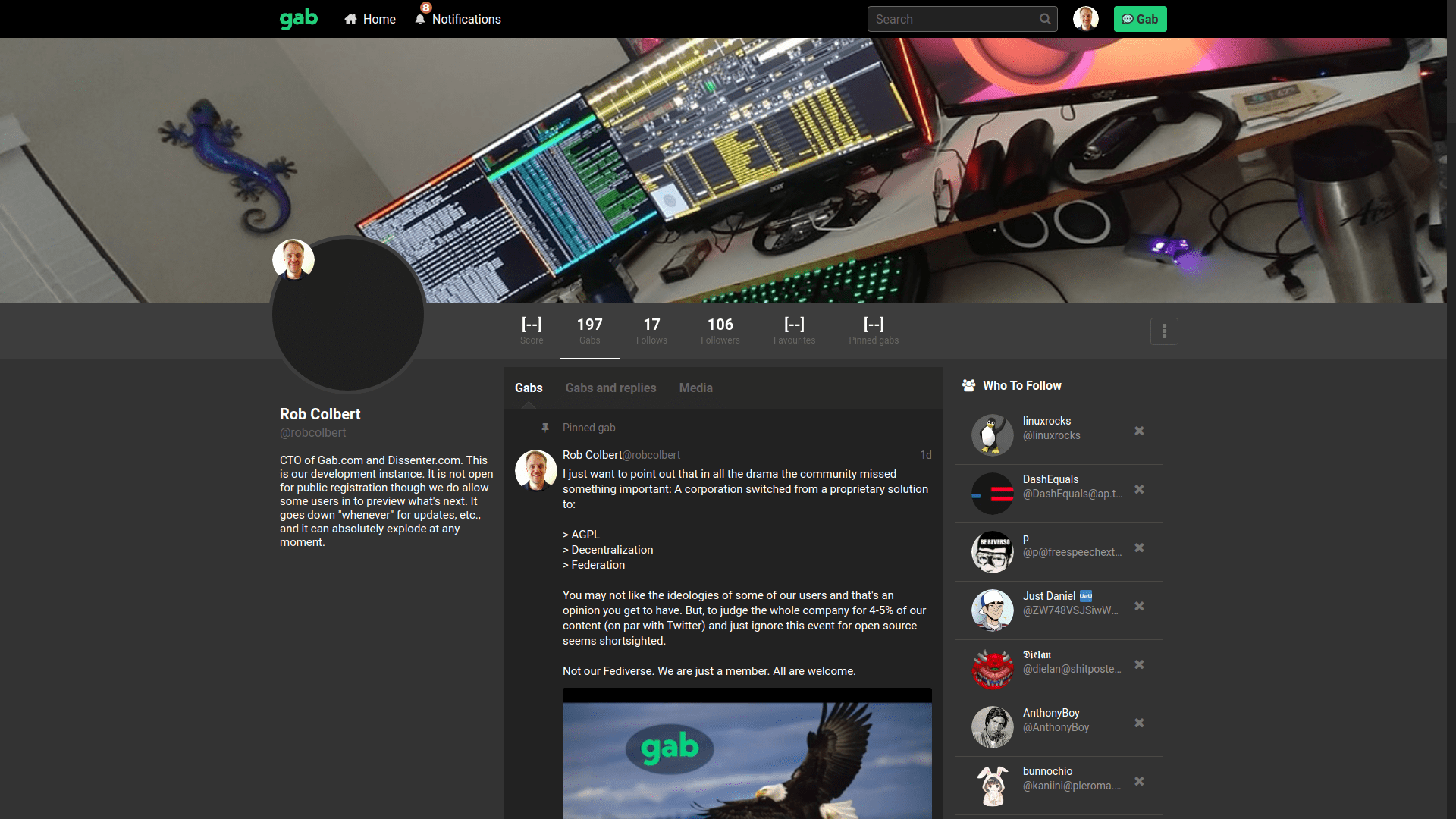 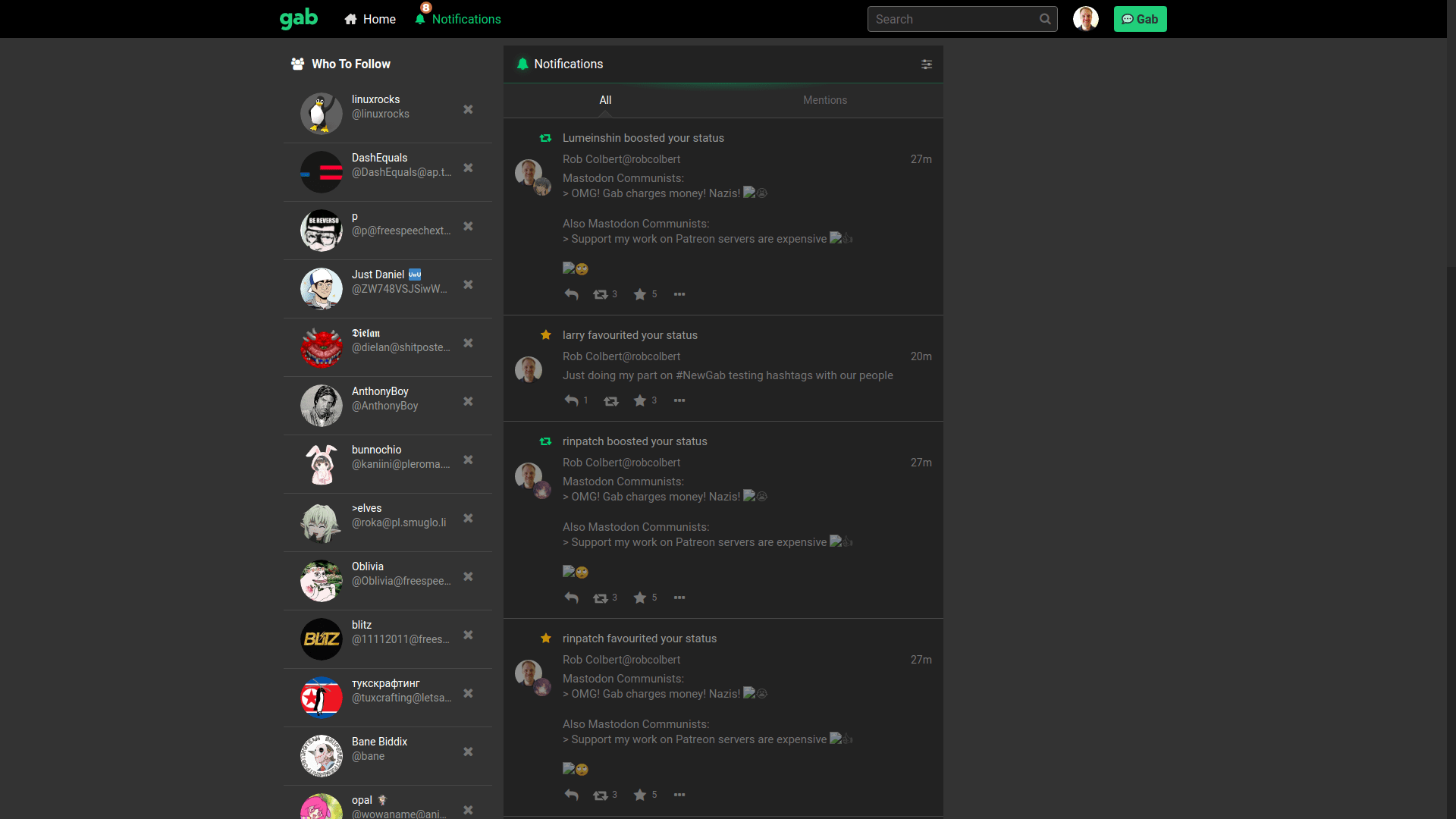 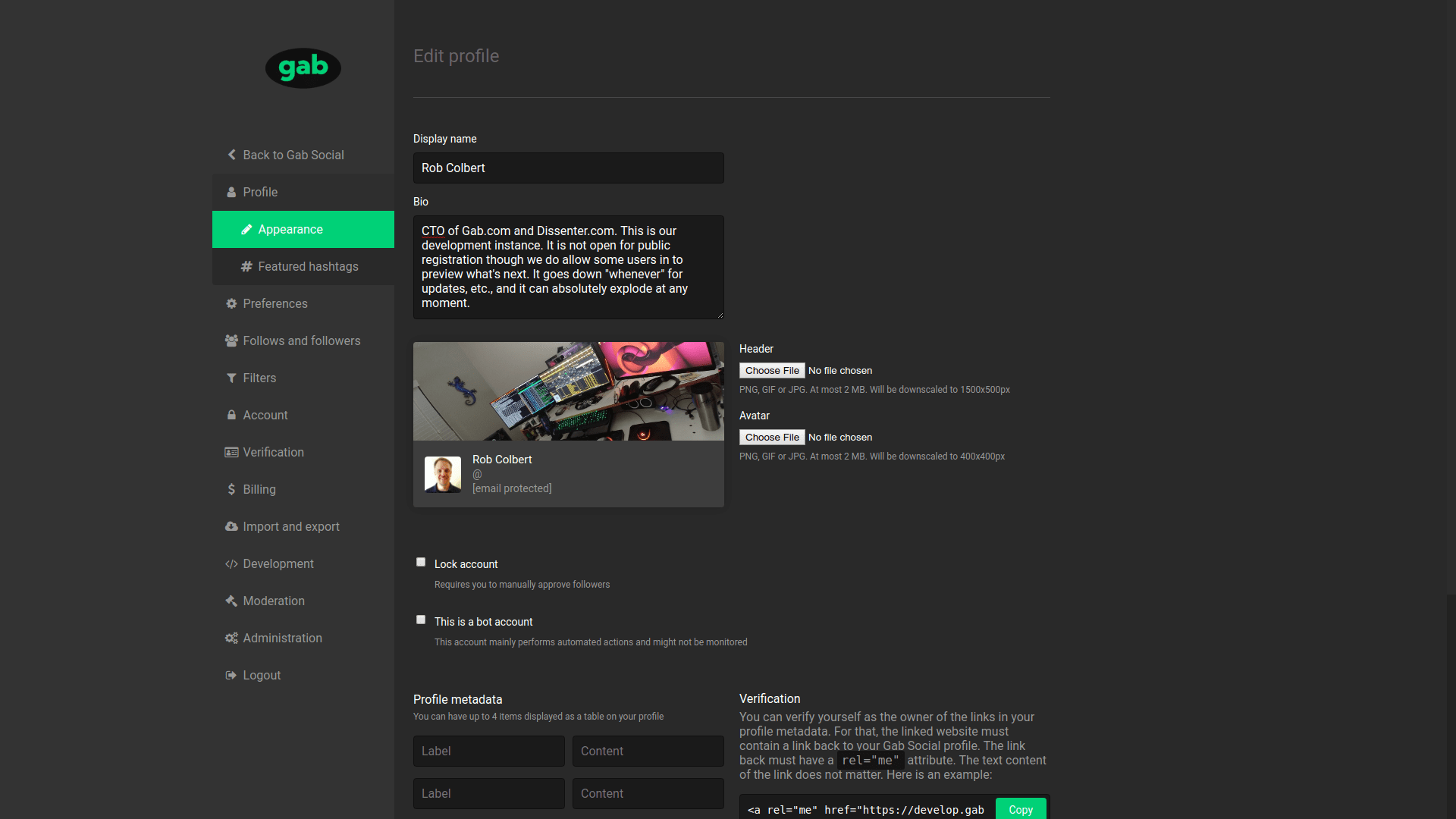