This year we have an incredible opportunity to put normal, pro-American economics and issues in front of the world stage juxtaposed with radical inherently anti-American Marxism.  The representatives of America versus anti-America would be Donald Trump, who has the wit, knowledge, patriotism, courage, and now presidential experience, versus a bumbling corrupt moron who thinks “breadlines are a good thing”, actually believes in the global warming hoax, and thinks murderers should be allowed to vote.

This would be a dream come true.

One side is rooted in human nature and God given rights, where freedom and liberty allow people to thrive and live independently via our free-market capitalist system secured by a constitution that protects private property rights and protects us from a tyrannical government.

The other is an ideology void of free-thinking, where top-down control is held by a small few who make the laws and control the military.  Government controls private property, and where you could kiss freedom of speech goodbye.

One is the pursuit of happiness, and the other, without exception, is always destined for misery.

If Sanders is allowed to achieve the Democrat nomination, Marxism and its derivatives will be set back a hundred years.  Bernie can’t do what most Marxist professors can do when confronted with an argument for freedom.  He would have to address it on a world stage, and Trump’s media arsenal would leave Sanders with no place to hide.  Bernie's media arsenal, however, are currently in hiding.

With the advancement of technology, sunlight is exposing Marxism at its worst, with the three biggest leftist utopias of China, Venezuela, and the former Soviet Union on full display, two current of which Sanders must address.

A few months ago, HBO had an excellent mini-series about the Chernobyl meltdown that happened in 1986.  I was surprised at how effectively it came across to many who don’t really follow politics, or haven’t considered what communism really is.

Young kids who were born in the United States assume private property rights and freedom are a normal thing in other countries.  This show had huge ratings and woke a lot of people to what communism looks like.  Thanks to the internet, those who lived under the Iron Curtain relayed on forums and social media the most amazing stories of how they lived.

China, along the same vein as the USSR in terms of a major problem they’re dealing with that effects others outside its borders, is dealing with a horrific virus.  During the Chernobyl meltdown the Soviets kept things quiet as possible and communication of the problem completely shut down.  I believe thanks to technology, the CCP could no longer hide this problem, where even President Xi addressed it today.  Deadly pandemic aside, China’s common Marxist-bred problems have been on full display, like an inability to feed its people and complete top-down authoritarian control.

Venezuela, like Cuba, is another hot Marxist mess, praised by Sanders as a place where the American dream could better thrive, and where they have a superior socialist health care system.  For example, are you a female doctor who spent many years and sleepless nights in medical school?  Great!  You can move to Venezuela and become a prostitute.  I’ve known a few doctors over my years, and I can’t remember any who’ve had to resort to servicing people like Hunter Biden.  I guess Bernie-supporters would make the case that they’re at least free to be prostitutes, unlike here where it’s a crime.  OK, you got me.  (I still think I have the solution to Venezuela’s food problem).

When the world is watching, Bernie's policies don't look very desirable to normal Americans, and next to Trump's, they'll look outright alien.

When Bernie is asked about nations where his policies thrive, he doesn’t seem too eager to indulge.  Contrast that with Donald Trump.  Do you think he’ll shy away from tax cuts and energy independence?  Law and order?  Do you think Trump will shy away from the results of his America-first policies?  How will Bernie run against Trump's immigrant policy, importing illegals trying to flee countries Sanders says are better than us and from whom we can learn?  Bernie will be a sitting Marxist duck, and I'm not so sure the moderators will help bail him out.

The entire world would be watching Trump versus Sanders.  There is literally no position or issue where Bernie wins.  Can you think of one?  During the Democrat clown show, I’ve been wondering who would be the most fun candidate for Trump to run against for the purposes of our entertainment.  I’ve now adopted a new perspective about who would be best for the country.

Forcing Bernie, who is the most visible in terms of promoting the benefits of Marxist misery, to intellectually defend a losing platform is no winner for their movement and will knock it back for generations.  People will remember for decades how Marxism had a chance to shine against freedom on the world stage, but instead shocked millions into realizing what a miserable system it is, and how disgusting one would have to be to vote our way into it.

That would be an incredible thing for our country. 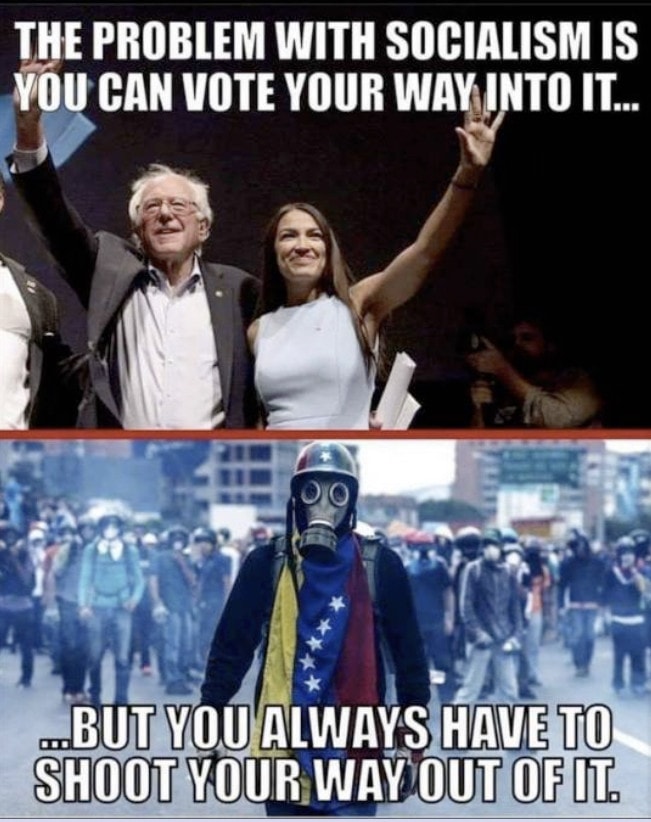