It may seem odd that Obama and Hillary don’t like Bernie.  After all, they’re all communists with a seething disdain for all things America.  Why would they have a problem with someone who’s been publicly anti-American for decades?  It’s a simple answer.

Let’s take stock of a few facts.  Obama, Biden, Hillary, and all their cronies are beyond corrupt.  I know, shocking.  We also know Bernie is corrupt, worse than we thought, thanks to Peter Schweizer’s book, and other odd tidbits, like the commonly used book publishing scheme.

Obama and Hillary worked damn hard to set up a gravy train that would pay dividends for the rest of their lives.  Heists such as the Iran deal, Obamacare, the Ukraine mess, and others would give them unlimited funds and power, post presidency.  This also explains the panic by everyone when Hillary lost.

To keep this deep-state gravy train moving requires an operative to hold the Oval Office (which was the plan with Hillary).  If Bernie were to become President, he’d become the deep-state favorite and benefactor of all the corruption that comes with it.  Bernie would make Biden look like a kid who stole a pack of gum from the convenient store.

Trump was the biggest monkey-wrench of all time.  The more we learn daily, the more the panic and complete irrational behavior by D.C. after his election makes sense.  Trump is the first President to not be controlled by the powers that be, hence why he can rein in China and cut off the deep-state at the knees.

Obama’s role was to move the agenda along as the executive, doing what he was told and when.  “Mr. President, sign this executive order”; “Mr. President, promote the Iran deal in this speech”; whatever needed to be done at the executive level as a cog in the deep-state wheel, that was his role, just as congressional representatives owned by the deep-state carried out their roles.

It’s important to grok, the President is a temporary occupant; the entrenched deep-state is there for life.  We revere the presidency and are in awe of the Oval Office.  These deep-state guys, like the Vindmans, Bill Taylor, George Soros, and countless others we will never know about, see the President as a nuisance that needs to be tamed and brought to heel every four to eight years.

Obama’s preferences of Kamala Harris and Deval Patrick are no longer viable.  Biden is only running to stave off justice, and the only choice left who would be a friendly is Pete Buttigieg, hence why you see him rising in the polls and coddled by the media.

Why would Obama back anyone with no shot at beating Trump?  Because they’re not counting on a victory at the ballot box.  They’re wishing and praying the deep-state will take out Trump before the election, leaving a clear path for the Democrat nominee.  If they don’t have their candidate in place with the nomination, then it matters not (or not as ideal) if they got their wish.

Bernie is their fly in the ointment who has his own corruption agenda that doesn't include Obama and Hillary.  The other reason they don't like Bernie is he's not in it to win; he's in it to drive his stock up and cash out at the right time.  This causes problems for someone friendly to Obama and Hillary, and showing how unpopular the other candidates are.

Ideology or electability is not the issue.  It's making sure a friendly is in place for the nomination for when they take out Trump.  Thankfully, that won't happen because Trump outsmarts them at every turn. 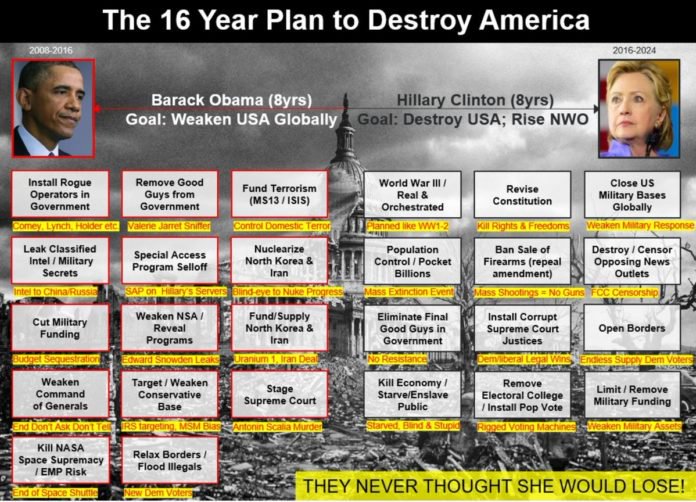