I know it looks bleak to the average news follower, but I'm more confident than ever that we come out on top of this transition of power back to the people.  When you exorcise a demon, the subject is going to thrash around a bit and get a few bruises.  Removing the "deep" out of the state will cause a little turbulence.  Don't bitch out now just as things area getting good.

Here's the situation as I see it:

The reality: the President has them surrounded.

"But DC, you said Pence was a good guy!".  That's not correct; I gave him the benefit of the doubt, and I was open minded:

Mike Pompeo went on a tweet storm, posting a bunch of pictures with Mike Pence cut out.  The timing of all of this seems to revolve around Pence's duty under the Twelfth Amendment, where he decides the integrity and validity of the Electoral College votes.

Why would Pence have a problem with this?  I don't think he does, so I'm thinking much of the Pence hoopla is diversion and disinformation, but again, I'll change my perspective if evidence is presented.

"But DC, you said Pence was going to suspend the ECA and throw it back to the legislatures!".  True, I really believed he'd do the right thing, as I never had any reason to believe otherwise, but I never said it was a certainty.  Sure, he wasn't a chest-pounding conservative, but to completely sell the country to China, I never thought he'd be capable of that.

“Keep your friends close, your enemies even closer.” -Sun Tzu

I also said regardless, it wouldn't matter:

Ultimately, none of this matters.  President Trump will be sworn in for a second term regardless if any Pence drama transpires.  Until then, I anticipate him doing the right thing, otherwise, it would be the greatest shock of all.

I also said this back in November regarding contingency to the legal process:

President Trump has control of the military, and ultimately, at the last minute, he can round up the coup plotters.  If he did that, he'd have the OVERWHELMING support of the country.

Sound crazy?  Why?  Go back in time to 2011 and tell yourself about 2020.  How crazy would you sound to yourself?  In the end, the President can pull the trigger because if we lost this election, voting would officially be a thing of the past, and we'd need to get ready for Chinese rule.  Nobody would trust our elections ever again, especially after getting a peek behind the curtain.  Therefore, he’d be perfectly justified using extreme measures to save our country.  In fact, he'd have to.

Ignore these geniuses who say "2022 will be a red wave if they win!".  We already had a red wave on November 3rd.  No politician currently in office would have any fear of the people, as they'd control the election system.  Who cares about 80mm MAGA?  They didn't care about 71mm.

This isn't a legal battle.  If you’re a negative Nelly, just rest assured that the President has that nuclear option in his back pocket and can, and likely would, use it as a last resort.  I have to be honest, I would love for him to use it.

That hasn't changed.  Trump is still taking the deep-state into deep waters where they don't want to be.  Don't think so?  Why are they scrambling right now for impeachment and execution of the Twenty-Fifth Amendment?  With eleven days left?  That doesn't sound like confidence to me.

“All war is deception.” -Sun Tzu

Another point, many are letting the CCP-controlled media and Big Social wear them down.  The CCP-controlled media has been hardcore against Trump this entire time yet he still won in a landslide election.  In what universe do you think the majority of people wouldn't support him for executing something that would otherwise seem "extreme"?

True, support means nothing in the end without a secure election system.  Want to spot grifters?  When you see someone on MAGA say "we lost, but we'll get them in 2022", that's someone who really doesn't get it and wants to keep the gravy train rolling.

I have no problem with people on team MAGA making money, and in fact encourage them to do so, but it should never get in the way of putting out a true message.  Fact: there are no more elections with the current system, period.

We undoubtedly voted 100mm strong, yet they rigged it right in front of our faces.  Why would they be incentivized to undo that system?  They wouldn't.  Regarding Congress, they've crossed the line to where they must now keep this election system in place at all costs.  A valid and secure election while running against MAGA at this point is their worse nightmare.  For example, do you think Kelly Loeffler could now win Georgia under a clean election?  Ask Lindsey Graham.

Back to the current challenge: how are they going to dump evidence over the last few years, all the way up to the election crimes and foreign influence from the DNI report from XO 13848?  I think this is where Space Force comes into play.

All CCP-controlled cable, network, and social media has shut out the Trump team.  Gab is still open, but as usual, they're crippled with a user surge when we need them up, but I'll digress.  Parler is about to be completely hosed.  How are they doing to get the message and information out to the masses?

It will require a communications medium completely outside of the current CCP-controlled systems.  It's no secret the Trump administration has been putting satellites into space, and there's been plenty of evidence they've been working on a new satellite-based internet system.  For example:

JOHN RAYMOND: Just within the past few months, we've seen Russia maneuver a satellite with characteristics of a weapons system.

BOYCE: Raymond says his new service has already been busy intercepting threats in space from Russia and from Iran. The general adds the Space Force has helped with the nation's coronavirus response, like in optimizing Internet bandwidth for Navy medical ships. Yeah, that's part of their mission. Air Force Secretary Barrett says the force is recruiting applicants with STEM backgrounds, computer scientists...

Elon Musk has been been testing his new satellite-based internet system called Starlink.  Point being, we're leaving behind the insecure, slow internet as we know it behind.  This will destroy the CCP-controlled infrastructure.

Many things come into light in retrospect.  For instance, why has the President been "soft" on the CCP-controlled media, like Big Social?  Why has he not put them in the ground?  I think it's because he's going to force them into irrelevance with a new internet.

This new internet will be secure and hardened from CCP control.  While leftist idiots in tech (like politicians who know nothing about tech) make fun of Donald Trump, he does things like push for a quantum internet.  I'm about thirty years in the software/cyber world and it even blows my mind.  I don't know if quantum will be a part of this sooner-than-later medium, but common sense says we're moving away from legacy CCP-controlled networks.

This new network will be the medium used to show all the masses the mountains of evidence, cutting the CCP-controlled media completely out of the loop.  How do we know that evidence is on the way? 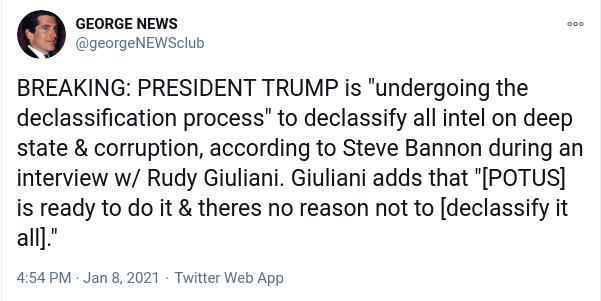 All the pieces are coming together at the right time.  Example?  Yesterday, Space Force became the 18th office to support the intelligence community.

“If the enemy know not where he will be attacked, he must prepare in every quarter, and so be everywhere weak.” -Sun Tzu

The President did not concede, and continues to keep the enemy in a state of panic.

Team MAGA, let's be careful with the Epstein-John Roberts story