For the record, I really like the independent publication "Wisconsin Right Now".  They cover stories that are verboten in main stream media, including the 2020 election coup, and have a strong conservative stance.

Their tag line is "Unintimidated", but in an article regarding decertification, they take a knee and are cowering before the leftist media, with hands up covering their face, begging not to be slapped like little bitches.

The article begins by acknowledging "there were serious problems" in the 2020 election.  That's way too soft for my liking, as it was an outright coup, but I'll let it slide.

Here's where they begin to go off the rails:

But the media want to ignore those serious, egregious problems by obsessively shifting the focus to a Wisconsin election decertification narrative because they know it’s helping Democrats going into the midterms. The media are in a feeding frenzy over the decertification narrative, a point made obvious by the number of stories and their obnoxious tone.

Any political stance adopted because of reasoning that begins with the statement "but the media" is one of fear and submissiveness.  The GOP has a history of fearing the media, and brain-dead consultants for decades told candidates "don't talk about that, because the media..."

We own the issues.  We DO NOT let the communist-controlled media dictate what we can or cannot do, or prevent us from doing what is right.

"But but DC, there's still a lot of old people who listen to the media!"

If that mattered, Trump would have lost in 2016, and not won in a massive landslide in 2020, to the point where he broke the algorithms and ballot trafficking tallies, and they had to break the glass and shut down the counting in the middle of the night to figure out how in the hell they were going to steal this thing.

Second point on that, it is NOT helping the Democrats, and in fact, it's hurting the RINOs who refuse to do what's right.  It was the Republicans who stole the 2020 election.

More cowering from the media:

The media have falsely tagged all state Republicans with this; just look at the headline in Rolling Stone. “Wisconsin is ground zero for the MAGA effort to steal the next election,” it ridiculously blared, revealing the legacy media template.

Oh, the "Rolling Stone" is making us look bad?  Damn.  Next thing you know, celebrities getting awards will say bad things about us during their acceptance speech.  We can't have that.  Well, it's over. Thanks for reading guys!

Or wait... maybe we don't let the "Rolling Stone" dictate our conservative positions, or allow criminals to take control of our elections?

Maybe we don't care about the "Rolling Stone", the same publication who made up lies about President Trump, to the point where they were forced to retract?  Maybe... just maybe... we don't give the "Rolling Stone" any respect and we use the magazine for the purpose it serves best: parakeet cage liner.

For a publication with the tagline "Unintimidated", Wisconsin Right Now sure sound intimidated.

Actually, there is no widespread groundswell among Republicans for decertification, as far as we can tell. There is certainly no evidence for such. People do have legitimate election concerns.

Not true.  In fact, there's a growing number of counties calling for decertification.  Last count there were twelve, and that was BEFORE Justice Gableman's latest report before the Assembly.

The groundswell pressure is so great that RINO Speaker Vos has been backed into a corner, to the point where he was forced to admit the election was no good.

Here's where the authors REALLY don't get it:

The bottom line: The best way to ensure election integrity is to elect a Republican governor. There’s a limit to what legislative Republicans can do with a Tony Evers’ veto perpetually looming. Getting a Republican Attorney General is also important; Democratic AG Josh Kaul is an ideologue who wouldn’t even investigate the Racine sheriff’s concerns.

Electing a Republicans is NOT the best way to ensure election integrity.  It was REPUBLICANS who stole the election by allowing the state officials to change rules, illegally certify the votes, and blocked investigations in the various states.

The election was stolen because of Republicans, yet the authors are just fine as long as there's an (R) next to the name.  We need true Republicans in these seats who are willing to take this ball into the end zone and preserve our Republic, even if the "Rolling Stone" calls them mean names.

That’s because it’s given the liberal media the opening to falsely smear all conservatives as crazies and all election integrity concerns as conspiracies (they are not).

These guys really care what the leftist media thinks and says.  I just don't get it.

The best way to get Joe Biden out of office is for Donald Trump to run again and focus on Biden’s endless deficiencies and failures (there are so many of them!), not on 2020.

The communist-controlled media, which clearly has an affect on how the authors take political positions, have tricked them into making decertification in Wisconsin about removing Creepy for President Trump.  While this indeed will be the ultimate end result, the authors have accepted this ridiculous narrative.

If Trump makes a 2024 run, he must abandon decertification and push for election reform.  He needs to focus on the abysmal record of Joe Biden. Voters want to look forward. The governor’s election needs to be a litigation of the failed leadership of Evers and Biden, not of the 2020 election.

Yeah, no.  That's the worst thing he could do.  Why would he abandon decertification if the election was stolen?  Why would he, which is to say us, allow the criminals to win?

Election reform is happening regardless, as the authors noted in their article, but the enemy CAN NOT, under any circumstance, be allowed to hold onto an official victory.

The media focus on decertification because they know that it hurts Republican candidates with independent voters. This was borne out by the cross tabs in the latest Marquette Law School poll. The issue doesn’t sell. In that poll, 68% of independents were confident or somewhat confident that the results of the 2020 election were accurately counted (that’s true of 38% of Republicans and 96% of Democrats.) The percentage of independents with at least some confidence in the election is still 56% when leaners are considered separately in that poll.

Marquette puts out crap polls, and that poll was from January.  Let's see that poll again after Gableman's report and the public now aware about the elderly care homes.

Former Supreme Court Justice Michael Gableman, the special election investigator for the Legislature, tossed decertification language into the end of his recent report, a reckless and unnecessary move that distracted from everything else credible he found.

There was absolutely nothing reckless about it.  It was his obligation, in fact, because the election was stolen beyond any reasonable doubt.

Legislative leaders were caught off guard because they didn’t know the decertification comments would be in the report. This forced them to field endlessly media inquiries fixating on just that point, deflecting from the other serious election problems raised in the report.

Good.  Sometimes it's best to throw them into the pool and watch them swim.

James Bopp, a GOP-hired attorney told Assembly Committee on Campaigns and Elections, it had the constitutional authority to act after the 2020 election before Electoral College votes were counted on Jan. 6, 2021, but not after. He said the 2020 election was flawed but legislators should focus on reforming elections procedures.

“The only way to remove President Biden is by his death, resignation, impeachment or disability under the 25th Amendment,”

Again, don't allow the communist-controlled media to do your thinking.  This has to do with the decertification of Wisconsin and down-ballot tickets.

The media are now demanding litmus tests of every Republican candidate. Do they ask all Democratic candidates about the Russia hoax, defund the police, BLM riots, or the Hunter Biden laptop?

All serious candidates should denounce decertification.

Again, the media does not dictate who the people elect.  This fear the authors have of the communist-controlled media is bewildering.

Decertification wouldn’t result in a change to the presidency regardless. Remove Wisconsin from the electoral map, and it still goes to Biden.

Then don't worry about the presidency.  Worry about Wisconsin, and don't allow the enemy to hold onto an official victory when they didn't earn it.

We can not let a cabal of criminals steal our election.  At the least, Wisconsin is obligated to take away their official victory.  Giving an inch on this is incredibly weak and cowardly.  It's the equivalent of negotiating with terrorists.  If you give into one, it opens the floodgates.

Forcing decertification would be the equivalent of sticking your invader's head on a pike. Do not give aid and comfort to criminals looking to try this again.  Let them know if they're caught, there will be a decertification, as well as other consequences.  At a minimum, it destroys the reputation of those who certified the election and deemed it secure.

If there's no decertification, the criminals attempting this in the future will have comfort knowing all they have to do is get this past January 6th, and the compromised judges and officials will give cover.

The certified election must be ripped out at the roots and raised high for everyone to see.  Do not cower to the RINOs and communist-controlled media because you are worried about how they will treat you.  They are what's wrong with our society.  Do not kneel before them.

Decertify Wisconsin now because it's the right thing to do.  Period.

While we're exploring a new commenting solution, you can comment HERE. 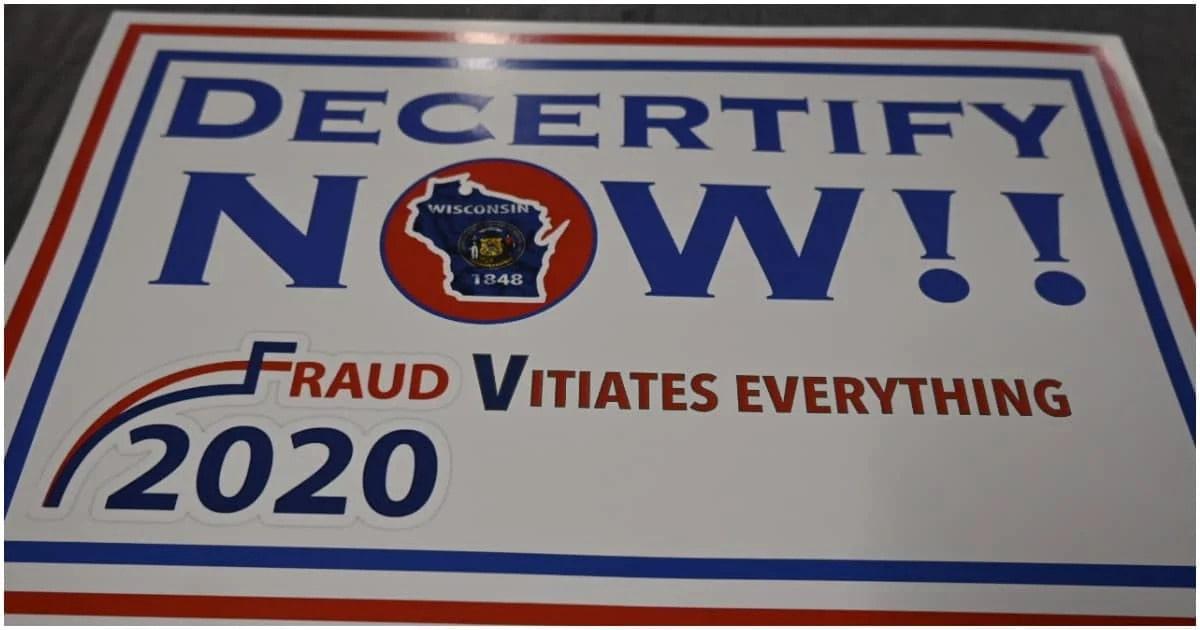