Last Tuesday Tommy Tuberville beat Jeff Sessions in a Senate primary runoff, sparking conservative media to dog-pile on the former Attorney General.  Sadly, some publications are even calling the guy a “traitor”.

The purpose of this article is not to convince you of Sessions' accomplishments (I've given up on trying to do that), but to lobby for consideration of the possibility that if Sessions had not recused, Trump would not be in office right now.  The President knew this, hence why he rejected Sessions' resignation.

Right now in July of 2020, we have mountains of documents, testimonials, interviews, book excerpts juxtaposed with hearings under oath, and more than enough evidence to say factually that Hillary Clinton, the DNC, and Hussein Obama and his intelligence and justice departments attempted a coup on the presidency.

These weren't considered facts to most Americans when Jeff Sessions took over.  Had Sessions not recused, President Trump would have not only been impeached by a Paul Ryan led House, but convicted and thrown out of office by a Senate comprised of John McCain, Jeff Flake, Thad Cochran, and other weak-kneed RINOs.

Case in point: devoted Never-Trumper Ben Sasse was going after Trump in May of 2017 over Trump supposedly asking Comey to end the investigation on Flynn.  It was a lie, and in fact the FBI closed the investigation on Flynn the previous month.  We learned this in May of 2020.  Is there any doubt in your mind that Sasse would have voted to convict the President in 2017 over any other lie?

The President was literally impeached for doing nothing wrong, and the Senate was a few votes shy of kicking him out of office.  He was impeached, even with the Chairman of the HPSCI caught in front of the world lying about the Zelensky call, and Biden’s quid-pro-quo admission on video played continuously in conservative media.  This impeachment was political, not objective, therefore why would anyone think a 2017-2018 Senate be any less political?

So, why did the Senate Republicans not vote to convict the President in the impeachment trial?

The reason why the President beat conviction in the Senate in February of 2020 is because he had incredible support from the American people, who just witnessed almost three years of the Mueller hoax.  The President’s popularity is his super-power, providing him a limitless well of political capital from which to tap.  No anti-Trump Republican Senator had the guts to convict because political hell would rain down on them in their red home states.

The President’s support is immeasurable for many reasons, mainly because we had three years to witness him keep his campaign promises, take on the deep-state, bring the economy back from the dead, build a border that’s stopping a third-world invasion, rebuild our military AND reclaim the technological high-ground with the Space Force, killed NAFTA and created the USMCA, signed tax cuts into law, appointed two-hundred federal judges, cut business-killing regulations – and I don’t have enough disk space on this website server to name them all.

We’ve won so much that we forget how far we’ve come.

In 2016 I wrote in Ted Cruz.  I liked Trump, but I thought he’d be a New York liberal.  In November, after everything the President has accomplished, I’d literally walk over hot coals to vote for him.  I feel this way now because I had three years to see his accomplishments.

We’ve had three years of information drip out of the intelligence communities and Department of Justice that we didn’t have in 2017.  Many people were still not sure if Trump had anything to do with Russia.  Now it’s a matter of fact that it was manufactured hoax to support a coup attempt, but in 2017 it wasn’t.

“But, we knew about the Page-Strzok texts!”.  Yes, because Rod Rosenstein released them.  If Sessions killed the investigation, they’d probably still be employed at the FBI.  We wouldn’t have had Kevin Clinesmith commit his crime of altering the Page CIA email.  Flynn’s investigators and prosecutors wouldn’t be under investigation by Jeff Jensen.  Alexander Vindman would still be employed, along with many other deep-state career criminals we got to know and hate.

The investigation had to continue to draw out the bad guys so they could commit their crimes.

President Trump: “You know what I did? A big favor...I caught the swamp, I caught 'em all.”

“Nobody else could have done that but me. I caught all of this corruption that was going on." pic.twitter.com/1MIgh0sY22

The intensely devoted support for the President he has now was not as strong in 2017.  The fact is if Sessions squashed the investigation, it would have been framed as obstruction of justice; even though it wouldn’t have been, any perceived gray area would have been a slam-dunk impeachment and conviction.

Sessions himself was under investigation.  Currently, the House Judiciary Committee is about to file articles of impeachment on William Barr; you don’t think Sessions would have been impeached and accused of colluding with the President to obstruct justice?

We even know for a fact they would have because of Matt Whitaker:

... And this is one of the things that Devin Nunes has been very clear about. Last week, he wrote a New York Post op-ed talking about my book and talking about this obstruction of justice trap that was set, not only for the President, but for myself and others, that if we had tried to put our thumb on the scale or somehow in their perception interfere with the Mueller investigation that they were ready, willing, and able to go after any of us, and so I just think that’s a very dangerous precedent. …I think it was inappropriate for them to do that, to set that trap. And again, I keep coming back to this theme, Jan, but I think it’s one of the important themes: … we need to not only learn these lessons, but make sure this never happens again.

Mr. Jekielek:  And presumably that’s the reason you didn’t end the investigation, because you didn’t want to get caught in the trap?

Mr. Whitaker:   Yeah, this is something that obviously, I reflect on and have reflected on.

What eventually happened?  Mueller reported no collusion and no obstruction, and like the IG report that followed, exposed criminal activity from the Obama resistance hold-overs.  Even with a clean Mueller report, the narrative in the media continues to be Trump and Putin are cohorts.

Same with conservative pundits.  Never-Trumpers as recent as the Ukraine fiasco thought it was “kooky conspiracy theory” that Biden was protecting his son, and that Trump was getting assistance from Ukraine.

Marinate on that point: the President was cleared of any wrongdoing, and it didn’t matter.  They spent almost all of the investigation on trying to engineer an obstruction of justice charge.  What would have happened if Sessions killed it early?

We needed time to outlast the lies.  The Mueller investigation proved to the world that the President was not involved with Russia in any way, and that could not have happened if Sessions squashed it early.  You supported Trump, as did I, but most people don’t follow this stuff closely and only absorb whatever social media seeps into their little brains.

False accusations taking the form of leaks were flowing out of the DOJ and IC; Sessions needed time to stop them, otherwise, they would have made him look like Trump’s comrade (they already framed Sessions up with Russians) and they both would have been destroyed.

Until the impeachment hearings were scheduled, I never thought they’d try that.  The fact they impeached him for literally doing nothing wrong gives a glimpse into the narrative had Sessions not recused.  It would have been “Trump and Sessions, comrades in arms” all day long.

They wanted to hit him with obstruction in other ways, but none of it worked.  Any plans to use Attorney General Sessions as a means for an obstruction trap against President Trump died the moment Sessions recused.

Before you call Sessions a traitor, maybe answer that question. 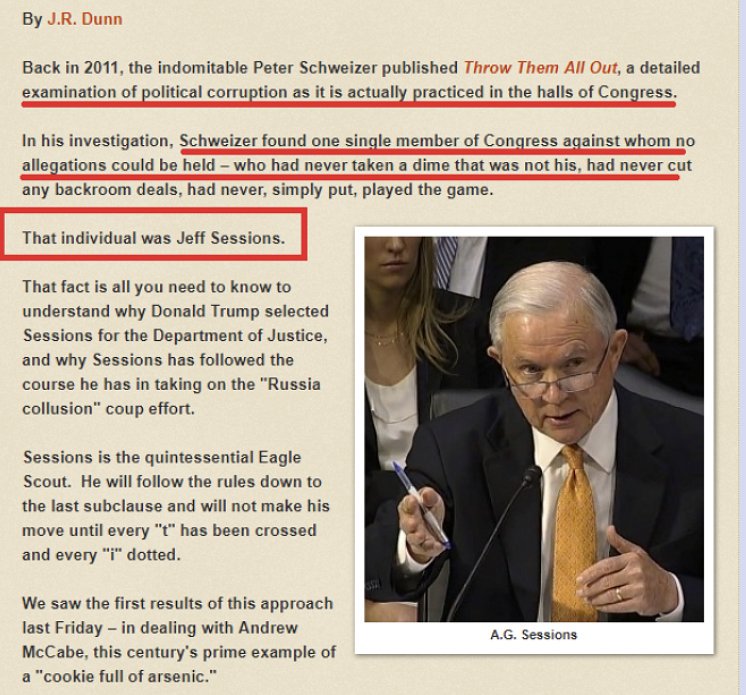