UPDATE: Erickson deleted his tweets I embedded, so I had to find the screenshots of them from the Wayback machine.  As ridiculous as they seem (especially as the Ukraine hoax evolved), I promise they are tweets he really did post with the upmost confidence and snark.

The never-Trump crowd has long trashed their credibility, but their desperation for a Trump misstep has morphed from pity to pure comedy of perpetual fail.  To showcase how damaging TDS is to one's brain, I'll post a few tweets from never-Trump founding father Erick Erickson regarding the Ukraine transcript fiasco.

At some point into Trump’s term Erickson decided it was too unpopular to remain under the never-Trump label and declared himself never-Trump no more; “never” was just a phase.  He’s even gone as far to say he’s going to vote for the President’s re-election.  I believe he’s “lacking candor” and will again endorse another late “challenger” like Bill Weld.  He even allows writers on his site to promote Weld, who suggested the President should be executed for treason.  Call me skeptical of him pulling the lever from Trump.

TDS not only affects your choice for Presidential candidate, but it makes news stories that are embarrassing and devastating for Democrats look like grounds for impeachment for President Trump.  Case in point, even a member of never-Trump like Erickson can throw an easy punch at Biden over influencing the firing of the Ukraine prosecutor to protect his son, right?  Wrong. 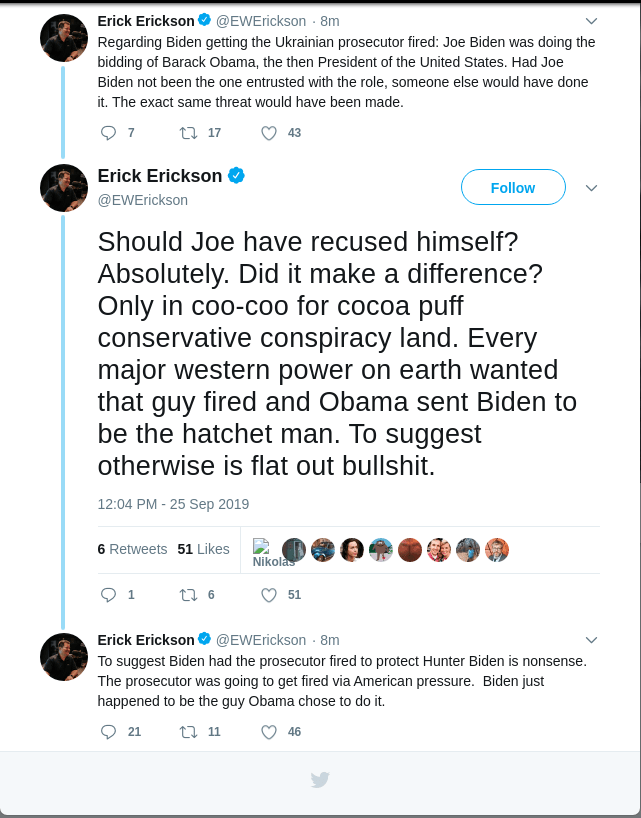 Yes, Erickson thinks people like Rudy Giuliani, Peter Schweizer, Mark Levin, John Solomon, you, and me are conspiracy theorists because it's plain as day that Biden fired the prosecutor who was looking into his son for getting paid from Ukraine, to Latvia, then Cyprus, then the United States.  Some evidence?  John Solomon has the prosecutor on the record saying he was about to interrogate Hunter before he was fired.  Well, surely this information got to Erickson so he could retract his mistake, right?  Wrong. 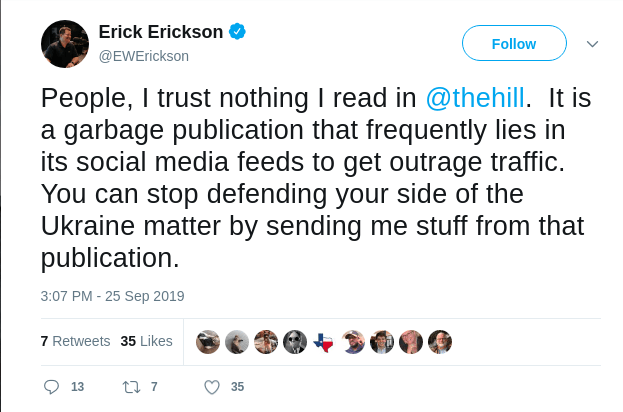 I guess it's no Bulwark.  I'm not the biggest fan of The Hill either, but they have Solomon, and while he's been digging on these stories for a few years, Erickson's been calling them conspiracy theories, even as time turns them into historical fact.

A plank of the never-Trump manifesto is to maintain the perception of a greater intellect than supporters of Trump.  We’re unsophisticated sycophants who blindly follow Trump because we’re attracted to shiny things and easily manipulated. 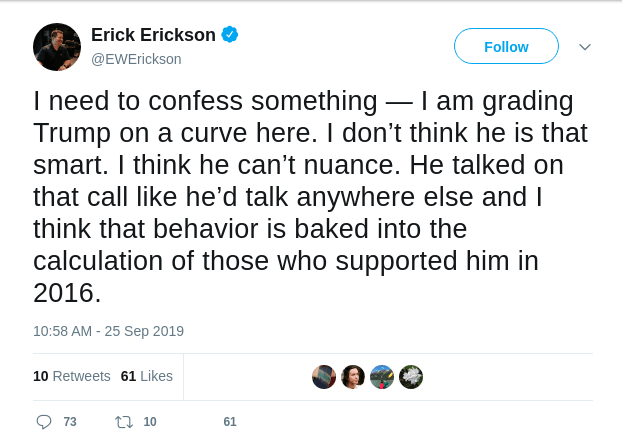 I concede I may not be the brightest bulb in the knife drawer, but my support for the President has been forged with logic, critical thinking, a lot of reading and listening to interviews and analysis, based on decades of life and business experience.  The President has earned my support because of his actions, his patriotism, what he’s doing for the country, and his excellent character.

The notion of a Trump impeachment is a fantasy they try to play down, like when your girlfriend asks you if you think the waitress she caught you staring at for an extra half-second is hot.  They want it, but they know how unpopular it is and how it impeaches their credibility.  Oh how badly they want to have a look but not get caught touching. 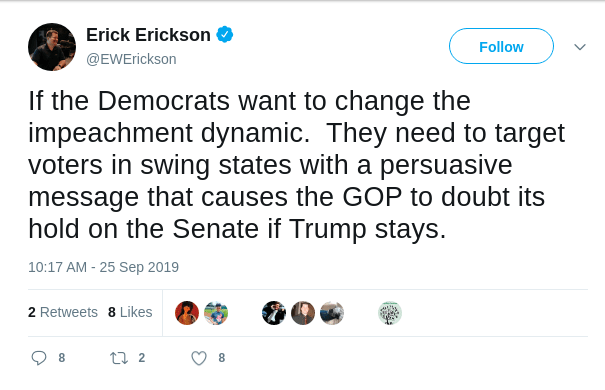 Quinnipiac put out a poll of everyone hating Trump.  He's taking on China, fighting against the media, the DC swamp, the globalists, and all the evil powers that be, but this is a poll that must be real so I guess he should just give up and step down. 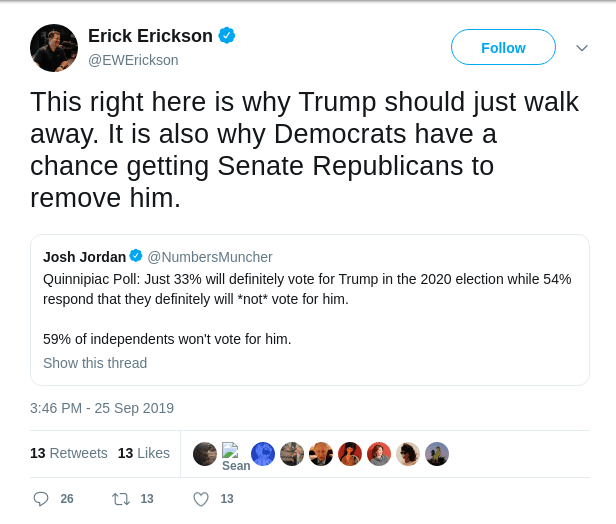 Here's where you'd think even a mediocre political pundit would have some fun with the Democrats, Obama administration, Clinton, the FBI, and intelligence agencies.  After everything that we know as established fact with Spygate and the failed coup, this is low hanging fruit, right?  Wrong. 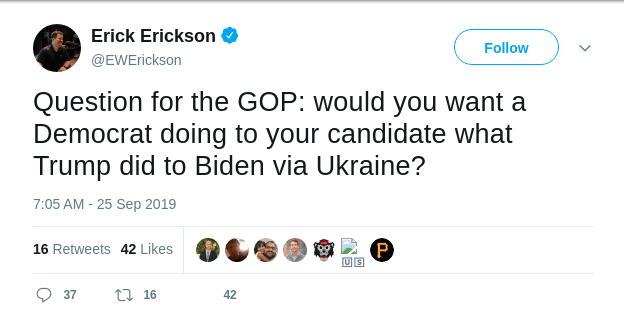 On Ukraine, instead of following this amazing treasure trove of Biden and Democrat corruption, he craps on the President by saying he did something wrong or untoward to the office, and calls real investigative journalists "conspiracy theorists" while tweeting about his disappointment over the media.

After watching Macguire's testimony to the House Intelligence Committee today, the enjoyment us Trump supporters have over how badly of a fail this is for the Democrats is euphoric.  For example, Adam Schiff admitted his version of the transcript was a parody, and it's a problem if we were too stupid to figure that out.  Seriously.

If you have a case of TDS, your brain may be seeing the testimony today from a very warped perspective.

I don't post Erickson's tweets to make fun of his condition.  I post it for awareness.  TDS seems to only infect grifters who long for the days when they could sell you on how smart and informed they were, and could point to a Democrat boogyman while they sell you books while losing.  With a President solving problems, the never-Trump members' value plummets and exposes how ridiculous they are.  Please pray for them.

To get a good breakdown from a serious and adult TDS-free perspective, listen to Mark Levin's show from Wednesday.  He even reads the entire transcript line-by-line.