Spoiler alert: it's not another social media platform.  But before that, a rant on "conservative" social media...

After GETTR's horrific and catastrophic fail before it even left the crib, it left a lot of us wondering what is the ultimate solution for a secure and usable platform?  Beyond any reasonable doubt, alternate platforms who care nothing about security, like GETTR, Parler, and Gab, are failed solutions.

Let me make this clear as day: currently, there is no secure social media platform with either the technical expertise, or care, to protect our private data.  Fact.  Nobody is coming for us.  We're on our own. (If you say "but Gab", I'll reach out of this screen and slap you across the face).

I don't want to be on a platform that's so unsecure that it seems to be intentionally providing our data to the enemy, like AntiFa-BLM, or worse, journalists.  Next thing you know you're getting a knock on the door to harass you about getting the jab, or they're threatening to burn down your house and shoot your dog.

Social media is now simply a means to harvest our data for the enemy to harass and intimidate conservatives and normal America.  That's a reality that we have to accept.

If you promote platforms like GETTR, it's no different than promoting someone like a Nigerian email scammer.  You are helping to hurt people who don't know any better by tricking them into giving up their personal data.

Indeed, some platforms are better than others.  I've heard good things about the revamped CloutHub.  Telegram seems to be fairly solid.  However, they collect personal data which will be cracked open like a piggy bank at some point.  Not if, but when.

If you're a former member of the Trump team and decide it's time to spread your grifter wings and get into the data collection business, you can always count on MAGA to flood your platform with their sweet, sweet data.

Just do some promotion giving the false impression that Trump will join, set up some accounts faking MAGA influencers, and you're off to the races until you're "hacked".  Whoopsie!  Even then, don't worry.

If you're Parler, Bongino will call you an idiot in public.  If you're Gab, Torba will go full Bernie and cry "but we're not millionayas or billionayas" and let the incident pass without a public hanging.  If you're GETTR, Miller will just get on Bannon's show to help spin it as "typical technical issues after a launch because it's so successful and pisses off the left".

One thought before I move to Eich's solution, with each of these security fails, I can't help but wonder if they were intentional.  GETTR, as an example, is so bad that you'd have to intentionally make it exploitable to the degree of which it is.  I'm serious.

I concede my off-track rant on the horrible security and leadership on these platforms may not be relevant to Eich's solution, but this GETTR stuff is still fresh and people in MAGA are STILL PROMOTING IT, so pardon me for being a little ranty here.

So, where does that leave us?  On to the problem and solution that will, in my opinion, kill Twitter (I'll explain why below).

People will use platforms they like.  Some have remained on Twitter, while others are Gab and Telegram.  Some will set up a presence on Gab, complain about how oppressive Twitter is, then crawl back over and set up their 19th account, get banned, then complain on Gab how they're still being canceled.

I still follow users on Twitter, like Jeff Carlson, WeRise, and others.  I'm no longer on Twitter, but I bookmark them in my browser to keep up with their posts.  Same for Telegram and Gab.  The point here is I follow users scattered among multiple platforms.

If Twitter bans Jeff Carlson, or censors one of his posts committing a thought crime, he doesn't own that post.  Twitter does.  I can't see it, unless it was picked up in one of the web archives before removal, but that's a pain in the ass to manage.

Eich's amazing solution is to have these posts preserved, and be able to maintain your friends lists, in the browser.  It's a solution "on top" of the social media platforms. 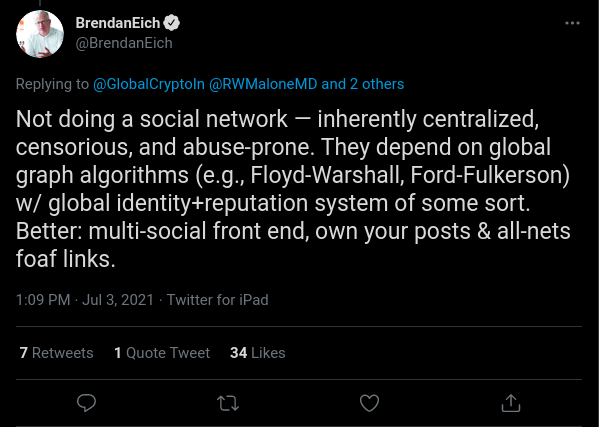 What I saw prompt this increased chatter for this functionality by Eich was when he literally bitch-slapped Twitter over their recent attempt to remove the ability to switch to your chronological feed from your home timeline view, which would essentially only show what they want you to see. 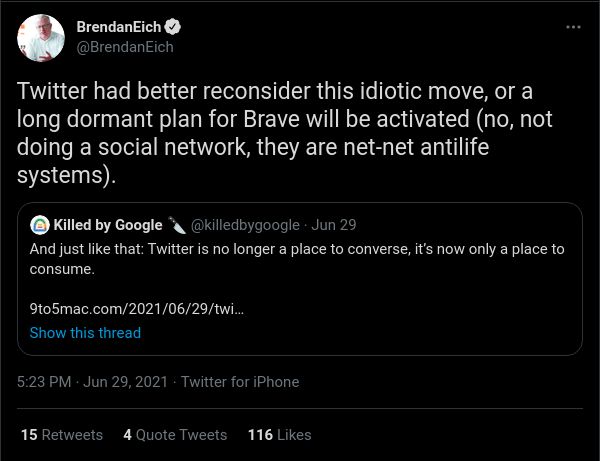 After Eich's smack-down, they reversed course and said it was "a bug".  Of course.

This solution will apparently be part of Brave Search in some form.  Imagine all of the accounts you follow, and watching all of their posts, real time, archived and immune from being deleted, even after being banned from that platform, or banned post.

You can reply to them, follow them as they change platforms, and all of this with 100% total privacy and no tracking.  This kills Twitter because it de-centralizes social media users.

Do you log into Gab to follow an account, then another platform to follow another?  When this happens, we're in a situation where we have to pick and choose platforms, or log into multiple.  I HATE that. (I'm currently only on Gab and refuse to join another until something halfway secure and stable pops up, or scores the President's account like Rumble did last week). 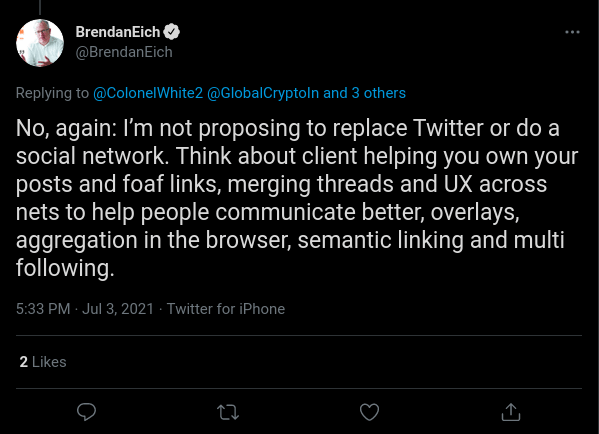 Why is Twitter still drawing breath?  Think about it.  Everyone is over there.  You still have to drop in to read most accounts.  Most of those accounts are there because everyone else is.  Take that centralization away, what happens?

What if everyone is everywhere, not just on Twitter?  What if you go to one source, which is your browser, and have all your accounts on their platforms?

Visualize it this way: go to Twitter, and look at your timeline.  Now pretend accounts you follow over on Telegram are now injected into your timeline with tweets, so you see tweets and Telegram posts scroll by.  Now pretend Twitter can't remove any of those. 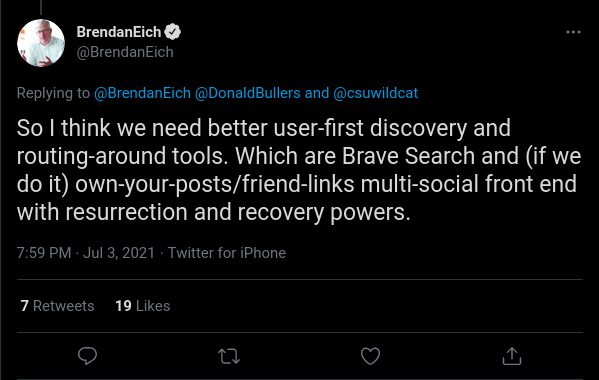 Think of the power Eich has.  He has the browser that's complete privacy and untouchable by the Silicon Valley communists.  Same with his privacy search engine, which has its own search index.

Right now, Eich is a giant monkey wrench who can jump into the gears of Silicon Valley any time he wants.  He already did to Mozilla and Google.  Twitter is next.

Thank the Lord Eich is on the side of the patriots. 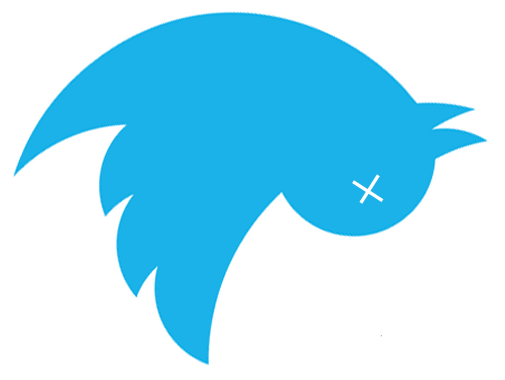