Gab has officially been crowned king of new social media.  Not only have they rolled out a new suite of functionality (except f*cking post embedding, of course), including GabTV (which is REALLY sweet), but Apple, Google, and Amazon have laid down the law on Parler.

This was not the first time Parler had its commie-controlled leash yanked, forcing them to heel like good subjects, but now they're in a dire situation.  Amazon is about to bounce them, which takes them completely down, and Apple has officially kicked them out of the app store, with Google following suit. 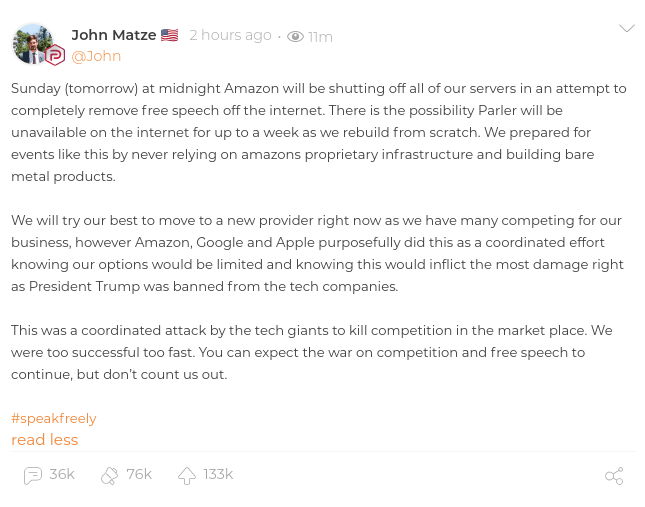 This post is hilarious and sad at the same time.  The sad part is he's completely ripping Gab's tagline of "speak freely".  With all those Mercer bucks, do they not have the savvy or creativity to develop their own?

The hilarious part is "free speech" on the internet will not be down while Parler is.  Gab will be running, albeit sluggish as Twitter and Parler users hammer the registration page.  Hey, if you're a Parler user, while they're down, pass the time by binging on some Gab TV.

Parler's credibility has been in the toilet over the past few weeks after conservative influencers discovered that their identities were not only stolen and used on Parler, but were VERIFIED, including Ron Watkins, Mindy Robinson, and James Woods.  That's pretty serious.

Back to the comedy, Matze is pissing off all the people you don't want to piss off if your membership base is MAGA: 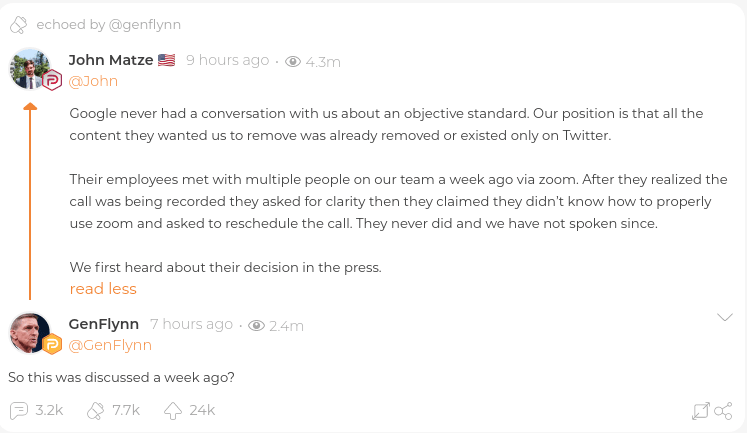 How about Sidney Powell?: 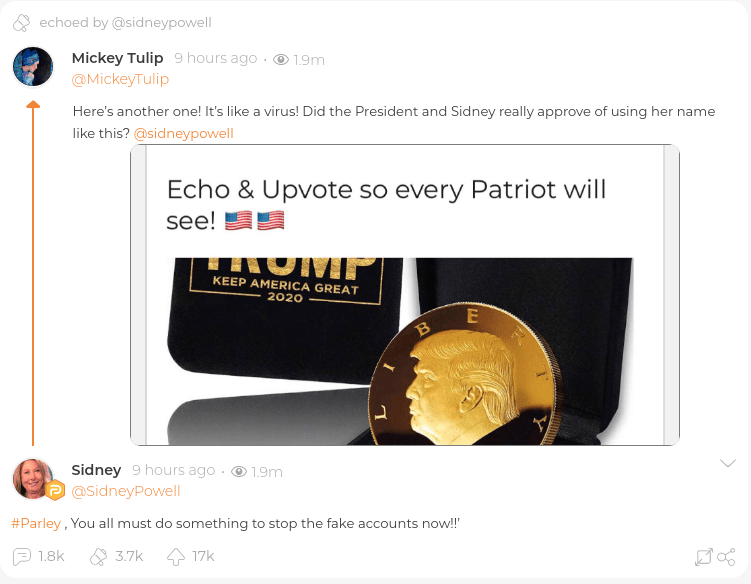 Congratulations Dan!  You're now part-owner of a clusterf*ck.  I gave Parler some props a few weeks ago because they did make some improvements, before Gab's latest upgrades, but after Parler's embarrassing security revelations they dropped back to joke status.

Seriously, Parler would be in better hands with the guys that took over Myspace.  Matze has no idea what he's doing, and yes, I'm more than qualified to make that assessment.  He's only getting tough with Amazon because they're already kicking him out, even after he took a knee before his commie masters by removing some of Lin Wood's posts.

Meanwhile, Gab is killing it.  Along with GabTV, they have a sweet new post composer, direct messaging, encrypted chat, and more.  What's really huge is the Boss may be coming over after being bounced from Twitter.  Yes, THE Boss!

Gab is managing their own servers and will likely endure performance issues over the next few weeks as they scale to stay on top of a Trump surge.  I know first-hand how big of an undertaking that is.

While Parler is down, their members will flock to Gab to pass the time, only to realize it's more fun and a superior platform.  Almost all of them will stay.  Why would the return to a lame, insecure platform?