Response to Bozhidar Batsov's article "Firefox is the only alternative"

This is more of a tech-related article, but I'm posting it here because conservatives have real skin in the game when it comes to technology tools available for the consumption of information, and is therefore an inherently political topic.

To set the table for my disagreement, let me agree that Mozilla is the gatekeeper of web standards.  When I'm writing browser-based code in JavaScript and need a reference, I'm looking at Mozilla Development Network's Web Docs (most of my JS projects, however, are server-side).  Mozilla has created tools and standards that have laid the foundation for the web.

First and foremost, the head of Mozilla, Mitchell Baker, is a Marxist who supports using the browser to block content that opposes her views.  How big of a lunatic is she?  Here are her words from her blog post "We need more than deplatforming":

There is no question that social media played a role in the siege and take-over of the US Capitol on January 6.

Since then there has been significant focus on the deplatforming of President Donald Trump. By all means the question of when to deplatform a head of state is a critical one, among many that must be addressed. When should platforms make these decisions? Is that decision-making power theirs alone?

But as reprehensible as the actions of Donald Trump are, the rampant use of the internet to foment violence and hate, and reinforce white supremacy is about more than any one personality. Donald Trump is certainly not the first politician to exploit the architecture of the internet in this way, and he won’t be the last. We need solutions that don’t start after untold damage has been done.

Additional precise and specific actions must also be taken:

Reveal who is paying for advertisements, how much they are paying and who is being targeted.

Commit to meaningful transparency of platform algorithms so we know how and what content is being amplified, to whom, and the associated impact.

Turn on by default the tools to amplify factual voices over disinformation.

Work with independent researchers to facilitate in-depth studies of the platforms’ impact on people and our societies, and what we can do to improve things.

These are actions the platforms can and should commit to today. The answer is not to do away with the internet, but to build a better one that can withstand and gird against these types of challenges. This is how we can begin to do that.

Remember, this is the organization that fired now-Brave CEO and godfather of the web, Brendan Eich, for supporting Prop-8.  These are not the people you want in charge.

Mozilla has done great work for a long time in advancing security and privacy principals, but with a lunatic like Mitchell Baker at the helm, it's quite conceivable that security and privacy will be compromised, and the browser will be used against us; she even suggests going after advertisers and doxxing in her post.

Ten years ago I'd smack myself for saying this, but nowadays we've seen the extent to which Marxists will go to fight against our liberty.  These are mentally deranged radicals.

One reason I've always been pretty good at picking winners and losers in business and tech is because I look at management decisions.  For example, one of Mozilla's strengths is its top-notch development team.  What does Mozilla do?  Slash the development team:

In 2018, the Mozilla Corporation said it had around 1,000 full-time employees worldwide. Mozilla previously laid off 70 employees in January. Several sources have told ZDNet that the recent layoffs accounted for nearly a quarter of the organization's workforce.

Main casualties of today's layoffs were the developers working on the company's experimental Servo browser engine and Mozilla's threat management security team. The latter is the security team that investigates security reports and performs incident response. The security team that fixes bugs in Mozilla products is still in place, according to sources and a Mozilla spokesperson.

One of Mozilla's most important contributions is the development of the Rust programming language.  Who was also affected by the layoffs?  The Rust team.  Remember, Mozilla is a tech company.  You sort of need developers.

These are not signs of a strong tech company with a long future.

After her layoffs, does Baker take a pay cut?  Of course not.  Like a good Marxist, she gets paid millions as Firefox hemorrhages users.

Another example of a failing company, look at Baker's plan to "change their pre-CCP virus model for post-CCP virus" (PDF).  It looks like it was cobbled together by a child who was locked in an attic with no windows during her developmental years.

Bookmarking?  Wow, amazing vision, except there's plenty of extensions and services available.  If I were teaching a web development course, creating a bookmarking extension would be a class project I'd assign.  The most iconic web company in our history, and bookmarking is going to help turn the ship around?

VPN?  Even as you're cutting security engineers?  Even if they had the infrastructure, that market is saturated.  This is clearly a person who has no idea what she's doing, and who's never had to build and run a company.  Why would you with Google money falling out of the sky and into your lap for years?

What does Baker blame for their nosedive?  The CCP virus.  That makes total sense, because clearly, with more people locked at home and forced to take advantage of online services, that somehow works against a web browser.

That's like saying your ice cream sales are falling because it's too hot.  Idiots.  It's something a San Francisco attorney tech CEO would say as she drives the company into the ground.

Why would you prefer a product that's completely dependent on the alternative with whom you're trying to compete?  What Mozilla has in engineering talent, they lack in leadership brains.

What does modern-day web innovation look like?  How about a browser-to-browser video calling service that's more secure than Zoom and other market leaders.  That's freakin' genius, and it's what a smart company does.  That product is free for one-to-one calls, and premium for multiple participants.  No applications or extensions required.

Brave has Tor built into the browser.  Ad blocking tech and privacy functionality is part of the browser and requires no extensions (and runs on Rust).  Brave is directly competing with Google's search engine instead of being dependent on them.

Brave pays you crypto for using their browser.  Thanks to the recent price surge, I have thousands of dollars' worth of BAT.  This is free money, and another reason why Brave is ahead of the pack.

Regarding Batsov's point on Firefox's, Brave used Gecko (Firefox's rendering engine) and ditched it for Chromium/Blink.

Gecko is a dying engine.  Chromium is open source, and the Brave developers strip out all the deep-state surveillance crap and soft-patch it to be privacy-first. 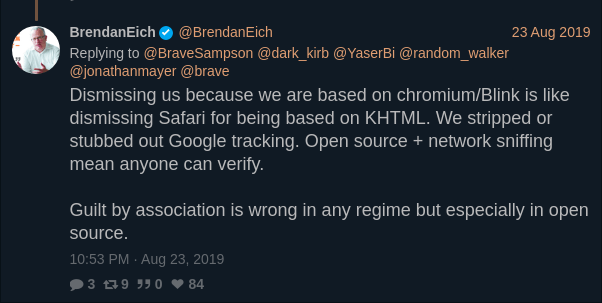 Would you rather have a dying engine with a dying company, or an innovative and growing company with the engineering chops to take advantage of an open-source browser engine that happens to be the most popular in the world?

Would it be nice for a non-Google-based product from which to build a browser?  Sure, but the evil is infinitely outweighed by the good, especially since the evil is a non-factor being open-source.

To suggest Firefox for the future and as the only alternative, especially over Brave, is laughable and shouldn't be taken seriously. 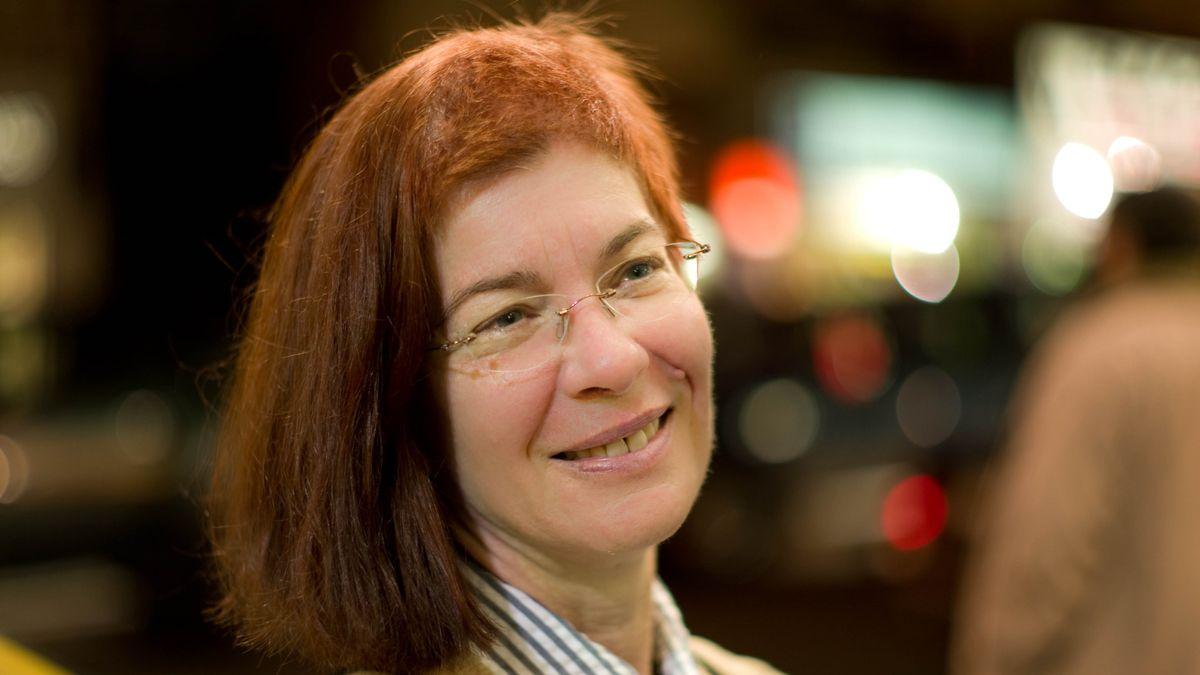