How times have changed.  Towards the end of the Bush administration, W. drove the economy into a steep recession by signing into law the Democrats’ minimum wage hikes, then handed it off to the Obama administration who promptly waged economic jihad on us small business owners.  Since President Trump took over he’s been fundamentally restoring our economy and the results have been nothing short of a miracle.

The Trump economy has added more than 1.6mm jobs than expected; that's quite a miss by "experts". 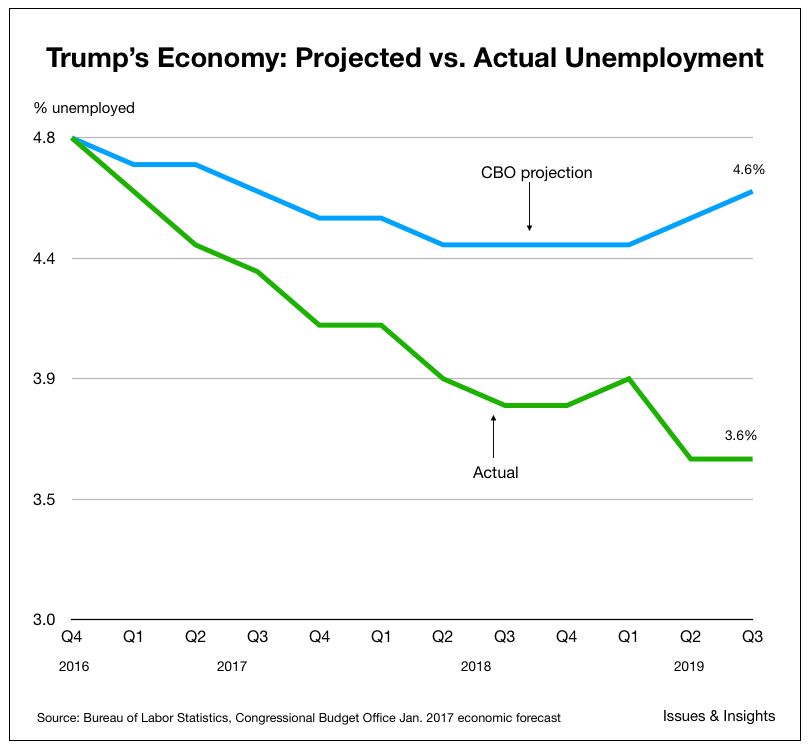 Trump waived a magic wand and now people are rejoining the workforce, which in theory should increase the unemployment rate.

Under Mr. Obama, that trend was clear and his supporters sought to explain it away with demographic changes. That was partially true. Baby-boom retirements assuredly contributed, but it wasn’t the full picture.

When labor force participation and the equally important but less-cited employment-population ratio rises, and yet unemployment continues to fall as people enter the labor force, it’s a far stronger labor market.

To Obama, it does seem like magic, but in reality people are jumping back into the labor pool because business is booming, driving up demand for workers.  This demand is so high that elderly and ex-felons are being pulled back into the workforce.  Another labor source are people leaving the welfare rolls.  If you can fog a mirror, you can get a job in the Trump economy.

There is no scenario where the labor demand we’re experiencing, along with the bone-dry labor force, signals a recession.

Ivanka Trump had an interview a few weeks ago with Steve Hilton where she highlighted a few points on manufacturing.  One interesting point that’s lost among the anti-business propagandists is we have 500,000 VACANT MANUFACTURING JOBS.  Another incredible stat is every month ~70% of new jobs are from workers not in the workforce.  This is amazing.

Because the demand for labor is high, and the available workforce is small, wages have been rising as businesses are forced to compete for labor.

For you college professors or Bernie supporters who don’t understand this basic concept, if you have a smaller available workforce, but you really need to hire a new employee with a particular skill, when someone becomes available you’re going to offer them more money to entice them to work for you.  However, someone else may offer more, forcing you to be more competitive, raising the value of that employee even more.

Wages are rising while the anti-business financial propagandists and Bernie Sanders tells you it's going down.  In fact, the low wage jobs are experiencing the strongest gains.  This is the free market at its best. 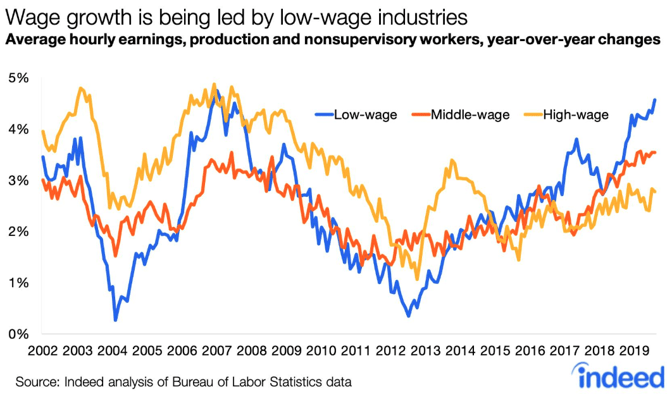 Sadly, this boom is not experienced by those with degrees of no value, like gender studies. These degrees were useful when digital media outlets were hiring writers for “orange man bad” articles, but as they continued to lay off staff, the only saving grace for these unskilled graduates loaded up with debt is Starbucks. Unfortunately for them, anyone can operate a latte machine.  Even Bernie Sanders can make a coffee.

Household income continues to increase while Bernie Sanders tells you it's going down.

“Real median household income—the amount earned by those in the very middle—hit $65,084 for the 12 months ending in July. That’s the highest level ever and a gain of $4,144, or 6.8%, since Mr. Trump took office.” @WSJ pic.twitter.com/Sna9DHbnyV

The draining the labor pool is great for the economy and those looking for employment, but it’s a real problem for many of us business owners.  During the Obama administration I could walk outside and throw a rock and hit someone available with the skills I needed.  Those days are gone, and it’s a reason why you see dips in some business confidence surveys.

“Although small business hiring dipped a bit in September, thanks to the lack of qualified workers, many owners are still committed to creating new jobs and raising compensation to attract and retain workers,” said NFIB’s President & CEO Juanita D. Duggan. “Owners want to create more jobs, but fewer did in September, because they can’t find workers to fill them.”

Fifty-seven percent of owners reported they are hiring or trying to hire. Of those owners, 88% reported finding few, if any, qualified applicants for the open positions.

Thirty-five percent of all owners reported job openings they could not fill in the current period, which is a historically high number. In construction, 56% had job openings, while 37% reported openings in manufacturing and 38% in retail.

Owners are continuing to raise compensation, with a seasonally adjusted net 29% of owners reporting raising worker compensation and net 18% of owners are planning to do so in the next three months.

“Hiring has slowed down, but it’s due to the inability to find qualified workers, not because of a lack of customers,” said NFIB’s Chief Economist Bill Dunkelberg. “The strong labor demand is a clear indication that small business owners are optimistic about prospects for the economy.”

The Obama regime left the country with a "brain drain", where college graduates can barely form complete sentences beyond "would you like medium or blonde roast?".  In the Ivanka Trump video above she talks about this problem and much needed jobs training initiatives.

How is the President doing this?  Does he have a magic wand that Obama thinks is required to create this boom for which he (Obama) takes credit?  No, he simply does what any business owner will tell you is the key to business growth: get government the hell out of the way.  President Trump continues to slash regulations, pushed for tax cuts, and abracadabra we’re in a boom.

Globally, the President is bringing business and investment back to the United States (more jobs) by pulling up the roots of the globalists that turned America into a consumer-economy with China as the manufacturing floor.  By utilizing tariffs to stop dumping and to begin the process of decoupling dependence, and establishing trade agreements with countries that compete with China, American companies are being liberated from the rule of the CCP and moving to surrounding Indo-Pacific partners or back to the United States.

This restructuring of global supply chains is long lasting because it requires massive investment to move production and years to reap a return.  President Trump has brilliantly opened an escape hatch for business to flee China under the guise of working out a trade deal; a deal we know China will never sign.  Once these businesses leave, they will never return.  With every passing day and for every business that leaves, the pressure exponentially increases on China.

How is China under pressure?  Unlike the United States, China can’t sustain itself and must import food, energy, and raw materials.  Their currency is as worthless as toilet paper and can’t be used to import goods.  Therefore China desperately needs USD to survive.  That’s fine when they were the world’s manufacturer, but as businesses flee (because of Trump’s pressure) those dollars are not flowing and must burn USD reserves to survive.  Trump has them in the biggest Chinese finger-trap in history where their own moves work against them.

As they burn USD, their currency devalues.  That’s fine for the United States because the goods we’re still importing from China are remaining cheap (low inflation).  This directly contradicts the perpetual propaganda from the financial news shows and anti-business pundits who desperately want you to believe that the tariffs on China are hurting American consumers.  It’s not even spin; it’s a straight-up lie gobbled up by an audience stupid enough to watch them.

While they burn their USD, the dollars coming in continue to dwindle because business continue to leave.  It’s so bad that China will not let the wealthy move their USD out of China.

Meanwhile, the United States continues to move forward with trade agreements to replace China.  It’s important to understand that we should not have drama to this degree with China.  China should be to the United States as your coffee vendor or telephone system is to your business.  If you must switch vendors it should be a mild nuisance.

Trump described the deal, dubbed the new U.S.–Japan Trade Agreement, as a huge victory for both countries, especially America’s farmers. The deal will grant U.S. growers significantly more access to the Japanese market.

Japan is the third-largest agricultural market for U.S. exporters, according to the Office of the U.S. Trade Representative (USTR). In 2018, the United States exported 13 billion dollars worth of farm products to Japan, including corn, beef and beef products, pork and pork products, soybeans, and wheat.

The White House says over 90 percent of United States agricultural imports into Japan will be duty-free or receive preferential tariff access.

Alongside the agriculture deal, the U.S.–Japan Digital Trade Agreement was also signed. There is 40 billion dollars worth of digital trade between both countries.

The deal was first announced at the August Group of 7 summit in Biarritz, France. At the U.N. gathering last month, the two countries signed an agreement-in-principle.

Japan is the fourth-largest U.S. trade partner after China, Canada, and Mexico. And in August, the country surpassed China as the largest foreign holder of U.S. government debt.

Japan was also the third-largest source of foreign direct investment in the United States in 2018.

This trade deal opens up access to Japan for our farmers, who despite the false narrative by the anti-business financial propagandists that farmers are ready to storm DC with pitchforks, have been strongly supporting Trump.  Great for the American farmers, great for Japan, and not good for China.

The President initiated and delicately led the exodus out of China.  It’s important not to rock the boat and businesses need time to set up shop elsewhere and migrate operations without upsetting China, and he’s been managing this spectacularly.  In the end I believe this entire ordeal will make a lot of businesses smarter because they’ll have more appreciation for contingency, and will make the United States economy more stable.  One lesson us businesses owners learn early is never leave your operations vulnerable by being dependent on a single vendor.

There’s a lot more to the intense pain of China being administered by President Trump, but the point for this article is President Trump has his boot on the neck of Xi and is breaking apart the globalist stronghold on the world’s economy.

Beyond China, there’s a few more shoes to drop that will further fundamentally restore the United States economy, like the USMCA to replace NAFTA, and post-BREXIT European trade agreements.  With China hurting, they’re importing less and that’s having an effect on the European economy.  The anti-business financial propagandists and Never-Trump clowns blame Trump, of course, but you can ignore their squealing.  Fact: the US economy continues to grow, is durable, and is stable.

One final thought, I believe President Trump will go for another round of tax cuts and payroll taxes.  I’m sure you can imagine how hot the 2020 election season will be six-months out; now think about President Trump proposing and pushing for Congress to pass tax cuts at his massive rallies smack-dab in the middle of the most intense election ever.  Imagine the pressure on the do-nothing Republicans and Democrats in red states being forced to deal with them.  Nobody knows how to apply pressure at the right places better than Trump, so I’m getting giddy thinking about this.

Our economy is the strongest and hottest in the world, global slowdown or not, giving us great leverage over China any other negotiations.

"No sign of a recession" no matter how much the never-Trumpers kick and scream.https://t.co/QHMU3xzM0i 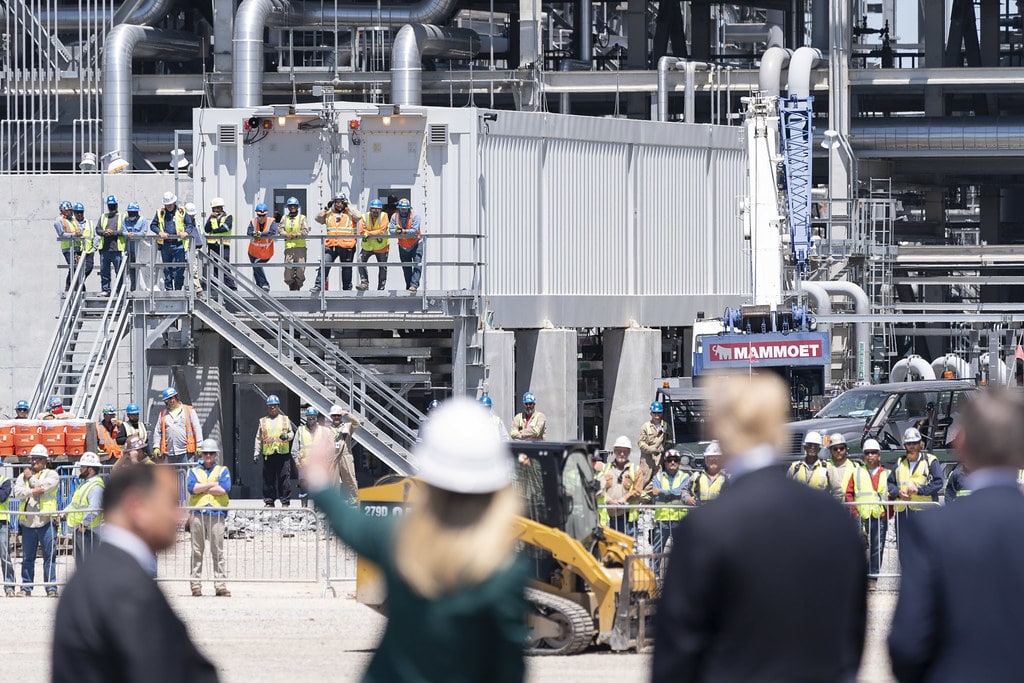