The G20 in Japan last week went as we anticipated.  Xi showed up, so President Trump showed some temporary mercy to Xi by agreeing to hold off the next round of tariffs to allow China the opportunity to resume negotiations.  He also agreed to allow some American companies to sell products to Huawei, giving the company a stay of execution.  Who says President Trump doesn’t have a heart?

I believe Trump's mercy to China is a break to American businesses packaged as diplomacy.  As always, I see the world through the prism of business, and I think Trump's move was to give companies leaving China who may be running behind a little more time, and to give the companies on the fence somewhat of a "last call".

I can imagine how often Trump has been hearing "Mr. President, we need another month or two; we're almost out of China but we need a little more time!".  Yes, this is 4-D chess, where Trump makes it about China, but the priority was to make sure American businesses have the softest landing as possible, so he uses Xi's concessions to give American businesses more time under the guise of "time for negotiations".  Once Trump hears the businesses are out, and those staying have made their decision clear, he'll continue with the next round of tariffs.

At the G20, President Trump gave up literally nothing, despite what stories the fake news push.  The reality is China crawls back to the negotiating table with the precondition of the abandoned deal as the starting point (the one China walked away from) with no reduction of tariffs.  Initially I was surprised that China caved and agreed to continue where they left off, but yesterday I saw this news item about China’s statement on negotiations:

Existing U.S. tariffs will have to be removed if there is to be a trade deal between Beijing and Washington, China's commerce ministry said on Thursday.

This gives President Trump the green light to pull the trigger on the next round of tariffs once he's confident the businesses fleeing China are safe and in a good position.

China appears to have attempted to make a play before the G20 with Xi taking a trip to North Korea to meet with Chairman Kim.  Shortly after that meeting, President Trump delivered a letter to Kim.  At the G20, before President Trump met with Xi, he made this tweet to Kim:

After some very important meetings, including my meeting with President Xi of China, I will be leaving Japan for South Korea (with President Moon). While there, if Chairman Kim of North Korea sees this, I would meet him at the Border/DMZ just to shake his hand and say Hello(?)!

It seems Xi intended to bring North Korea to the G20 as leverage, but Trump publicly neutralized it.  This was the scene immediately after the G20, when President Trump made history by stepping into North Korea: 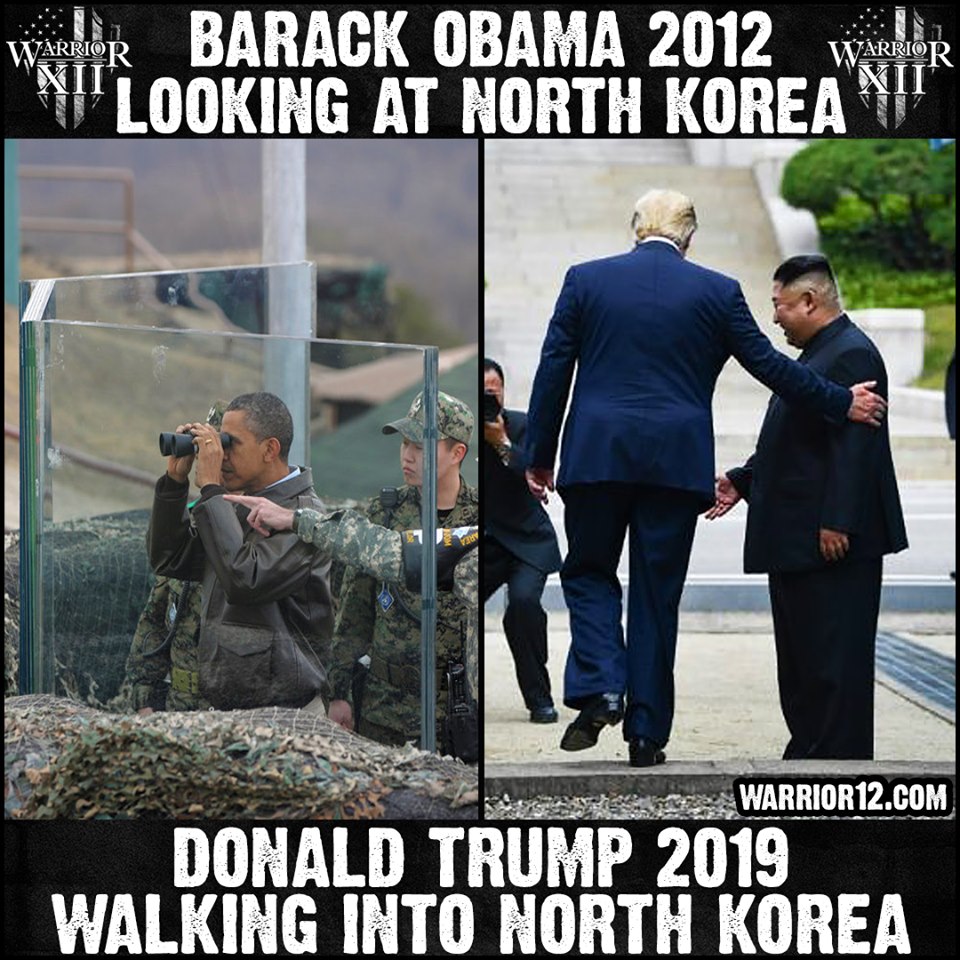 Xi's position of “I’m letting go of North Korea for you” changed to President Trump saying “I’m already meeting with Kim after I leave here, but thanks anyway for the offer”.  The leverage value of North Korea went from something to nothing because Trump "assumed the sale".

I had a great meeting with President Xi of China yesterday, far better than expected. I agreed not to increase the already existing Tariffs that we charge China while we continue to negotiate. China has agreed that, during the negotiation, they will begin purchasing large.....

Luckily for Xi, he made a massive soybean purchase and did show up to the G20 as commanded by President Trump.  Xi waited patiently for a meeting as Trump met with his (Xi's) competitors first, in front of Xi, and after Trump took North Korea out of play he agreed to not drench China with more tariffs.  Trump and the team knows the hardliners in China won't concede, so this is only temporary.  For every day that passes, more deals move closer to finalization and more businesses leave China.  Time is not a friend of Beijing.

Another aspect of Trump letting China gasp for a little more air, along with giving American business more time to leave China, is the allowance of American companies to sell to Huawei.  The anti-Trump fake news propagandists are pushing the narrative that weak Trump caved, which is beyond ridiculous.

President Donald Trump’s decision to allow expanded sales of US technology supplies to Chinese telecommunications giant Huawei will only apply to products widely available around the world, and leave the most sensitive equipment off limits, a top White House aide said on Sunday.

“All that is going to happen is Commerce will grant some additional licenses where there is a general availability” of the parts the company needs, National Economic Council chairman Larry Kudlow said on “Fox News Sunday.”

US microchip firms in particular “are selling products that are widely available from other countries … This not a general amnesty … The national security concerns will remain paramount,” he said.

President Trump is keeping the current tariffs in place, is not budging at all on national security, and has not given concessions on anything in the deal with IP theft, etc.  Again, Trump gave up nothing to China, except to let them breath.

China's strategy to pressure Trump from within the United States has not been very effective.  For example, China has been targeting our farmers.  The result has been a 74% approval rating of Trump by farmers.  Chinese operatives like Congressman Justin Amash have publicly pushed for the impeachment of Trump; yesterday Amash was kicked out of the GOP.  China's spokesperson and presidential hopeful Joe Biden has had a rough week on the campaign trail.  China has made no political inroads to pressure Trump, and his support holds firm.

There's no good news out of Beijing.  They are dealing with massive protests in Hong Kong; they have a devastating disease running rampant through their pig population; businesses are fleeing; banking stability is shaking.  Meanwhile, the United States economy continues to be red-hot.

It wasn't all business at the G20.  International court jester Justin Trudeau provided some great comedy.

On a side note, I feel sorry for the Canadians jailed in China.  Imagine you're a family member of one of the captives while watching Trudeau behave like a clown at the G20.  He doesn't have the respect of China to negotiate a release, nor does Trudeau have any friends, and China knows it.  Even though China says the United States can't help, President Trump could have those jailed Canadians on a plane in thirty minutes.

It was a great G20 for the United States.  Trump walked away with more than when he arrived, got face-time with our trade partners and allies, bought some time for American businesses, and China left Japan with less.  This interview with Peter Navarro gives a good rundown on where we're at with China:

I can't wait to see President Trump's next move.