The G7 is in France, and if this past week is any indicator, President Trump is coming to collect the head of Angela Merkel and to help Prime Minister Johnson drive a sword through the heart of the European Union.

So far, PM Johnson seems determined to leave the EU:

To set the backstory, President Trump has set fire to the globalists’ stronghold of China, and now he’s coming for the brain center in the European Union.  He’s going to walk into a room where the world leaders will be sitting around a huge table, anticipating his arrival.  He’ll reach into a bag, pull out the head of President Xi and roll it onto the middle of the table.  I anticipate Merkel to start shaking and Macron to surrender.

The vibe will be different this time around.  The Russia hoax is dead, with three of the participant countries complicit in the coup attempt (Australia, UK, and Italy).  The United States economy is red hot, even during a global slowdown.  Trump rally crowds are massive, intense, and his overflow crowds standing outside in the rain watching him on the big screen dwarfs any Democrat candidate’s.  There’s little doubt as to how much the American people support him even with the daily anti-Trump fake-news media pushing lies day and night.

With his tremendous support from Americans and his proven actions with China, his political capital is limitless.  The participants at the G7 know he can make any decision he wants with no political consequences back home.  He has no handlers whom to report and await further instruction.

On Friday, President Trump set the tone for the G7 by telling American businesses to leave China (which we thought was the desired outcome):

....better off without them. The vast amounts of money made and stolen by China from the United States, year after year, for decades, will and must STOP. Our great American companies are hereby ordered to immediately start looking for an alternative to China, including bringing..

He then cranked up the previously postponed round of tariffs, and another round for September:

...Additionally, the remaining 300 BILLION DOLLARS of goods and products from China, that was being taxed from September 1st at 10%, will now be taxed at 15%. Thank you for your attention to this matter!

This is what we figured would happen:

I believe Trump's mercy to China is a break to American businesses packaged as diplomacy.  As always, I see the world through the prism of business, and I think Trump's move was to give companies leaving China who may be running behind a little more time, and to give the companies on the fence somewhat of a "last call".

I can imagine how often Trump has been hearing "Mr. President, we need another month or two; we're almost out of China but we need a little more time!".  Yes, this is 4-D chess, where Trump makes it about China, but the priority was to make sure American businesses have the softest landing as possible, so he uses Xi's concessions to give American businesses more time under the guise of "time for negotiations".  Once Trump hears the businesses are out, and those staying have made their decision clear, he'll continue with the next round of tariffs.

To take stock of the G7, who’s going to be there?  Boris Johnson, the new pro-BREXIT Prime Minister; the President’s closest friend of all the world leaders, President Abe of Japan; Scott Morrison of Australia, who wants free trade, is an ally of the United States, and appears to have Australia’s interest at heart; Narenda Modi of India is going to be a major benefactor of the great China exodus; Italian Prime Minister Giuseppe Conte will attend, but he recently resigned and will be out of office soon, but Deputy PM Matteo Salvini, is in the mold of Trump in terms of making Italy great again.

These are five strategic trade partners and allies who are part of restructuring the global supply chain, and will be the first time the United States is entering friendly pro-trade territory at the G7.  At the kid's table will be Emmanuel Macron of France and Angela Merkel of Germany.  European Union side-leech Donald Tusk will be there as well, gobbling up as many free hors d'oeuvres as he can.

Macron is inconsequential.  He’ll do what Merkel tells him to do, and the yellow vest protests sure gives the impression that he doesn’t have the support of the French people.  At the G7 he’ll do what the French do well: host and service guests.  That leaves Merkel, who like any globalist plant has no clue how to run a country.

Thinking from a business perspective, what’s the most important thing to Germany that's ripe for leveraging?  Their massive auto industry.  I'd think the first thing Trump would do after leaving the G7 is to hit German imports with painful tariffs.  That puts Germany in a bad position and will need to take action to stop the bleeding.  What would that force Germany to do?

One thing they absolutely will not do is eat the tariffs like China.  From Germany’s perspective, this is an economy killer, and the pressure on Merkel will be intense from their auto companies and intertwined politicians.

I believe President Trump will give Germany two paths to stop the pain: through Canada/Mexico or Britain.  After his last meeting with Nancy Pelosi, Justin Trudeau stalled the Canadian side of the USMCA deal.  I think Trump will jack up tariffs and tell Germany that automobiles can come to the US, duty-free (Canada or Mexico) under a finalized USMCA deal.  This will apply immense pressure on Trudeau and Freeland to get their side of the deal done.

Using the German auto industry to kill the USMCA bird, that stone will ricochet and hit the EU bird.  As committed as Boris Johnson is to BREXIT, pulling Britain from the EU will continue to be a fight and take time.

I believe Trump will jack up tariffs on European products, but reduce the tariffs if they flow through Britain after a deal is done between Johnson and Trump.  This would completely undercut the EU, allowing it to shrivel up and eventually die on its own.

President Trump may give Frau Merkel a timeline to force Europe to move on other items, like taking back ISIS combatants, or as Germany and France refer to them, "citizens".  "If they don't take them back immediately, the tariffs start now, otherwise, they have a few months", etc.

As the G20 was a start to get us to where we are now with China, the G7 is the same for BREXIT and to ensure the finalization of the USMCA deal.  The globalists will be cast aside for true, global free trade among countries who respect one another.

On a side note, don't be surprised if Trump leaves France with a real shot at Greenland in his pocket.  Germany is Denmark's largest customer by far, with the UK third, and the US fifth, and they run a massive (for them) trade deficit with Germany.  Germany is very important to Denmark, and if Trump disrupts Germany's economy, Denmark will feel it. 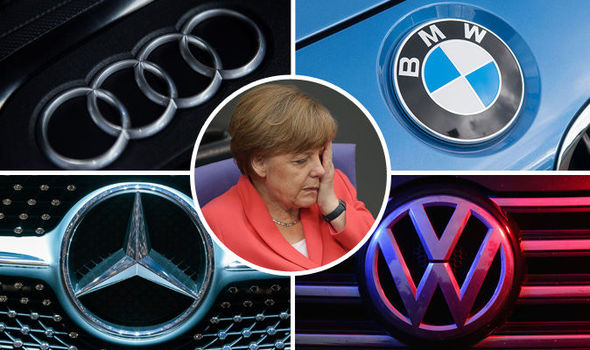