After the hearing, Senator Graham said he’s putting up the vote to move out of committee on Friday.  Good.  Let's get her into that black robe as soon as possible.

At this point, it seems the Democrats are not going to attack her personally, at least not as bad as Kavanaugh.  However, there’s still time, as I recall they didn’t begin to slander Kavanaugh until later, so it’s still a possibility.

The Democrats up to now appear to be trying to use Barrett against the President.  They intend use Barrett’s straight-forward and judicially by-the-book answers as proof that she’ll turn into a dicator Queen and kill pre-existing conditions in health care policy.

Full disclosure, I’m against mandating coverage for pre-existing conditions.  It’s up to an insurance company if they wish to service such patients.  However, the President has been so incredible for our country that this is the first time in my adult life that I would support the President’s agenda for something with which I disagree.

To the Democrats’ dismay, Judge Barrett didn’t give them any indication on her views of the ACA scam.  Knowing she’d adhere to the Constitution, we know she’d toss it like a used Kleenex.  The President will put forth a blueprint for Congress to bring forth a new health care plan.

Barrett will adhere to the rule of law, regardless of her personal opinions.  This is what separates her from the three activists currently on the bench.  Here, she scored some points against leftists on their disdain for her having a large family:

How dumb are Democrat Senators?  Allow Senator Klobuchar to demonstrate:

Still not convinced?  Here's Cory Booker, a Senator who has so much admiration for the confirmation process that he's using it to bounce lies about the President off Judge Barrett:

Can you believe this guy is a Senator?  On to the next moron.  One question I think the American people had about Barrett was is if this mother of seven with a career as a judge sneaks out of the house late for some midnight raping; the genius senator from Hawaii gets her on record:

The Judge slaps her intelligence on the table:

Barrett explains the difference between Legislatures and Justices:

These highlights show Barrett is more than qualified, and shows the Democrats refuse to take the confirmation process seriously, hence why Graham is moving it forward.  The timing for her to be sworn in could not be more perfect. 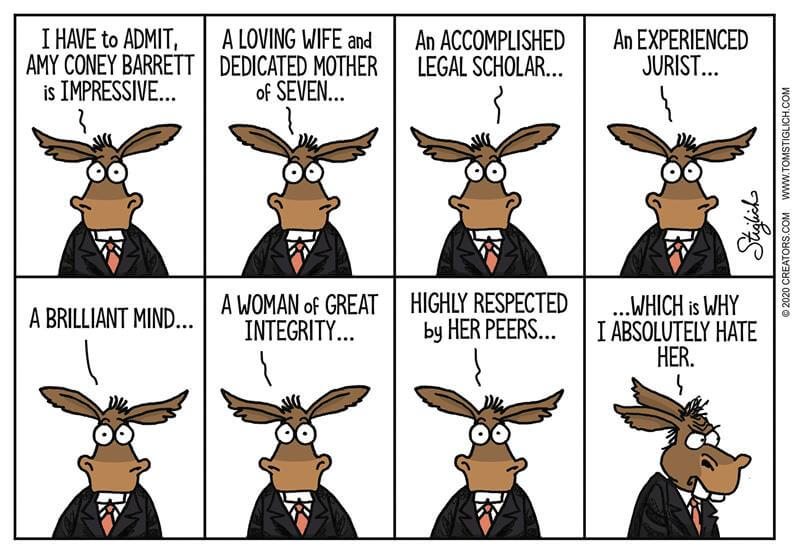