Picking Judge Barrett to fill Justice Ginsberg’s seat was a direct hit on the Marxist movement, deep-state, and Democrat party.  So far, her nomination seems to be well received by Republicans, and she had an excellent introduction on Saturday in the Rose Garden.

Barrett is forty-eight years old, which means she'll have thirty-plus years on the bench.  She believes life begins at conception, is strong on the Second Amendment (dissent on Kanter v. Barr), and signals strong on immigration, and she'll be a final nail in the coffin of the global warming hoax as she'll likely smack down communist EPA statues:

That view, shared by several of her future conservative colleagues on the high court, could make it challenging for a Joe Biden administration to push the bounds on tackling climate change through the federal agencies without new legislation from Congress.

Barrett “would not represent the majority of voters who believe climate change is real and want to see action,” said Gene Karpinski, the president of the League of Conservation Voters. “Barrett has made clear her disdain for federal agencies and the public protections they issue, which puts our ability to tackle climate change directly in her crosshairs.”

Barrett, 48, could be more likely to uphold Trump administration rollbacks of Obama-era climate change regulations, which have taken a more limited view of the EPA’s ability to control greenhouse gas emissions from power plants, passenger cars, and oil and gas operations.

That is music to my ears and will continue to be a boost to the economy while draining away the lifeblood of the Marxist movement.  From what I've read on her writings, rulings, and philosophy, I think us conservatives are going to be happy with her:

Barrett may have clerked for Scalia, but is she an originalist? Last year, she spoke about her judicial philosophy at the Washington, D.C., branch of my alma mater, Hillsdale College. She rebuked the notion of a “living Constitution,” arguing that the judge’s role is not to twist the text of the Constitution to fit his or her policy prescriptions but rather to interpret the law faithfully.

“If the judge is willing not to apply the law but to decide cases in a line, in accordance with personal preference rather than the law, then she’s not actually functioning as a judge at all. She’s functioning as a policymaker,” Barrett explained.

“And I would have had no interest in the job if the job was about policymaking and about making policy decisions,” the judge said. “My interest is in contributing to our tradition of judges upholding the rule of law.”

Some who don't like Barrett have tried to make the case that she'll be weak, attempting to use her decision in Illinois Republican Party v. Pritzker regarding the Illinois Governor's COVID lock-down order.  Shipwreckedcrew at RedState DESTROYED that argument and proved Barrett ruled correctly (spoiler: the IL GOP sent unprepared children with literally no argument to challenge the Governor; Barrett joined a 3-0 decision against the IL GOP with another Trump-appointed judge).

The President absolutely nailed it with her nomination.  With Thomas, Alito, Gorsuch, Kavanaugh, and finally Barrett (and Roberts, depending on what side of the bed he wakes up), the United States Republic is sitting pretty.  I believe this was the next major shift towards liberty since Trump was elected.  Gorsuch replaced Scalia, so we didn't gain; Kavanaugh replaced Kennedy, which gave us a half-gain, as Kennedy wasn't always a lock with the radicals.  Therefore, Barrett replacing Ginsberg is our first true gain in the Supreme Court.

Politically, the timing is perfect.  Blue check-marks on Twitter and the mockingbird media will not be able to help themselves in slandering Barrett, fueling voters with fresh anger towards Democrats as they head into the voting booth.  Democrats are in a checkmate; if they don't attack Barrett, they don't raise money from their radical base and they lose; if they do attack her, they raise money and suffer greater losses.

The country has a strong recollection of what the Democrats and media did to Brett Kavanaugh during his confirmation hearings, and it will never be forgotten.  After watching the desperation of Democrats since his confirmation, from AntiFa-BLM, to the lock-downs, to their baseless impeachment of the President, the public will be hyper-sensitive to every word muttered about Barrett.

Even statements and accusations far less brutal than what was launched gainst Kavanaugh will be amplified in the minds of the public.  Her children, of course, will be fair game for media scum, while Joe Biden’s young children like Hunter will continue to be off limits.

It’s not like Barrett didn’t watch the Kavanaugh hearings, or doesn’t know how insane the radical leftists are.  Kavanaugh couldn't anticipate the degree of attacks at him, but Barrett does and is prepared.  She confidently made the trip with her husband and children to the White House and introduced them to the country.

The mockingbird media is already doing back-flips over her children, especially the two kids she adopted from Haiti.  Barrett will be accused of illegal adoption, and slandered with accusations of using them as props.  I supposed she should have left the two black kids at home and just brought the white ones; that would have satisfied them I’m sure.  Attacks on her ability to raise children and do her job are in flight, as if she hasn't had a job for the past twenty years.

While it will be sad for the children to be targeted, the entire country will be red-pilled on human trafficking crimes because of the Clintons' activities in Haiti.  This “conspiracy theory” will be a household topic of discussion, like Epstein and Maxwell, Q-Anon, and George Soros.  Democrats and media, PLEASE bring up Haiti!

The confirmation is a done deal, and will consolidate the Republicans.  Even without the loser clown trio of Romney, Collins, and Murkowski, we have the votes.  For Republican senators who believe they’re in competitive races, this will give them a boost and force their opponents to run against an incredible nominee.  I also believe we'll flip a Democrat senator.

The best, of course, is we’ll flip a seat held by a radical leftist who supports baby-killing and despised the Second Amendment to someone who thinks killing babies isn’t cool and will protect our right to bear arms.  Ginsberg couldn’t care less about the Constitution; a Justice Barrett will hold it sacred.

Barrett will be another move towards restoring our Republic and bringing sanity back to our society.  I'm sure she’ll have some rulings that we won’t like over the next few decades, but most of them we will, and will be paramount for our country.  We’re about to have a strong 5-4 court.

Senator Graham set October 12th for Barrett to be questioned before the Senate Judiciary Committee.  Then it's off to the Senate confirmation hearings where I predict a 54-46 confirmation.  The timing is perfect, and Barrett will be sworn in right in time for nine justices to rule on whatever coup attempt the Democrats had in mind.  She has such experience:

After a brief time in private practice, during which she was on  the team representing George W. Bush in Bush v. Gore following the 2000 presidential election, and teaching law at George Washington University and the University of Virginia, Barrett headed in 2002 to her alma mater, Notre Dame Law School, where she would teach for the next 15 years.

President Trump has completely re-made the judiciary, and has now made the Constitution great again in the Supreme Court.  Bonus point: look at the picture of her family below; does this look like someone who'll put up with coups and AntiFa-BLM domestic terrorism? 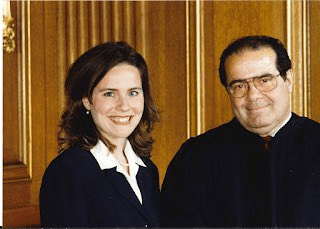 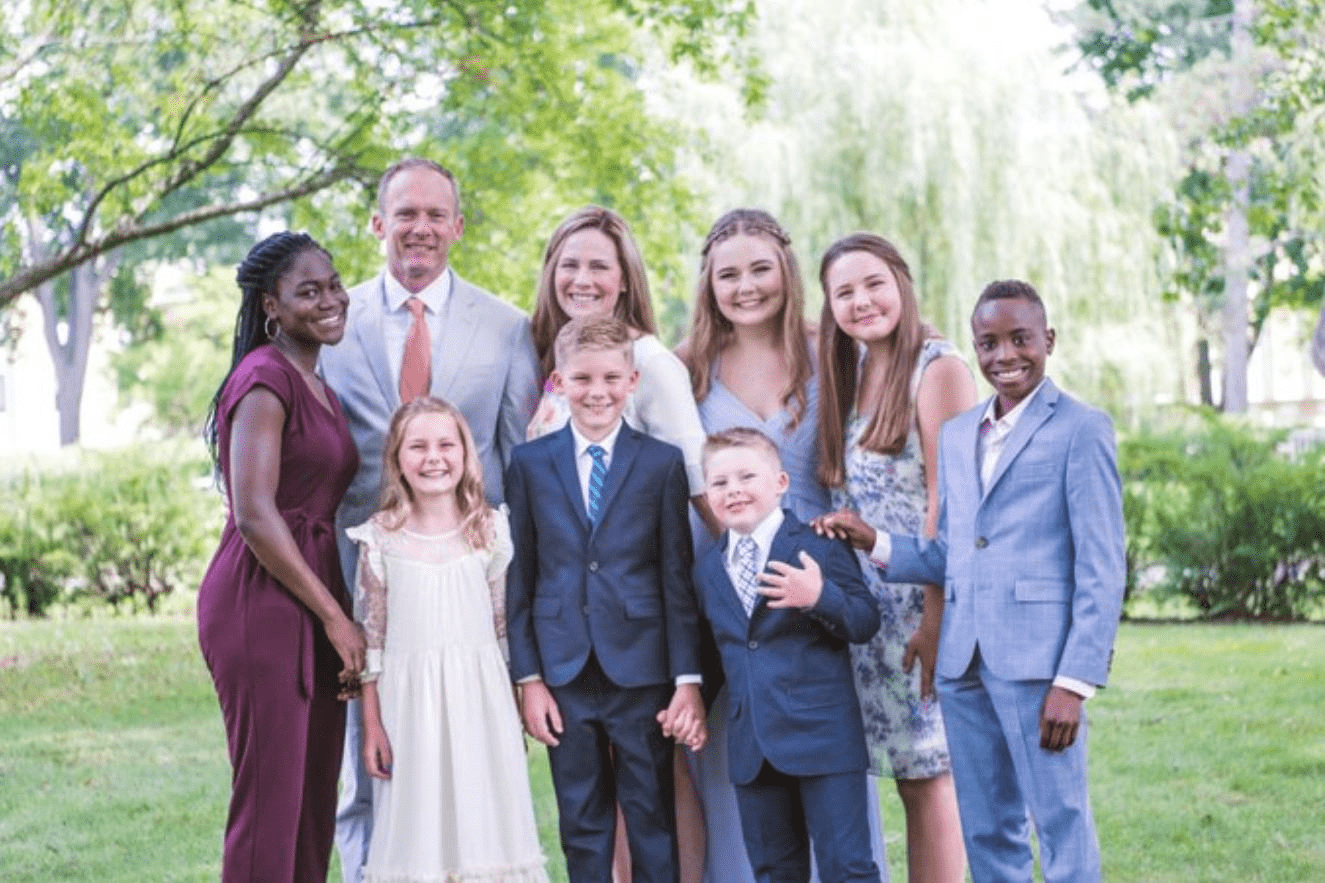