“What are YOU prepared to do?”

Free will is the sine qua non of modern, enlightened, democratic society. It is a natural gift, one bestowed on the first humans as told in Genesis. Free will is the progenitor of every accomplishment of mankind; it is also the inevitable seed of sin and degradation. It is perhaps the most consequential gift from God to man, save the gift of redemption through Christ. Even the gift of redemption itself hinges on the exercise of God-given free will; failing to actively accept that gift results in damnation.

It is no surprise that the darkest forces of this world target free will among men nearly as often as they target Christianity itself. The most powerful of those dark forces, as always, work through the guise of governments supposedly constructed to benefit mankind. But it is the universal bent of governments – and a depressing proportion of the people who gravitate to government service – to consolidate and increase their own powers, not those of any other entity, including most particularly those of the men they govern.

To paraphrase George Washington, government is neither reason nor eloquence; government is force. While government may sometimes attract the altruistic or service-dedicated among us, government has always served as the perfect channel for others who have the lowest of intentions.

The current battleground in America is a cultural one, largely centered on the exercise of personal free will, the very essence of freedom. Government and its allies in the media and Big Tech and academia wage an endless onslaught against every symbol of innate virtue and personal liberty in our society. It is perfectly natural that these forces of degradation and destruction should focus on the iconic American man as an enemy who must be swept aside and conquered absolutely.

Two parallel facts stand juxtaposed in recent events. The vast majority of statues erected in public spaces over the history of the US have depicted white men. And almost without exception, all the statues pulled down, demolished, destroyed, dismantled, and removed by angry mobs of Leftists or politicians afraid of (or in agreement with) Leftists over the past few years have been statues of white men.

Statues were selected as targets because they are public, visible reminders that, in fact, most of the great achievements in American history have been (and continue to be) accomplished by individual white men. The frantic, restless American Left cannot survive if that truth is permitted to stand.

The ridiculous phrase “toxic masculinity” so in fashion these days is a construct of the Left designed to enclose white American men in a sort of barbed wire enclosure where they can be observed and stoned or otherwise tortured at will by the correctly-minded. A quick cull of the ranks of the “woke” will yield a proud battalion of yapping harpies who are happy to testify that, in fact, all masculinity is inherently toxic, and so all men (excepting men of color, of course) belong behind the wire.

It’s not a secret that at one point in time in America, people of color, especially black people, were victims of racial, educational, financial, and social bigotry and discrimination. That period of our history ended a very long time ago. But those who make their livings flogging dead horses such as the bygone suppression of negroes have managed to create a new environment of discrimination. Today, the white American male, especially if he happens to be a Christian, finds himself constantly on the receiving end of the traditional ration of hatred: racial, educational, financial, and social bigotry and discrimination.

The targets of the bigotry and discrimination have changed, but the source has not. In every instance, it is the political Left. These days we call political Leftists “Democrats.” 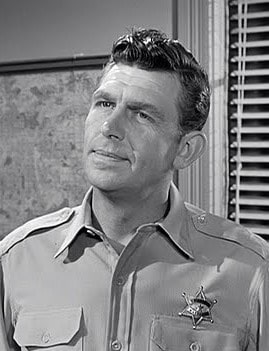 The transition is clearly visible in American media, particularly in our television programming. Many can remember when Andy Taylor could solve just about every problem in Mayberry. We recall when father knew best, except when he didn’t. Ward Cleaver knew better than to leave it to Beaver. Matt Dillon ran the show in Dodge City, Wyatt Earp chalked the line in a succession of dusty towns, and all the ills of all the settlers traveling west were laid before Ward Bond or John McIntire in the role of wagon-master. 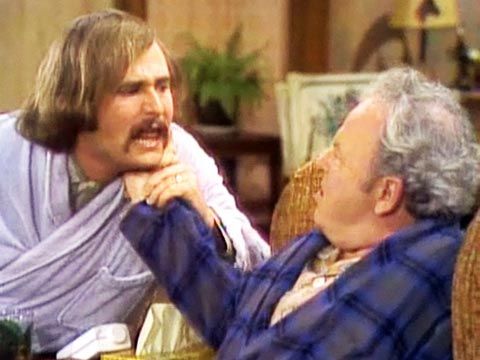 The post-hippie era spawned anti-patriarch programming. All In The Family showed us an archetypal blue-collar American man who was not only out of control of his own household, but constantly belittled and bested by his bosses, by his friends, by his airhead wife, and especially by his freeloading radical Leftist son-in-law. M*A*S*H treated us to comic-opera commanders of a war-zone surgical hospital being completely overrun by insubordinate medical staff and ultimately controlled by a small, quiet, pudgy corporal called “Radar.”

This stuff did not define the culture. Rather, it reflected what was going on at the time. Television programming is seldom a leader, but almost always a follower. All In The Family didn’t rocket to the top of the ratings because it portrayed anything new. Rather, it portrayed a lot that was old, perhaps a bit timeworn, but outdated and due for retirement in the minds of the militant Left.

The cultural revolution continued in the field of TV programming through the ensuing decades. Today we have a plethora of programming in which same-sex couples are the norm, law enforcement personnel are routinely portrayed as villains, “anti-heroes” have become the heroes, children are essentially in charge of every household, drug abuse is treated as an everyday condition and even a source of income, and Christianity is universally panned.

It’s not as though My Three Sons disappeared or moved away. Today those boys are mocked as figments of an older generation’s imagination. The new version of My Three Sons would have Robbie in charge of a brothel staffed by Hispanic illegals, Mike dealing heroin and fentanyl, and Chip as the compromised cop trying to bring them to justice. The original series was one of the first to depict the father figure as not knowing what the hell was going on in his own family.

The state of the “union”

The objective of that discrimination, that hatred, that endless downward pressure, is to rob the American man of his free will. The Leftist mob wants him to succumb, to subject himself to its rule. Led by delicate, effete, accidentally rich and powerful soy-boys (Bill Gates, Mark Zuckerberg, Jack Dorsey, Justin Trudeau, Pete Buttigieg, etc.) and angry women, homosexuals, transgenders, and other freaks, the current Left in America is united on almost nothing except its feral hatred of the traditional American man.

Not since the days of Bull Connor, George Wallace, Orval Faubus, Lyndon Johnson, Robert Byrd, and other Democrat stalwarts of the Jim Crow era has any class of American citizens been so segregated, so set apart and hated for being what they are. It may seem poetic, but it’s more likely inevitable that Democrats are again at the forefront of discrimination. It is what they did, it is what they do, and it is what they have always done.

The absence of strong men is at the root of almost every social (cultural) ill we can name in the United States. The usurpation of that leadership role by weaker sorts, while celebrated in the media and academia and Hollywood, is the crucible in which today’s social ills are fired.

No other example illustrates this failure better than that of the black American family.

Beginning with a Democrat’s vision of a “Great Society,” the US set out in the latter 1960’s to essentially replace the function of the poor American father with the government, a sort of Uncle Sam “sugar daddy” that would ease the loss of the man who quite literally came and went. It was vehemently denied at the time, but history has proven that these programs were aimed almost exclusively at black families, and they intended to replace the obvious and tradition-borne need for a black father with a welfare check from the government.

Either way, the fact is that the black American father, especially in the cities, was quickly replaced by a government subsidy, along with some food stamps and WIC. He was literally robbed of his reason to be home.

The fact of the matter

Such a dark picture I have painted! What a miserable outlook! What is to become of us?

No part of Andy Taylor or Matt Dillon or Steve Douglas has gone away. Ward Cleaver and Pa Walton and Sergeant Saunders still run the show. We are constantly told by the Left that it isn’t so. But it is so. We are saturated with sloppy tales of this child revolution and that girl takeover. But not one thing has changed.

Perhaps you’re not into God. In that case, we need to understand that, since the beginning of human history, and up to the current day, powerful men have always done the magnificent things.

If there’s one lesson we can hold dear, it’s that committees accomplish nothing. No useful thing was ever birthed by a committee, and no committee was ever formed that could stand up to the will of a determined man.

Rather, we should stand up to our duty as men. We have a role no other creature can fill. It is our correct destiny to define and fulfill that role. We are men; we should behave as men.

American society is literally waiting for us to hike up our britches and get busy. We have never been so sorely needed as we are right now. Our cultural role is dying in front of our eyes – and taking our political life with it – because men are not being the men they’re made to be.

The Left wants to rob American men of their free will. There’s really no argument on that point, and there’s no other way to put it. If the political Left has its way, American men – especially the men of old – are to be replaced by ladies and soft fellows and occasionally children.

As true American men, as patriots, we need to recognize our rightful place in the world. We need to realize that our brand of innovation accounts for every flavor of progress. We need to understand fully that every sort of human advancement has been based on something individual men have invented or developed.

Now it’s time to live up to that trust. As the advertising gurus for Firestone advised us 60 years ago, there comes a time when the rubber meets the road.

The power has always resided in us. We’re there now. We have reached the point where the question is exactly as Connery put it to Costner in The Untouchables:

What are YOU prepared to do? 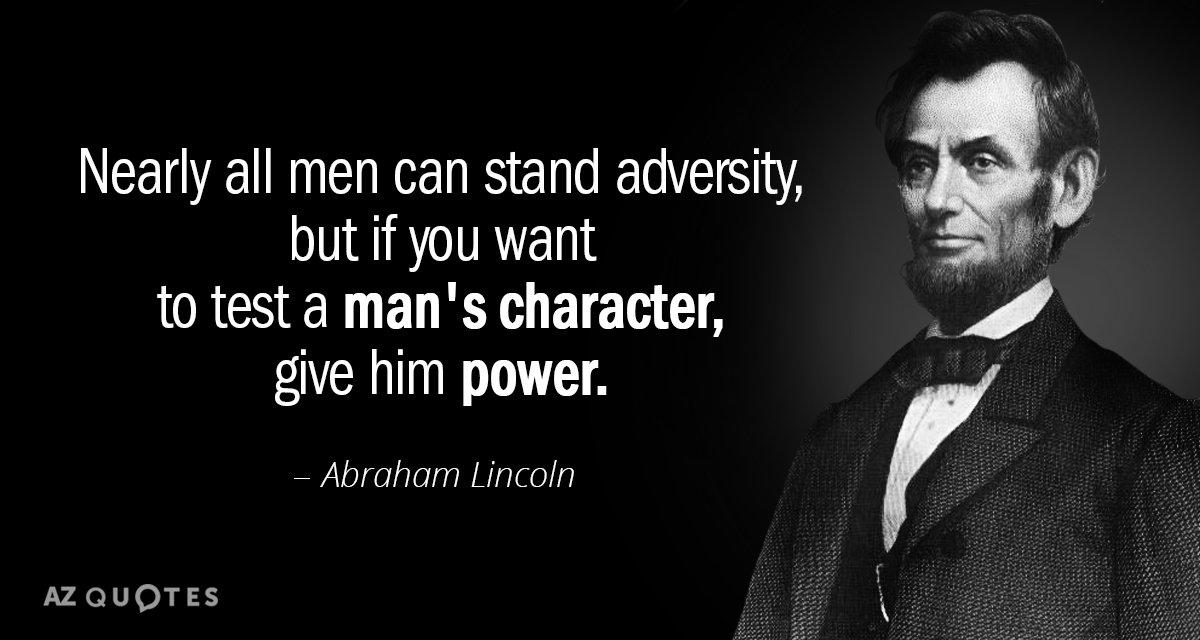