I’ve been thinking this would be the case, but it’s obvious now after the domestic terrorists tried to block entrance into the Tulsa Trump rally.  They’re looking to intimidate us.

Back in November of 2008, as Hussein was usurping the presidency, polling places were experiencing voter intimidation from the New Black Panther group (spoiler alert: they were pro-Hussein).  The famous case was the weakling dressed in all black and dreads, smacking a baton against his hand as people entered the polling station.

Even with CNN’s spin in that clip years later of that being a dominate Democrat area, a pre-TDS Megyn Kelly actually had one of her greatest smack-downs over the incident when she destroyed Kirsten Powers:

Anyway, smash cut to a post-Fentanyl Floyd AntiFa clown world where lunatics are blocking people from entering the Trump rally:

Overhead view of Tulsa Trump rally entrance that has now been overtaken by BLM protesters pic.twitter.com/5cnT5UjWPY

Intimidation will be their play on election day.  It won’t work in the red areas, but it could work in more populated swing areas if executed.  One may ask, “what about Biden’s voters?”.  I know, that sounds funny, but the answer is they know Biden will lose regardless, so at least suppress the vote for the President. 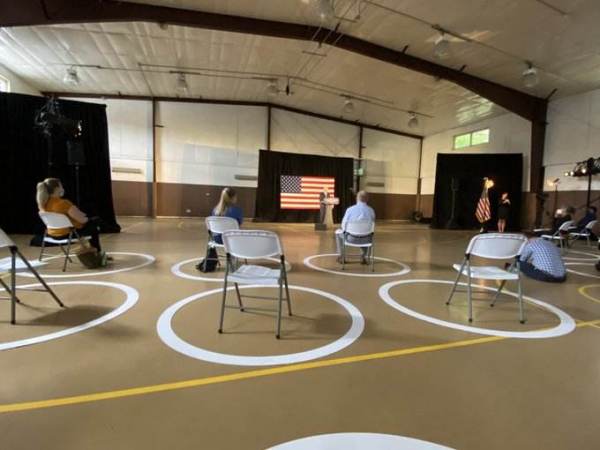 Vacant seats in the venue at the rally tonight proved their intimidation somewhat effective, as the story from tonight isn’t the flood of criminals into the zone of the rally, it’s “Trump is losing support!”, which is totally ridiculous.

Honestly, if it were me at the Tulsa rally, and these lunatics showed up and started causing trouble, and local law enforcement was allowing it to happen, I probably would have left as well.  I’d love to hang out at a Trump rally, but I’m not getting myself into a situation where I kill someone and end up in prison, or someone kills me.  I’m not willing to die on that particular hill.

One bit of advice, if you do go to any of these libtard hot-spots, always carry earplugs on your person.  They’ll get in your face with a bullhorn, which will essentially force you to punch them square in the face, which they want.  Make sure your ears are well plugged, maybe wear some protective gear for your eyes for any flying obstacles, and you should be fine.

I don’t think this will happen on election day, but as of now, this is their plan, no question.  They showed their hand, so Trump will be able to smack it down for the next rally, and ready on election day.

The fake news will continue their spin of a decline in the President's base.  Many were blocked from entering (they have to have people seated early for security, hence the tighter window), and many left and went home when the thugs decided to crash the party.

That's 4.2M views and again, this doesn't include any views from simulcasts we send out.

I keep seeing FAKE NEWS reporting that there wasn’t an outside audience at the #TulsaRally but from where I sat, you could have fooled me!🤣 #TulsaTrumpRally 🇺🇸 pic.twitter.com/Kjhkt8Up9j