With my tech background and decades of experience in various tech environments, and as a hardcore conservative, this annual Stack Overflow survey is always interesting to me.

Stack Overflow is the main place where students and professionals alike go for help and to help others.  It's the Google of tech knowledge and nothing remotely competes.  They put out an annual survey to their massive audience and this year compiled about 90,000 responses.

Social justice warriors have taken over the development industry.  Their first target was Linus Torvalds, the creator of Linux and Git -- two technologies that are the foundation of the internet and modern software development.  This amazing genius who should have his own statue is too rough around the edges for sensitive snowflakes.

Like the engineers from whom I learned, Torvalds has zero tolerance for laziness and incompetence -- two dominate traits of snowflakes.  Building software applications is fun but its tedious aspects can tempt developers to cut corners that may have user-affecting consequences.  Incompetence is an unforgivable sin and punishment must be delivered in such a way that the offender will never do it again.  Torvalds uses an effective punishment: ridicule.

Thankfully, there's many who do not submit to social justice and are willing to go to extreme measures to fight against the disease.  As in any segment of the population, these social justice warriors are a small fraction yet somehow wield terrifying power and intimidation.  Therefore I'm somewhat surprised Stack Overflow published the results of this survey.

Immediately in the report they give a preemptive apology for publishing results that show men and women are different:

Despite our survey’s broad reach and capacity for informing valuable conclusions, we acknowledge that our results don’t represent everyone in the developer community evenly. We have further work to do to make Stack Overflow the welcoming, inclusive, and diverse platform we want it to be, and this is reflected in our survey sample.

It's mind-blowing how one of the largest and most important sites for technology and productivity kneels before a fraction of the populous for something that has absolutely nothing to do with technology or productivity.  Social justice ruins everything it infects.

Every new thread in a Stack Overflow forum is a question that needs an answer.  There is no chit-chat allowed, and every response must be requests for more information, or a final answer to the question.  I can't understand how anyone could get offended on a Stack Overflow site (it's really multiple sites of various subjects under the Stack Overflow umbrella, e.g. Unix and Linux Stack Exchange).

An interesting point from the beginning "Key Results" summary:

Amazing.  Male developers want to be doing development stuff, while non-males are busy trying to be victims.  I can only imagine what a "toxic work environment" must be.

Back in my day, coders were ultra-competitive and extreme smart-asses.  We'd think we were the smartest developer on the team and would go out of our way to prove someone else wrong and ourselves correct.  If a peer developer would put forth a solution, it would be my obsession to do it better to show intellectual dominance.  Most of us were like that.

Everyone on a team was a potential target for a dogpile.  If an email went out to the group with a misspelling or misplaced punctuation, you would become the joke of the team.  Think of memes before memes, in text form.  I would vigilantly double and triple check every email I'd send to be certain it was perfect because I knew it would be open season and I'd be viciously roasted.  That built comradery and everyone would take it as well as they'd dish it out.

Forget sports.  If you want to see some real competition, put three engineers in the same room tasked with producing the best and most efficient solution to a problem.  I believe this competitive nature of developers led to countless solutions and better technology over the years; I know it did in my experiences.

I think this comradery is called a "toxic work environment" in today's tech culture.  This is tragic.

A few points that might set the social justice warriors' pink spiked hair on fire are women began coding later in life than men, 72.5% of developers are white as Christmas snow, and women are less-experienced coders and more likely to leave the tech industry:

Research shows, for example, that women leave jobs in tech at higher rates than men. Among our respondents, both in the United States and internationally, women are about twice as likely as men to have three years of coding experience or less. Companies interested in building a diverse developer workforce that is more reflective of society should focus on retention of their senior developers from underrepresented groups, along with thoughtful hiring from the population of more junior developers.

It's almost as if men and women are different.  Where have we heard this before?  The survey included sexual orientation which has nothing to do with development.  Nevertheless, 90% of professional developers are men and 93% of coders are straight which must drive the snowflakes bonkers.  The largest chunk of developers are in the age range of 25 to 29 years; the millenial sweet-spot.

More men think their talent is above average compared to how women and those with mental disorders think of their own.  I can say this chart fit me as a young programmer.  I knew I was good and it was a crime the world didn't know it (even though in retrospect I was probably just average).

The survey addresses something called "imposter syndrome" where an inexperienced developer thinks they really don't have the chops to be a coder and don't belong in their job, and have a fear of being exposed and will have to go work at Starbucks.  I've never experienced this but I've heard people admit they felt this way so I suppose it's a real thing. 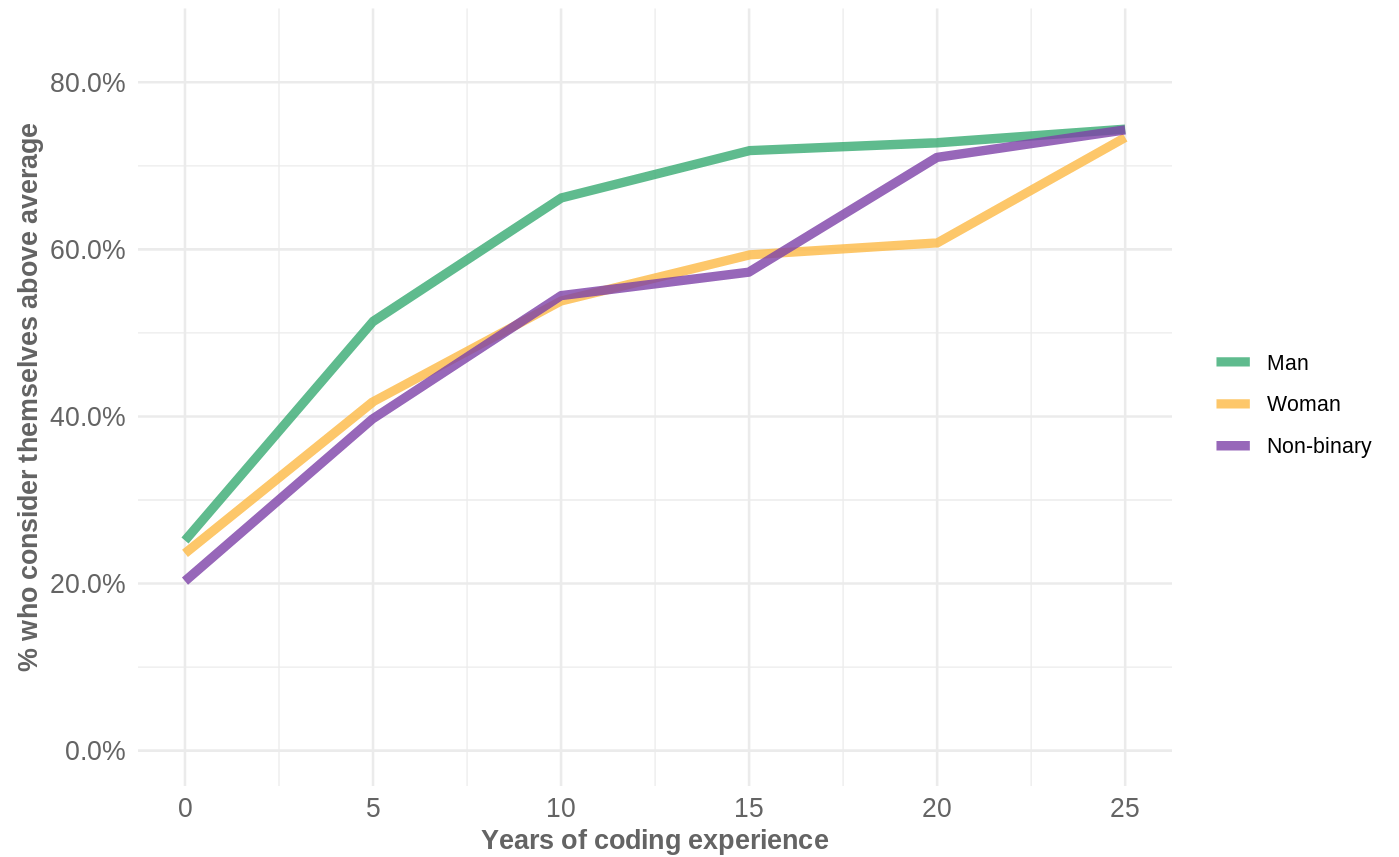 The most interesting part to me was the breakdown of job priorities:

We asked respondents to picture themselves comparing two jobs with the same compensation, benefits, and location, and consider which characteristics would most influence their choice between the two. Different types of developers apply different sets of priorities when considering jobs. 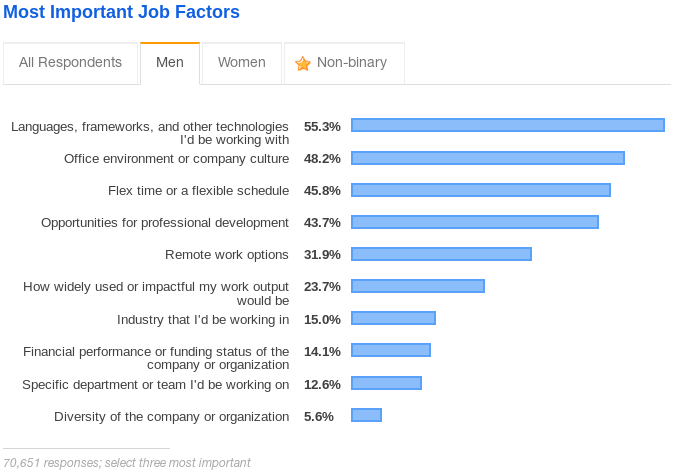 The most important factor for men (real men who know how to change a tire) was the tech.  This makes sense and I can't understand why it wouldn't be priority.  Developers like to build things and solve problems.  That's what being a developer is all about and what makes it fun.

For the environment and company culture, I imagine this means "I want to work at a place that's not a social justice cult, and where I won't get sued if I look at a woman cross-eyed".  Diversity was at the bottom because normal people don't care about that.  We're all humans for Christ's sake. 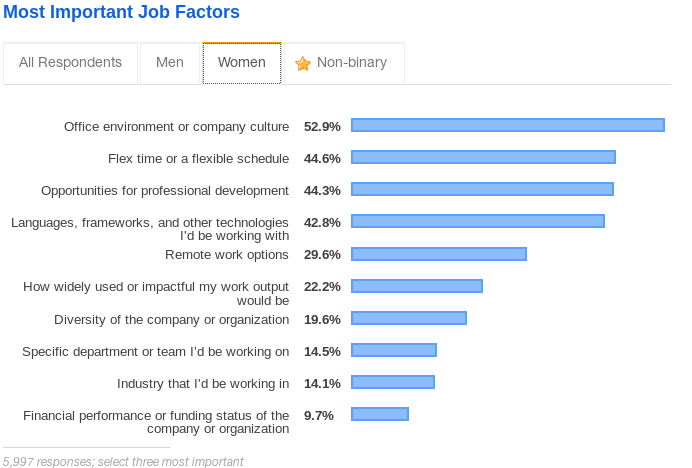 I expected the women to have different priorities, but I'm surprised the tech is 4th.  The flex time and culture I'd expect to be high on the list for mothers, but it's all about the tech.  That's what makes the job fun and dictates your value.

For those with mental disorders: 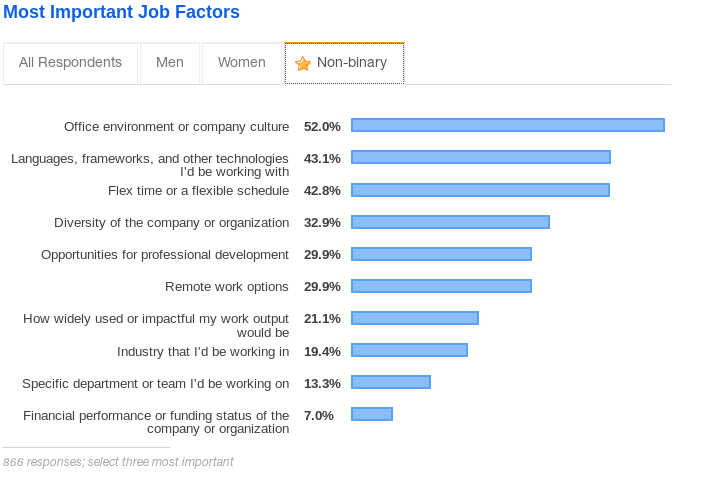 Interestingly, tech is higher than I thought it would be after the women's responses.  Diversity and culture are high as I'd expect and assume they'd be looking for more of a cult-like setting where you have safe spaces and sit on bouncy balls like children.

The responses in this survey show men and women are different, which explains the apology at the beginning to those dedicated to social justice victimhood.  This survey had to break out into more than two genders out of fear of the social justice warriors.

In conclusion, social justice warriors, it's overwhelmingly straight, white men who are responsible for your software that allows you to go online and rant about how oppressed you are and how masculinity is toxic.