With a few briefings under her belt it seems McEnany has restructured the role of Press Secretary to neutralize the steady stream of gotcha’ attempts by the Chinese-controlled American press.  So far I think this is a brilliant arrangement.

The first thing I noticed is during her opening statement, she’s flanked by monitors to provide visual data timed with her statements.  It’s a simple yet very effective improvement that greatly enhances the messaging, which is so Trump.

"From March 1 through May 10, this public-private partnership has led to the delivery of over 113 million N95 respirator masks, nearly half a billion surgical masks, nearly 18 million face shields, and over 12 billion gloves." pic.twitter.com/udZ7yEGtEW

Next I noticed she proudly wears a cross.  Some people may roll their eyes, but this is like forcing a roomful of vampires to stare at the sun for an hour.  It’s another subtle signal to the American people that we’re proudly a Christian nation and it’s OK to put that on full display.  This is not as trivial as it may seem.

One advantage we have is we know the Soros generated talking points for the day because by the time she takes the podium, the CCP mockingbirds have circulated them all morning, non-stop.  This allows her to be overly prepared for the consolidated and focused “does the President still beat Melania?” predictable questions she’ll be fielding.

On the podium, she’s armed with five years’ worth of fake news and lies circulated by every outlet available at her fingertips.  This allows her to quickly recall and redirect fake news accusations, like catching a monkey's poo and throwing it back in his face.

She’s a graduate of law school, which I think is overlooked for a particular reason.  She’s proven she has the chops to navigate the poo-flinging and lame onslaught gotcha’ attempts, but I think this will be important as the #ObamaGate legalities ramp up.

She’ll be able to deliver the facts while carefully navigating the technical legal details and nuances of the evidence.  As the hyenas attempt to twist the facts for the sake of protecting the coup-plotters, McEnany will systematically neutralize and effectively counter.

Listen to her brilliantly set up what Rice's last day was like at the White House:

Oddly, the hyenas seem to be more behaved lately.  I suppose there’s less of them with the distancing rules, but they’re not acting like hyenas as usual.  After Sanders’ exit, the President forced the hyenas to attend pressers on the way to Marine One as he’d head out of town, during the heat, which they absolutely hated.

The President would be slapping down fake news on his feet while wearing a suit in the middle of the D.C. summer for an hour, while the elements beat down on the hyenas.  I think they know they need to be behave, otherwise, they get the chopper pressers again.

McEnany is tailor-made for not only the job with her media experience and legal training, but this time in history where the administration punches back against the swamp.  During Spicer, they were new and the hyenas came in hot and looking for blood after Hillary's loss.  Sanders managed them and set expectations while effectively delivering the messaging through the coup attempts.  We’re in a new phase, where McEnany will manage them, deliver the message, and leverage their own fake news questions against them.

Consider this point: she will serve as the White House’s messenger during the largest political scandal in history, during the most intense presidential race in history, with the most fake news in history.

The White House spokesperson no longer has to stand there and try to dodge fake news.  President Trump has changed the political landscape where the good guys get to punch back and rub the swamp's face in their own poo. 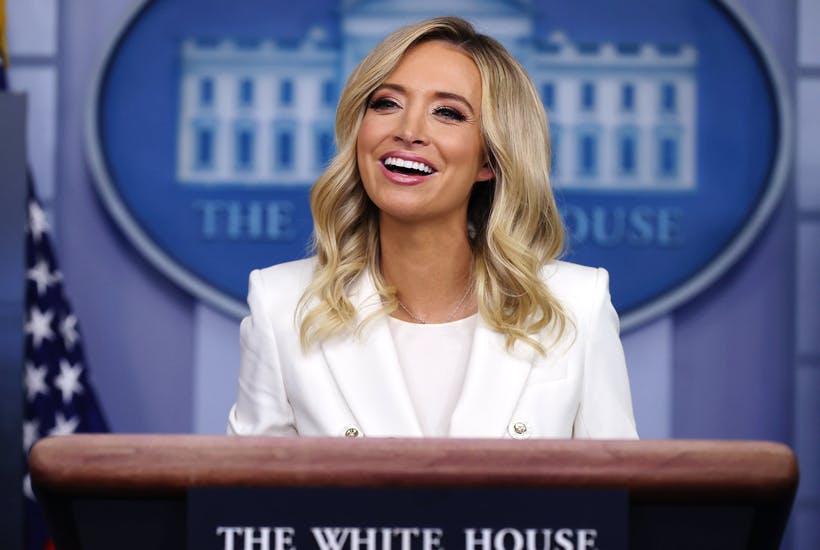