I've been waiting for this.  Over the last few months, the President has been asserting himself as the leader of the Republican Party (as if that was ever in doubt) while allowing the progress of the audits to gain momentum.

After the success in Arizona over the past few weeks, and after the incredible hearing today in Michigan by American hero Matt DePerno, President Trump decided this was the perfect time to turn up the heat.

This is why from the moment I woke up on November 4 to present day, I've had zero doubt that we're in control.  My projection of the timing and sequence of events hasn't necessarily synced up with the path we've been down since the election, but the overall scope is still in play: giving the election system back to the people.

The major Michigan Election Fraud case has just filed a bombshell pleading claiming votes were intentionally switched from President Trump to Joe Biden. The number of votes is MASSIVE and determinative. This will prove true in numerous other States. All Republicans must UNIFY and not let this happen. If a thief robs a jewelry store of all of its diamonds (the 2020 Presidential Election), the diamonds must be returned. The Fake News media refuses to cover the greatest Election Fraud in the history of our Country. They have lost all credibility, but ultimately, they will have no choice!

There's zero doubt about the state of the GOP.  Swamp turd Liz Cheney is getting flushed, while Kevin McCarthy is trying to pretend Frank Luntz and Mao's grandson are just some dudes who let him crash on their couch at the fair market value of $1,500 per month for a D.C. penthouse.

Meanwhile, America-First Congressional Representatives Gaetz and Greene are drawing massive crowds on a MAGA tour while RINO Mitt Romney is getting censured and booed out of GOP events.  To make matters worse for the GOP, President Trump has taken control of the fundraising.

Checkmate.  As Boris Epshteyn said on "War Room" yesterday, the establishment has waved the white flag to MAGA.

Pressing up against the GOP is the third rail of D.C.: the election coup.  At all costs, the cabal CAN NOT let the audits happen, yet they're well underway.  Today in Michigan was a disaster for the enemy, as Matt DePerno made the notion of a secure election look beyond ridiculous in front of a judge.

The Arizona audit continues, and has survived multiple challenges by the enemy, including their inability to put together a measly $1mm bond for a TRO.  They switched judges, got the DOJ involved, are trying to intimidate the auditors, holding equipment, and other actions that make their desperation laughably obvious.

The audit in Maricopa County continues unabated and on target to finish on time.

The Michigan judge won't make his ruling until May 18th, with the overwhelming consensus being that gives the deep-state operatives plenty of time to wage their intimidation campaign.

The President's post last night neutralizes any attempt to intimidate the judge by calling attention to the case and lighting a fire under the Republicans.  I watched most of the hearing and I didn't get the impression that the judge is deep-state, so if there is intimidation, I doubt he wants to be on the side against the people of Michigan and President Trump.

President Trump also does what we in the business world call "assume the sale", where you sort of take the position that they're buying and move the talks in that direction.  In his post, he rightfully and brilliantly sets the narrative that the election is not over and the Republicans must come together to not let it be stolen, going against the fake news narrative that it's over.  They must return the stolen product to the rightful owner.

Do the Republicans want to not unify?  Do they want to drag their feet?  Ask Liz Cheney or Loser Romney how that's working out.  The Democrat Party are stuck and proved they have no money to fight, therefore Republicans are the only viable opposition, as confirmed by Matt DePerno.

Don't let RINOs and dumb people convince you that the election can't be overturned to put Trump officially back in office.  After it's proven to the masses by the audit results, that's the only remedy.  You don't get to steal the election and keep the office.  It doesn't work that way.

Now, the President is whipping up the Republicans to unify against the election coup.

One final big story that's brewing in Arizona you need to aware of, the County and Sheriff have found themselves in legal jeopardy regarding the routers they're trying to desperately hide.  Kelli Ward does an excellent six-minute breakdown on the router situation, and why it's very bad for them and why the router usage itself is grounds to decertify the election.  All five supervisors have been subpoenaed. 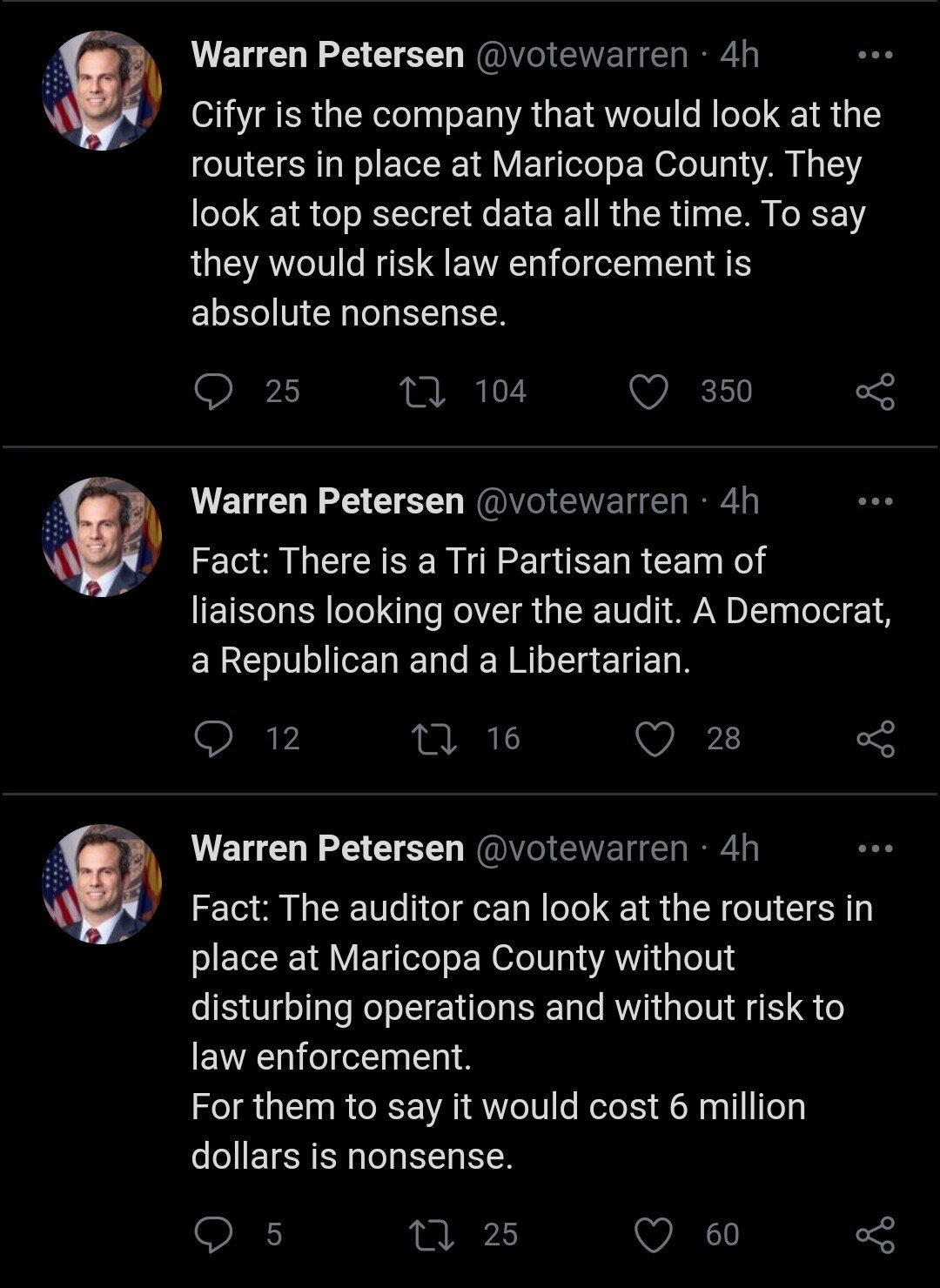