The bitterest arguments in our very bitter times are stemming from wide-ranging disagreements over how to deal with an artificial disease that was manufactured and released by an evil government whose stated aim is to destroy our economic and social structure. While we can – we should – place the blame for the existence of COVID-19 on the Communist Chinese government, too much of our time and resources is being drained from better uses while we scream at one another over face masks and “social distancing.” Perhaps worst of all, too many are consumed with a fight over so-called “vaccines” that have proven so ineffective that the US Centers for Disease Control and Prevention (CDC), an agency of the national government of the United States, has compelled itself to revise the official definition of the word “vaccine” to accommodate the drugs' total failure to actually do what everybody knows a vaccine is supposed to do.

Consider that the most striking feature of the bickering, at least on its surface,  is that it generally ignores what our Leftist cohort enjoys calling “the Science.”

When we consider “social distancing,” for example, and we bring ourselves to look past the oxymoronic “newspeak” quality of the phrase (a public relations problem that even the World Health Organization has recognized), we discover that it may be the most arbitrary standard ever concocted. Not only does the recommended distance vary widely from nation to nation.  But every standard has been simply plucked from the ether, and is often subject to change on a whim. Standard separation distances worldwide have varied from zero to 3 meters, with many other specifications in between: 3 feet, 1 meter (the WHO standard from the beginning), 1.4 meters, 1.5 meters, 1.6 meters, 1.8 meters, 6 feet, 2 meters, and so on. Adjustments to a given number are common, and are generally made without regard to the actual effectiveness of separation, in terms of preventing transmission of the virus. My personal favorite gap is Boris Johnson's “one meter plus,” which went into effect in July 2020 in Great Britain; so precise!

Is “the Science” at work here? While it may seem intuitively true that separating people should reduce the spread of an airborne pathogen, do we know with any precision how this works, and how effective “social distancing” is in real life? The short answer is no. The concept of distancing to slow the spread of disease dates back to the 1930s, when scientists “reckoned” that a meter or two might give an expelled virus space to dry up, blow away, or hit the dirt. Several sources refer to a study published in The Lancet, though the conclusions described don't appear to make much sense, though they may explain Mr. Johnson's choice:

In a study by [sic] medical journal The Lancet, scientists estimated that within the 1m distance, a person has a 13 per cent risk of being infected, but only 3 per cent beyond that distance. Also, for every extra metre of distance of up to 3m, the risk is reduced by half.

In the early stages of the disease, authorities desperate to “slow the spread” and “flatten the curve” snatched at quick and dirty – not to mention cheap – measures such as distancing to throw out as a recommendation. But very soon, the political class began to build on these “oh shit” knee-jerks as they recognized that the virus could be construed as an existential threat.  In the Leftist lexicon, 'existential threat' is spelled o-p-p-o-r-t-u-n-i-t-y. “Social distancing” suggestions quickly became ironclad requirements across the US and around the world. 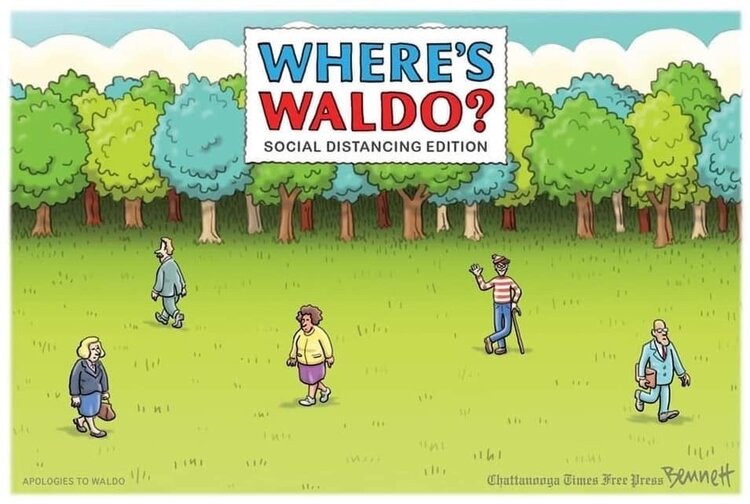 “Social distancing” became one of the early mandates without the benefit of any real science to back it up.

Face masks and “social distancing” are often promoted in tandem, the idea being that they are more effective together than either would be separately. Of course, implicit in this recommendation is the obvious admission that neither measure is as effective as we might like it to be.

Back in early 2020, suddenly everyone wanted to look like Ben Casey. Those clever little dime-a-dozen blue surgical masks were all over the place! Even though it became known relatively quickly that surgeons wear them mainly so they won't sneeze and drop a blob of snot or a partial dental plate into an open body cavity, I still see them today. After a week or two, the new rage was the N95 mask, and within days, our government was moving to secure supplies of those 3M face diapers, for fear toilet paper hoarders might turn their attention to face coverings. Even now, the N95 and its variations are commonly touted as the gold standard for blocking the virus. This is news, of course, to 3M and other makers of N95 masks, who designed them to reduce the inhalation of “nuisance dusts” generated mainly in construction activities. (Think sanding drywall, mixing concrete and other Portland cement concoctions, sawing concrete or asphalt, sanding and painting in a body shop, etc.) It has never seemed to matter that even the packaging for N95 masks has always carried an advisory along the lines of this one I lifted from a genuine 3M brand package: “Not a NIOSH approved respirator. Not FDA cleared for use in health care settings.”

People who are truly serious about protecting themselves and others from potentially deadly airborne diseases look like this.

The COVID-19 pandemic has spurred dozens of surveys and serious studies all over the world in an effort to ascertain the effectiveness of the face masks that are widely distributed and often mandated for protecting us against the spread of the disease. To date, a large proportion of these studies have indicated various harms inflicted by constant mask use, including shortness of breath, oxygen deprivation, carbon dioxide poisoning, reduced alertness, reduced cognitive skills, mood swings, sleep disorders, skin irritation, respiratory stress, and others. But not a single study has shown that the commonly available face masks provide a significant verifiable reduction in the transmission of COVID-19.

Face masks were widely mandated without any real science to back up the mandate.

Baby boomers grew up with vaccines. Most kids of the 1950s and 1960s bear that weird dime-sized scar on one shoulder or the other that testifies to the administration of the “DPT”  vaccines that prevented diphtheria, pertussis (whooping cough), and tetanus toxoids. While not exactly mandated, these inoculations were often a condition of admission to public schools. Most remember the polio vaccines that were widely distributed through the schools in the late 1950s and early 1960s. Later efforts provided vaccines to protect against measles, rubella, chicken pox, and other once-common childhood ailments.

Travelers to foreign countries, especially to those considered “third world,” have long made use of vaccines taken before departure to protect them from exotic maladies, especially typhoid and yellow fever. Military service personnel are often vaccinated against specific diseases prior to being deployed overseas.

All these vaccines are aimed at specific maladies, and all are quite effective, offering more or less 100% protection that lasts essentially for life. (The tetanus shot is somewhat less permanent, requiring a booster every ten years.)

The mRNA COVID-19 “vaccines” developed in 2020 during the US national government's Operation Warp Speed bear little resemblance to traditional vaccines. The level of protection they are reputed to offer is widely disputed. The side effects they inflict are as widely reported as they are poorly understood. Their longevity is hardly worthy of the name, with boosters being administered scant months after the initial set of shots. It is now beyond dispute that “fully vaccinated” people are not reliably spared from either contracting or spreading the disease.

As mentioned earlier, the COVID-19 vaccines, introduced barely a year ago, have fallen so far short of expectations that the CDC has found it necessary to literally rewrite the “official” definition of the word “vaccine.” Before September 2021, the agency defined the term as:

“A product that stimulates a person’s immune system to produce immunity to a specific disease, protecting the person from that disease.”

CDC now defines it this way:

“A preparation that is used to stimulate the body’s immune response against diseases.”

Note particularly that all mention of immunity and protection are now absent; to be called a vaccine, it is now necessary merely to “stimulate” a “response.” A bit of black pepper or a pinch of snuff (used the old-fashioned way) will stimulate sneezing, which is very much a legitimate response to disease. Can snuff and pepper now be considered vaccines under CDC guidelines?

It may defy credulity, but the CDC has vigorously protested that its move to redefine “vaccine” has nothing to do with the widespread instances of adverse jab reactions and “breakthrough” COVID infections and deaths, defined as instances of fully vaccinated people contracting or dying from the disease. (In my home state of Ohio, for one small sample, there have been over 700 reported “breakthrough” COVID deaths in 2021, as of 12/29.)

Note further that the CDC is currently considering changes of a similar nature to its definition of the phrase “fully vaccinated.”  CNN recently reported:

"I'm not sure exactly when that will happen," [Dr. Anthony Fauci] said. "But I think people should not lose sight of the message that there's no doubt that if you want to be optimally protected, you should get your booster."

What it means to be "fully vaccinated" against Covid-19 is starting to play a big role in most Americans' lives -- and being fully vaccinated not only offers some protection against the virus, it comes with certain liberties.

The folly around the “vaccines” continues to unfold on an almost hourly basis, but “the Science” is hopelessly muddled and polluted with politics. Vaccine mandates – especially if we accept the CDC's ludicrous new definition of what a vaccine is and does – are obviously aimed at uniform compliance and conformity, and completely unsupported by any actual science.

Lose “the Science” and Ask the Right Question

“The Science” so beloved by the Left is woefully absent from every aspect of the current debates over our responses to COVID-19. Our warped social media, riddled with the prejudices of “woke” technology corporations who feel free to suppress and outright censor, are not up to the task of logical debate. Our legacy media have completely abandoned their traditional role as watchdogs that question the powers that be in favor of a new role as lapdogs for a single political party. These facts are apparent with respect to practically any current debate, but stand out with particular starkness in the case of COVID responses.

In the US, we are heirs to a legacy of liberty unknown in most parts of the world. As a supplement to our God-given freedoms, we are – or are meant to be – shielded from the vagaries and presumptions of avaricious and arbitrary government by the oldest constitution on the planet. The core principle that upholds the structure of our form of government is the limitation of the government's activities, the reining and careful control of its powers, all of which are derived – grudgingly, suspiciously, sparingly – from the people.

The US Constitution grants the power to make law to exactly one entity – the US Congress. The Congress is not empowered to re-assign that duty to the CDC or any other entity, regardless of cause. If a “law” emanates from anywhere except the Congress, the representative body acting with and through the just powers it derives only from the people, that law is void on its face.

The “debate” over mandates rightfully pivots on the answer to a single question: Is it legal? If that answer is 'no' – as it demonstrably is – then further consideration is pointless and counter-productive.

Let us move on.