One of my faves is Anonymous Conservative, and he posted an interesting article on Scott Adams' buffoonery a few days ago.  Give this article a quick read first.

Watching Scott Adams lose credibility over the past few years has been a little sad for me to watch, but he's really spiraling as of late.  If his credibility were a jetliner, instead of being quiet, going back to his seat and putting in his earbuds, he yelled "Screw it! Let's roll!" and rushed the cockpit to push the stick all the way forward.

Everyone is dog piling on his lunacy: 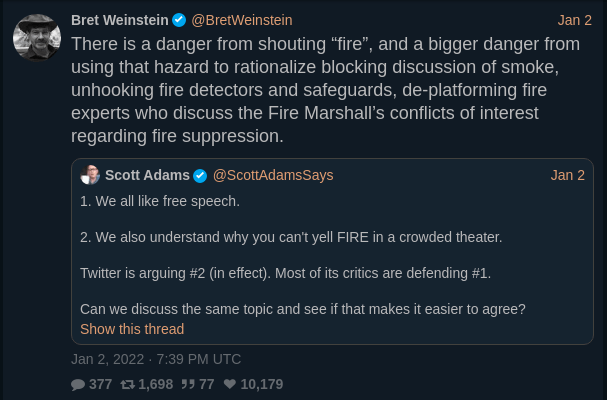 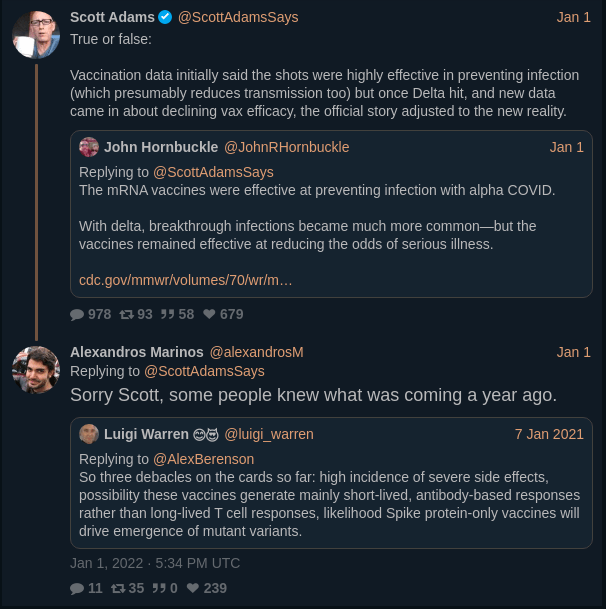 That's a good question from Jeff Carlson: what DID happen to Adams?

In my late teens, when I was an up-and-coming software developer at the beginning of the tech boom, Adams' "Dilbert" cartoon was a staple in the tech world, because he absolutely nailed the plight of a cubicle-confined worker drone having to deal with his co-workers, stereotyped to perfection by Adams, all the way up to the clueless boss.

The way he nailed corporate tech at that time made me certain beyond any reasonable doubt he was a genius.

I didn't start to sour on him until he looked like an absolute fool trying to get into the global warming hoax debates, pretending to be open minded and genuinely curious about the overarching discussion.

Since he didn't understand it, or couldn't figure out who's legit and who's not, he didn't think anyone could, and that there was too much to the topic to really be correct.  Odd, because Arctic sea ice is as cold as ever, polar bears are reproducing like rabbits, trees like CO2, and we're still not under water.

I've been 100% correct over the past ~30 years; "climate scientists" that have Adams' respect, have been wrong.  Why do I have a perfect batting average, yet it's too complicated for me?

Adams was getting trounced so bad that his old Dilbert strips were being used against his arguments.  It was hilarious.

When I read AC's post about Adams, I laughed because he absolutely nails it.  The stuff he says is so dumb that it can't be because Adams isn't smart enough.  I think Adams thinks he's smarter than he is, hence why he thought he could navigate the topic of AGW, but ended up getting spanked and robo-blocking everyone who threw him a curve-ball.

Adams is doing the same thing with the CCP virus, disparaging Dr. Peter McCullough, Dr. Robert Malone, just like he did with, say, Tony Heller.

But why?  I've always said that for anyone, including Joe Rogan, that the global warming hoax is the red line.  If you touch that third-rail, you're done.  It's why Rogan can dive into the topic of the CCP virus, but he knows he not dare do so with the global warming hoax.  Spotify would dump him on his head and he'd have NO recourse.

AC had a great anecdote using his chemistry lab experience to show why Adams is a moron and speaks about what he doesn't know.  Again, with Adams, if he doesn't understand it, or ignorant of the topic, then therefore nobody can.

Really, Adams is just full of crap, and he has a big enough of a devoted following where he can get away with it.  It's like playing poker online versus playing in real life.  He can hide on Twitter and block people, but he wouldn't dare get into a conversation or debate with a Dr. Malone, or a Tony Heller.

Someone like Rogan could moderate such a debate, and the entire world would see it, as Rogan, as much as I think he's a clown, is currently the undisputed king of digital media.  He wouldn't moderate a debate over the global warming scam, but he would with a debate over the CCP virus.

Oh man, how huge would that be?  That would break records.

I think AC is on the right track about why Adams would be making himself look like a fool:

Was Adams, a noted influencer, not approached at all? That would seem unlikely if all those entities are recruiting prominent influencers. Was he approached and refused? Or might he have been approached and taken some form of recompense? If he was approached, as seems likely, why would he not inform his audience, saying, “Hey this is crazy, but, I was just offered $XXX,XXX to tell you guys “YYY YYY.” So be warned, not everything you see on twitter may be honest opinions. People with agendas out there are paying people off to manipulate you.”

It would be interesting to see somebody ask him point blank, but broadly drawn, “Did anyone ever approach you about saying anything related to public health?” For that matter I would also like to know if he is invested in any vaccine manufacturers.

Because all his dancing lately looks little like a persuasion trick that has everyone debating whether he was right or wrong, and not why he may have been advocating the vaccines, or if there was any personal interest or ulterior motive there. And he is, by his own words, a master of persuasion.

Why not?  I agree with AC that Adams can't be that stupid, and I too lean towards dishonest, but I have one other thought.  I think people place too much blame on "trying to make money", or "doing it for the dollar".  I can tell you, money isn't everything, and when you have more of it, it's less of a motivating factor, generally speaking.

In business, when you have money, the competition or the challenge can overshadow the potential to make money.

Money is easy to blame because most people are conditioned to associate money with bad or evil (I'm not saying AC feels that, but I'm speaking in general).  "If he's doing something illegal or unethical, it's because of money."  Does the bank manager who's wife and kids are being held hostage at gunpoint give up the vault combination for money?

Think about the Joe Rogan interview when Dr. Malone talks about the doctors losing their licenses, or those who toe the line because they fear such repercussions.  Is that for money?  Or is that out of fear of losing their licenses?  Or perhaps they have kids looking for jobs at hospitals or universities, and if daddy doesn't shut his mouth, those opportunities go away.

You get the point.

Who knows why Adams would willingly look like a fool, but I get the sense that he doesn't want to do it.  He cares about looking smart in front of smart people.  Why would he no longer care about that?

Ultimately, I don't really care about Adams, but I really was hooked by AC's article.  I also get easily annoyed by people who pretend to be a lot smarter than they are, and try to mislead people, and I think that's what Adams is doing for whatever reason. 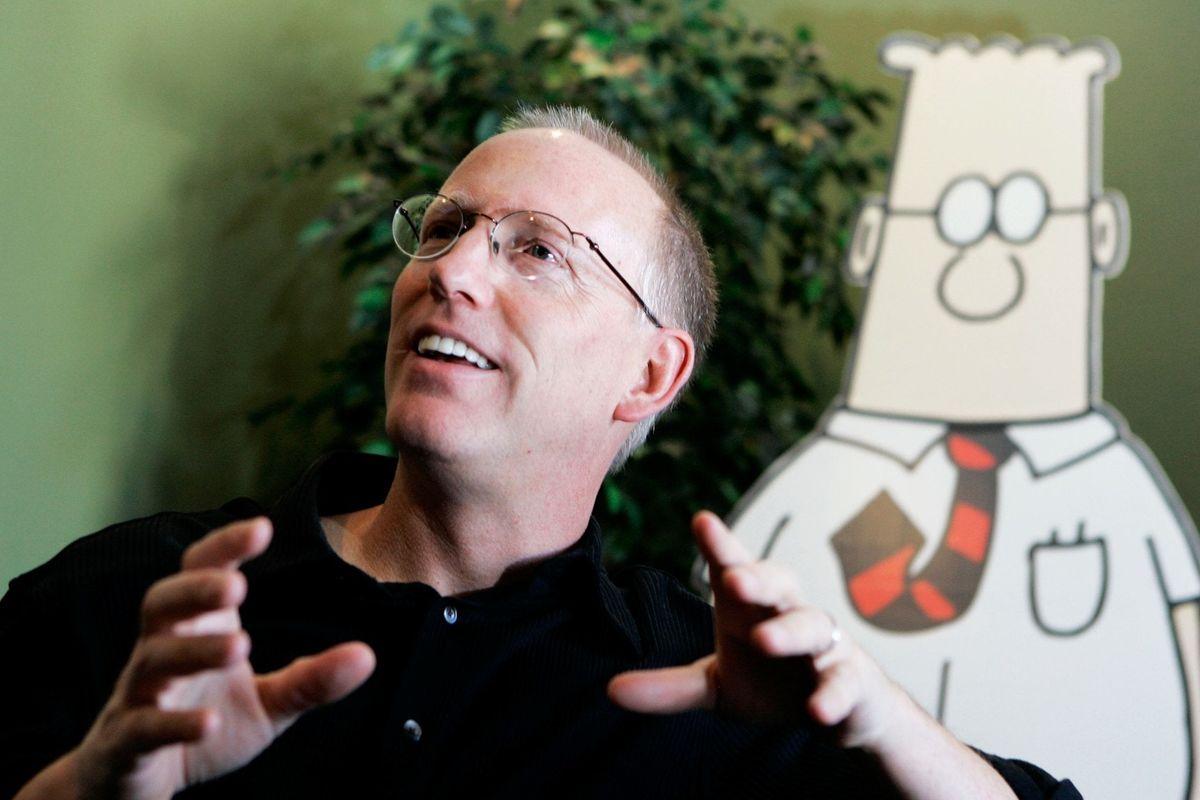