Incredible news and progress from the Maricopa County audit

I'm nothing short of ecstatic over what's been happening in Arizona.  The auditors have been operating in a secure, transparent, and efficient manner while not being intimidated by fake news clowns, a Sheriff who was put into office by Soros, or a playtime DOJ who understand they won't be in the DOJ once the results of the audits prove President Trump trounced Creepy in all fifty states.

I'm hearing more chatter like "but... wait... what happens after the audits prove Trump was the winner???".  Exactly.

There's no news story more important than these audits.  Forget about Chauvin, or the communists tanking the economy, or China dropping satellites on trailer parks in red states.  Those are important, but the root of the evil behind these stories is destroyed once we gain control of our election system.

The reality is we're too far into these audits for anyone to sweep it under the rug.  Fake news can cry "conspiracy theory" all they want, but the facts are the facts, and this train has left the station.

Maricopa County is outright refusing to hand over the routers used the night of the election coup.  Routers have all kinds of juicy data that provides great forensic detail of what was happening at the time, where packets were going, what devices were sending out ARP requests, when were configuration changes made, and on and on.

What types of goodies are we expecting to find in Maricopa?  Let's look to Michigan for a preview: 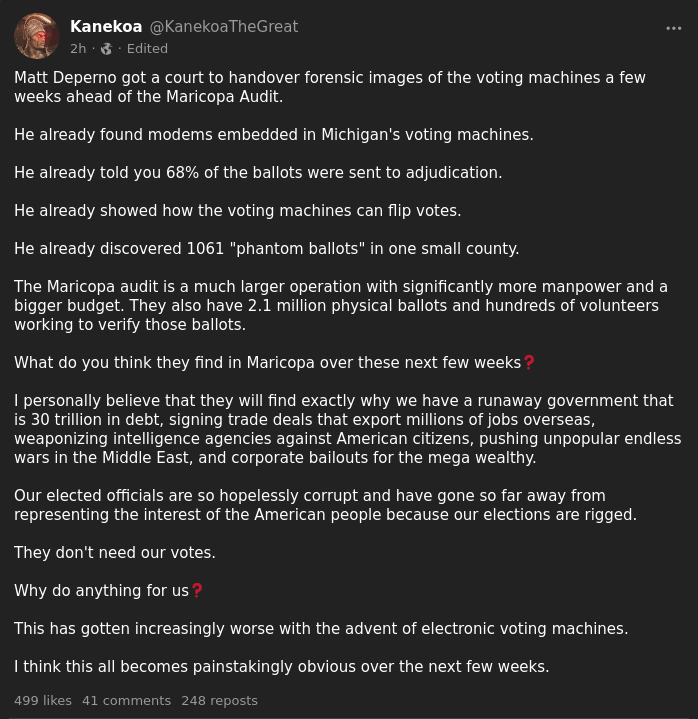 (Side note: KanekoaTheGreat is an excellent follow for the audit happenings).

One fact I've learned over the years is the tech people involved in any Marxist-organized crimes are not very bright.  They're the equivalent of a hit man hired to stab someone to death, but they dropped the knife on the body with their fingerprints, and when they ran away, they left a trail of blood-stained shoe prints leading to their front door.

Once you understand these communist organizers don't hire the best, but hire by race, connections, nepotism, or they have a degree with a PhD in hating Trump, or any qualification besides actual skill and talent, you begin to understand why we're winning and penetrating enemy territory daily.

These untalented losers have no ethics and have no problem breaking the law for the communist revolution.  For a famous case study, research how laughably easy it was to prove Hussein's birth documents were forgeries.  The best of the best of document experts said it was the worst they've ever seen.  This is the type of incompetence involved with the election coup, a far more complex cyber-crime.

High-end, in demand tech people have good ethics, for the most part.  It's harder to find someone really, really good at their craft where they make a living by being right, competent, and dependable, yet willing to break the law.  Even fewer are willing to lie to investigators or commit perjury.

These low quality clowns who possess somewhat better-than-average technical competence are not very good at covering their tracks, especially when the pressure is on from the deep-state to execute the most complex crime in history with no time to prepare or clean up.

This is why they're not turning over the equipment.  They know the routers are stocked to the brim with evidence, and each device is another nail in the coffin of The Big Lie, putting President Trump one step closer to publicly re-taking the oath.

There's no other remedy to the stolen election other than President Trump starting his second term.  If it seems far fetched to you, why?  What is so unreasonable about awarding the presidency to the person who not only won it, but won it bigly?

Back to Maricopa, the county Board of Supervisors found themselves in a real pickle.  The Arizona Senate called an emergency session and told them action will be taken if they don't turn over the equipment and admin passwords to the auditors.

Here's where this goes off the rails: the county says they don't have the admin passwords to the voting machines!  To put another way, Dominion has control over the Maricopa elections, not the county.  This is a stunning fact that's been exposed.

Ultimately, the auditors will gain access to the machines because cracking those passwords is like me guessing my nephew's favorite superhero.  The machines are horribly unsecure.

We learned another unbelievable fact that proves how insanely unsecure the voting in Maricopa was: the devices with the totals were taken off-site to who-knows-where nightly during the election.  Why is that even more perplexing?  Yesterday, Jack Sellers, a county supervisor, ADMITTED that access to the routers "could potentially allow someone to intercept sensitive data".

Only a stupid never-Trump RINO would believe this election was legitimate. CodeMonkey sums it up nicely:

First Arizona, then Pennsylvania and Michigan, then Georgia, then all fifty states. Make no mistake, what's happening now in Arizona and the upcoming audits in other states is in the same league as the American Revolution because we're reclaiming our independence, albeit cyber instead of rifles.

To quote GEOTUS, "We're taking our country back, folks."