The Great Depression Generations – Then and Now

There is no more tumultuous and impactful time in modern history than the decades of the 1930s and 1940s. With a worldwide economic depression at its beginning, a hardening cold war at its end, and an incredibly bloody world war in its middle, this period defined the twentieth century as a saga of humanity violently tossed by uncontrollable events.

Closer to home, this period, which began with deep economic calamity, wrought changes in the political landscape that remain very much in place today. Combined with the seismic movements that came out of the first Progressive upheaval in the Teddy Roosevelt/Woodrow Wilson era, the middle part of the century altered literally everything in American politics. It is fair, in fact, to describe the FDR/Truman reign as the second Progressive upheaval.

Officially described as beginning in the aftermath of the stock market crash of October 1929, and deepening into the early 1930s, the Great Depression outstripped previous economic downturns in its depth and especially in its tenacity. The American economy was shaken to its core, and along with economic uncertainty and calamity came social misery. As jobs vanished and commerce dried up, families disintegrated or resorted to activities unheard of before. Concurrent calamitous weather in the Great Plains turned the nation’s central breadbasket into a barren desert of blowing dust, and thousands of suddenly rootless farm families wandered in search of better times, or at least the comfort of company in their misery.

The Depression is the only period in 20th century American history, and the only time since the formation of the central banking system in 1913, when the US dollar actually increased in value over an extended length of time. Decimated by a period of intentional currency inflation during the first World War, the dollar had plunged from its pre-Federal Reserve heights, but then stabilized nicely through the Roaring Twenties. After the crash, the US dollar gained 32% on its value from 1929 to 1933. Cash was truly king, especially in the early Depression years. But that’s because hardly anyone had any of it. This lesson was learned the hard way, and not soon forgotten.

The Depression ushered in a period of rejection, and even hatred, of the Republican Party in the United States. Warren Harding had succeeded the debilitated Democrat Woodrow Wilson in 1921, but Harding died just two years into his term. His vice president, Calvin Coolidge, finished the term and won re-election in 1925. Herbert Hoover won the office in 1929. All three men were GOP stalwarts of their day. None had much, if anything, to do with the stock market crash that terminated Hoover’s effectiveness late in his first year in office. But all were afforded the blame, and Hoover’s share of the blame was overwhelming. Roadside camps of itinerant farmers and hobos were nicknamed “Hoovervilles.” Soup and bread lines led to “Hoover kitchens.” Journalist Nicholas Lemann has claimed that Hoover was “the politician who managed to turn a Republican country into a Democratic one.”

In truth, any honest assessment would put the lie to that claim. But politics isn’t about truth or honesty. Politics is about power, and a great deal of power changed hands when the stock market went south in 1929.

After the mid-term elections in 1930, Democrats took over the US House of Representatives. As Lemann describes it, “The Democratic majority in the House of Representatives that began during Hoover’s Presidency lasted for all but four of the next sixty-two years.” In the Senate, the 1930 election erased the GOP’s previous majority, leaving the body tied between the parties. Over the next three elections, Republicans in the Senate would lose a jaw-dropping 24 more seats, and would remain in the minority for all but four of the next 58 years.

An example from my world

I grew up in a typical American household established by a member of the Greatest Generation and his lovely wife. They cranked out four children while Dad worked his steady job at General Motors’ Frigidaire plant in Moraine City, near Dayton, Ohio. We were taught Christian values. We went to church regularly. As the only boy, I learned to change the oil in Dad’s car and how to swing a baseball bat and how to cast a fishing line and how to be silent while stalking with my shotgun in the squirrel woods. I learned how to fight, and when it was a good idea. I learned the value of honesty and hard work. In short, I learned just about everything there was to know about being a good conservative Republican.

During the 1964 election season, I was a noisy fourth-grader. Even then, the teachers in our public schools were mostly Democrats and not shy about letting it show. I remember the routine of that time in the boys’ restroom, where one wall was lined with a seemingly endless parade of gleaming urinals. Beginning at the first one on the left, you had to count them off by name, “Goldwater, Johnson, Goldwater, Johnson….” We peed on Goldwater. If things got really jammed up and you had to take a leak in a Johnson receptacle, it was “just a shower.”

About that time, I remember a scene at our family dinner table one evening. I asked my father what I thought was a simple question, and one that was certainly relevant and important at the time. “Dad, are we Democrats or Republicans?” My father stopped eating and gazed at me as if I had suddenly sprouted a third eye in the center of my forehead. “We’re Democrats, son,” he said in a voice of doom I seldom heard. I knew never to ask that question again.

My father was born in 1926 to a middle class farming family in southern Ohio. He quit school after the eighth grade to help on the family farm. In 1943, when he was seventeen, Dad joined the US Navy and served the remainder of World War II at sea on a Fletcher-class destroyer while little yellow men from a country he had never seen tried their best to kill him. The first president my dad could remember was Franklin Roosevelt. When my dad turned 19, a grown man in uniform halfway across the world in the middle of a war, Franklin Roosevelt was still president and the Democrats still held the Congress.

My father literally grew from childhood to maturity while Democrats held every part of the federal government and Franklin Delano Roosevelt sat in the White House. I used to call him a “knee-jerk Democrat.” But in retrospect, I think he simply didn’t know how to be anything else.

This trend extended beyond Roosevelt’s death in office in 1945. FDR knew he was dying before his last presidential run, and he jettisoned his socialist (many say Communist) vice president, Henry Wallace, for a relative newcomer, Harry Truman, knowing that his VP would likely soon be president. Truman extended FDR’s programs and his administration for nearly eight more years, making a total of twenty years with a single party in power in the White House, a feat not replicated since.

Truman was followed by Dwight Eisenhower, a five-star war hero of the European Theater of Operations, the bemedaled, soft-spoken Kansan who had administered the defeat of Hitler’s Nazis. Though completely apolitical, Ike was inundated with pleas to run for the nation’s highest office in the coming 1952 election. For reasons never explained, he chose to register as a Republican in 1951, and was elected on the Republican ticket, with Richard Nixon as his vice president. Ike spent eight years proving at every turn that he was neither a conservative nor a Republican. Except for his first two years, Ike dealt with a Democrat-controlled Congress for his entire presidency.

John Kennedy, a so-called “liberal Democrat,” became the Leader of the Free World in 1961. His vice president, chosen to balance Kennedy’s blue-blood New England roots, was Lyndon Johnson, a Democrat senator from Texas. After JFK was assassinated in Dallas in 1963, Johnson took the reins and remained in office until 1968. Both men enjoyed solid Democrat majorities in both houses of Congress during their times in office.

When LBJ left office in 1969, he was replaced by Richard M. Nixon, a man of questionable moral qualities and rather shaky conservative chops. His VP, Spiro Agnew, was so corrupt that he was forced to leave office abruptly in 1973 when he was convicted of failing to pay taxes on bribes he had taken while governor of Maryland. Nixon himself was forced to resign from office, as no president has done before or since, due to the political fallout related to the Watergate burglary and the subsequent cover-up.

Agnew’s appointed replacement was former Michigan congressman Gerald Ford. Upon Nixon’s departure, Ford became the only US president never elected to national office. Saddled, as had been his predecessor, with a strong Democrat majority in both houses of Congress, Ford, an inherently decent but utterly unexciting man, was an ineffective placeholder who merely filled the space in the Oval Office until the 1976 elections.

Rounding out this saga is James Earl Carter, Jr., a peanut farmer and former Democrat governor of Georgia. Carter served only a single term, from 1977 to 1981. Plagued by a poor economy and hampered by an uninspiring persona, Carter accomplished little, except to curse the nation with a federal Department of Energy and a federal Department of Education, both sops to single-issue constituencies that helped put him in office.

Over the course of two full generations, from 1933 to 1981, except for the final two years of Truman’s first term and the first two years of Ike’s first term, Democrats held both the House of Representatives and the Senate. Out of the 24 consecutive Congresses during that period, all but two were completely in the hands of the blue party.

Back to the real world

On the day I was born in a Dayton hospital in 1955, Democrats held both houses of Congress and a weak Republican was in the White House. All through my school years and well into my adulthood, little changed.

I was 26 years old, with a son of my own, before the US Senate seated a Republican majority leader and the American people elected a conservative Republican as president. I had turned 40, with two kids in high school, before the House had a Republican speaker.

Economists and some historians claim that the Great Depression ended in 1940 after (actually in spite of) nearly eight years of misguided efforts by Democrats to fix it. Those economists and historians are wrong.

The attitudes and legacies begotten by the Great Depression altered the American political and social landscape for more than half a century, a time when I was born and grew up literally wondering if there was some kind of law that said Congress had to be run by Democrats. 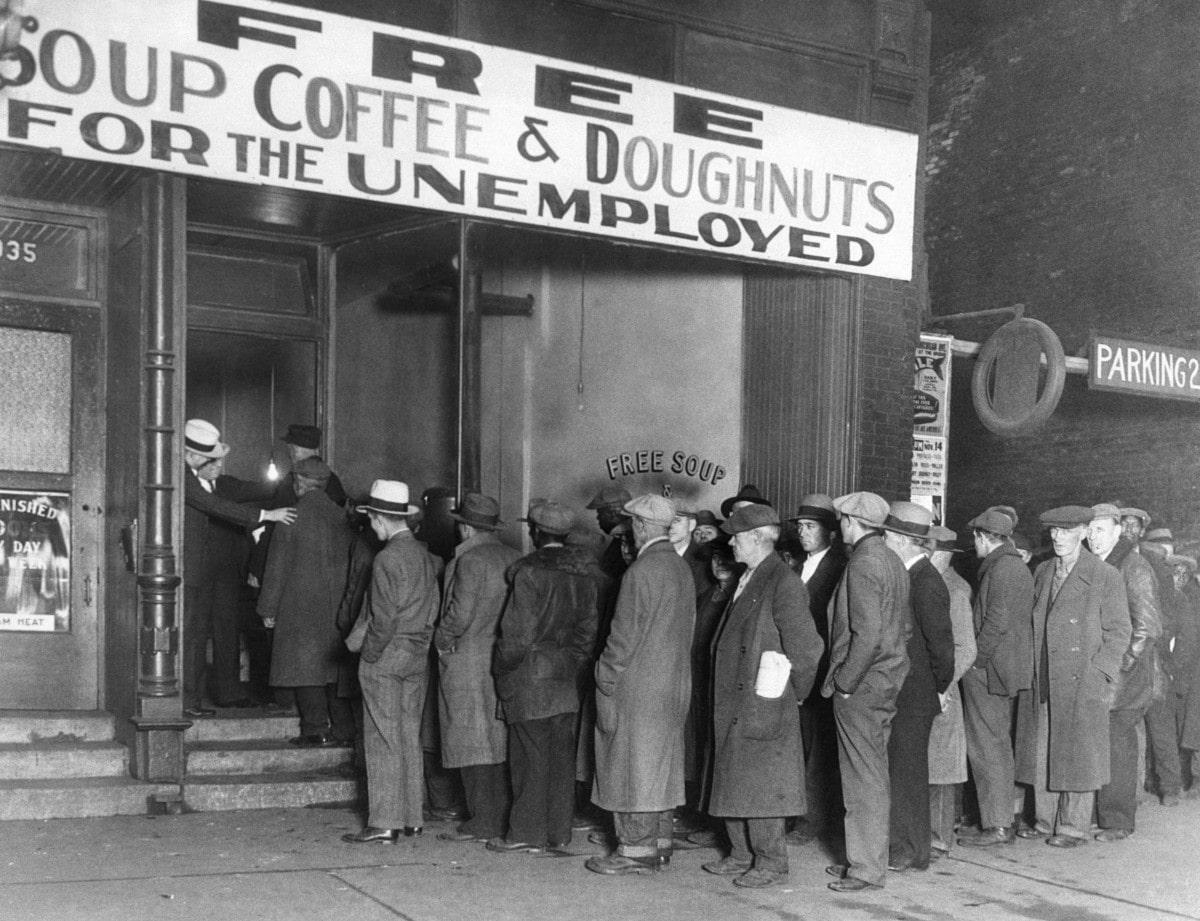