The latest consumer confidence numbers show the economy is still going strong despite the negative outlook from the Chinese-controlled financial pundits and anti-business academics on cable news.  Things are good because of the return to strong market fundamentals, and most importantly, Obama is not in office.

How good is the economy?  It's so good that main stream polling, which absolutely hates Trump and loath giving him credit, have no choice but to show his extremely high economic approval numbers.  Even CNN had to admit his polling on the economy is "the highest we've ever seen":

The economy under Trump is extremely durable.  As the academic pundits continue to swarm overhead like vultures, waiting for a hint of decline, the numbers continue to be strong, consistently "defying expectations".  There’s dips here and there, but that’s nature, and the trend continues strong.

It’s not only the case that the academic pundits simply hate Trump and are blind to basic economics; they also don’t understand it.  They truly don't.  Nobody is more clueless about business and the economy than an economics professor or journalist.  Bernie Sanders supporters fall into these categories.  This may sound hyperbolic, but these are the people who literally believe, for example, that unemployment is a stimulus for the economy, and breadlines are "a good thing".

These people think there's more than two genders and cow farts are baking the planet.  Why would you think this idiocy doesn't carry over to their understanding of economics?

The louder the pundits scream and tell you how things are bad and Trump is hurting hardworking Americans, the more you can rest assured that things are actually good.  Most of the screaming is over the stock market, which has nothing to do with the economy.  That may sound odd, but it's disconnected from you having a job and your economic activity.

President Trump is wrestling economic control away from the globalists and they're screaming like stuck pigs.

Unemployment is low, forcing wages to rise; investment dollars are flowing back to the United States; regulations are getting whacked, removing the boot from the neck of business; more workers means more dollars circulating through the economy, which means economic growth.  Economics is not complicated.

For all the credit President Trump gets for his economic agenda, Obama gets an equal amount of credit for not being there.  This yin of a pro-business president in office and the yang of an anti-business president out of office creates this confidence among business owners and consumers alike.  I like the tornado analogy, where the hot air and cold air create a natural force that is far more powerful than the sum of the two.  Economics truly is nature.

The worst thing to happen to the economy was Obama, yet it clung on for dear life with small miracles keeping it alive, like the boom in the fracking industry.  I'll contradict myself in giving partial credit of the strong economy to Obama.  After everything businesses and consumers went through with Obama, that abuse made us super-durable and tough, so when a pro-business president came along and gave the economy just a little bit of love, it began to recover and grow quickly.

Obama gave us the confidence that we can survive anything, so some trade and supply-chain realignment with China is no big deal.

The latest pearl-clutching from the Chinese-controlled academics involves China's taunting of leverage with rare earth minerals, which is very important to our electronics industry and for national security.  Hilariously, President Trump was way ahead of the game and issued an executive order back in 2017 to get a handle on this issue and neutralize any leverage China could have.  Not only can we supply ourselves with these materials if we get the EPA out of the way, we can buy them from Australia, or other allies like Japan who just discovered a nice patch last year.

Of all the stupidest fear mongering I've heard from the Chinese-controlled financial pundits, it's that China could start dumping our treasuries.  The only value China holds is our treasuries, and if they started dumping them, the Chinese people would be carrying around the yuan in wheelbarrows.  If they did dump, who else would possibly want to buy the most stable and liquid securities on the planet?  (hint: everyone)

The China trade situation is a blip on our radar that will soon go away.  Under President Trump, we are independent of other countries holding any trade leverage over our head.  We can supply our own food, energy, and goods like steel.  These are American jobs and American independence.

BIG NEWS! As I promised two weeks ago, the first shipment of LNG has just left the Cameron LNG Export Facility in Louisiana. Not only have thousands of JOBS been created in USA, we’re shipping freedom and opportunity abroad!

The majority of the people give credit to President Trump for the economy:

A stunning 71 percent of voters viewed the economy as “strong” or “very strong.” 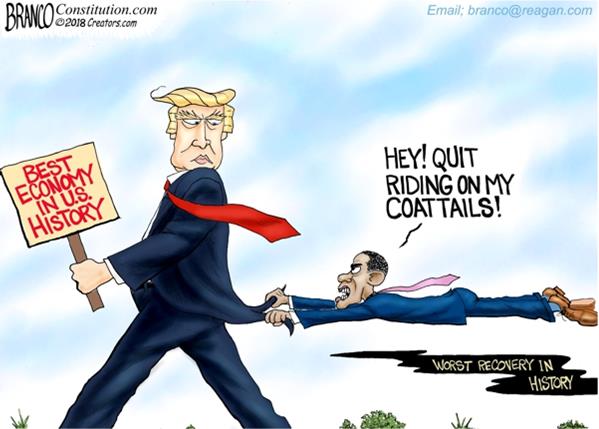