When you think of the “Russia investigation”, what’s the first thought that comes to mind?  Likely Trump accusations of collusion, Sessions’ recusal, and events we nail down by our interpretations of declassified documents, testimonies under oath, FOIA releases, and other such official bits of information as they're released.

Here's the punchline: when Attorney General Bill Barr finally gives his briefing to the public on the Durham investigation, what if we learn it was about an investigation into Hillary that's been running since September of 2016?

I was in a private chat room with Sgt. Friday, Stacy Karma, agam68, and a few other Spygate wonks as they hammered out this theory based on DNI Ratcliffe’s letter.  I’m essentially taking the role of scribe from those private chats, and from Sgt. Friday’s video below, infused with a few points by me.

We learned from declassified notes written by Peter Strzok about the January 5th, 2017 “by the book” meeting in the Oval Office that he took notes of the meeting.  Ask yourself this question: why do we think Strzok was in the room?  We know Comey, Obama, Sally Yates, and Joe Biden were in the room because of Susan Rice’s declassified “by the book” email she sent to herself on inauguration day regarding that meeting.  However, she doesn’t mention Strzok.

If Strzok wasn’t in the meeting, then how did he take notes?  We’ll come back to that.

“In late July 2016, U.S. intelligence agencies obtained insight into Russian intelligence analysis alleging that U.S. Presidential candidate Hillary Clinton had approved a campaign plan to stir up a scandal against U.S. Presidential candidate Donald Trump by tying him to Putin and the Russians' hacking of the Democratic National Committee. The IC does not know the accuracy of this allegation or the extent to which the Russian intelligence analysis may reflect exaggeration or fabrication.”

What Hillary did here is not a crime, at least as specified here. You can run for office and frame your opponent as the JFK shooter; it's not necessarily illegal.  If something illegal happened, it was likely on the government side.

When did we first hear of the allegation of Trump-Russia collusion?  It was the eve of the DNC convention on July 24th in an interview between a Clinton campaign operative and Robby Mook:

“According to his handwritten notes, former Central Intelligence Agency Director Brennan subsequently briefed President Obama and other senior national security officials on the intelligence, including the ‘alleged approval by Hillary Clinton on July 26, 2016 of a proposal from one of her foreign policy advisors to vilify Donald Trump by stirring up a scandal claiming interference by Russian security services.’”

FACT: Brennan briefed Obama on what Hillary was doing.

Obama was aware of these first two bullet points, yet he never disclosed this information to the public.  Let that soak for a moment.  Obama did say Russia interfered with the election, but he left out the part where it was a lie manufactured by Hillary Clinton.

This tweet by President Trump takes an entirely new context:

A little over a month ago, John Brennan wrote an "orange man bad" op-ed in The Washington Post.  Knowing what we now know from Ratcliffe's letter, look at this whopper (including his lie about the date of the Obama briefing):

Just a little more than four years ago, the United States faced a similar challenge — and met it a different way. President Barack Obama already knew the Russians were hacking into the networks of U.S. presidential campaigns, but on the afternoon of July 28, 2016, I informed him in a hurriedly scheduled meeting that Russian President Vladimir Putin had authorized his intelligence services to carry out activities to hurt Democratic candidate Hillary Clinton and boost the election prospects of Donald Trump.

“Mr. President,” I said, “it appears that the Russian effort to undermine the integrity of the November election is much more intense, determined, and insidious than any we have seen before.”

My reference to the unprecedented scale and scope of Moscow’s efforts to harm the integrity of the election quickly riveted the president’s attention. It also triggered the immediate concern of the others in the room — including Chief of Staff Denis McDonough, who asked, after I was done speaking, “What are you planning to do on the congressional front?”

Brennan lied when he wrote that he briefed Obama on July 26th, and he knew the Russia lie was manufactured by Hillary.  This guy is a real piece of work.

I misread the second item regarding the briefing date.  The July 26th date was when Hillary approved her plan, NOT Brennan’s briefing date.

Now for the final bullet point, and it's a doozie:

“On 07 September 2016, U.S. intelligence officials forwarded an investigative referral to FBI Director James Comey and Deputy Assistant Director of Counterintelligence Peter Strzok regarding ‘U.S. Presidential candidate Hillary Clinton's approval of a plan concerning U.S. Presidential candidate Donald Trump and Russian hackers hampering U.S. elections as a means of distracting the public from her use of a private mail server.’”

It's not definitive that the referral was on Hillary herself, but "regarding" the approval of her plan (whatever that entails). We need to know more about the referral itself.

Who sent this investigation referral to the FBI?  Was it Admiral Rogers?  One sticking point for me about Strzok potentially involved in a counterintelligence Hillary was who ordered it?  It makes sense to me that it's Rogers.

We’ve been under the impression that Rogers flew to New York to meet with President-elect Trump on 11/17/2016 likely to warn him that he was being spied on by Obama.  Instead, did he really meet with him (Trump) to ask that he not immediately fire Comey after the inauguration because of the ongoing investigation into Hillary Clinton?

Why could it be likely that Admiral Rogers issued the referral?  Because on April 18, 2016, Rogers shuts down the the FBI/DOJ contractor access to the FISA database and notified Director Comey of illegal search queries.

For those of you thinking "nothing's happening" and Barr is taking too long: how many contractors all over the world had to be investigated?  How many rouge agents that are invisible and hidden had to be tracked and identified?  There are a lot of questions.

With this new context, listen to this snippet of this interview with President Trump by Lester Holt:

“As far as I’m concerned, I want that thing (investigation) to be absolutely done properly. When i did this now I said I probably, maybe will confuse people; maybe I'll expand that, you know, I'll lengthen the time - because it should be over with - it should, in my opinion should have been over with a long time ago because all it is an excuse, but i said to myself I might even lengthen out the investigation, but I have to do the right thing for the American people; he's the wrong man for that position.”

In the recently released text messages involving Peter Strzok, he mentions several times about blowing off Durham.  It seems like he wasn’t worried about the interview.

Because of the classification, the Gang of Eight was not briefed on the investigation into Hillary that was (likely) opened on September 7, 2016.

Circle back to Peter Strzok’s notes on the January 5th “by the book” meeting in the Oval Office.  Were Comey and Strzok surveilling the Obama administration?  If not, how did Strzok write his notes if he wasn’t in the meeting?

The only aspect of this investigation that was public was the “Russia” aspect, but the Hillary part was so classified that Schiff nor Nunes could talk about it.  Instead, the fake information created by Hillary, and because of illegal leaks, everyone thought it was Trump-Russia related.

When the investigation was taken from McCabe, by Rosenstein, and handed to Mueller, what eventually happened?

No collusion.  No obstruction.

I will likely be updating this article over the next few days with corrections and stuff I may have missed.  I feel bullish on this theory, but like anything else, if more information is discovered that's contradictory, I'm happy to scrap it.

This story is fast moving, as I'm thinking of revelations as I'm typing this, so I'll likely do a follow-up article soon, because the information being released is increasingly significant, and it's like a fire hose.

There's a lot of meat on this story, and in the following video, Sgt. Friday does two hour deep-dive into these revelations.

UPDATE: Adding this tweet from one of my favorite follows, Fool Nelson: 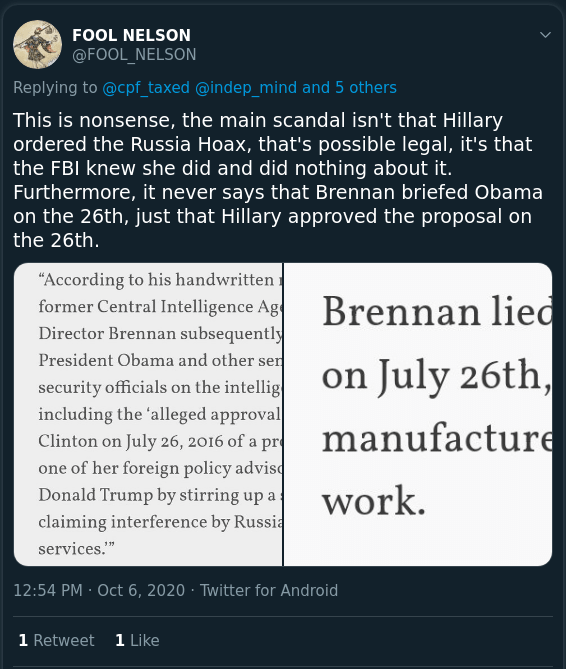 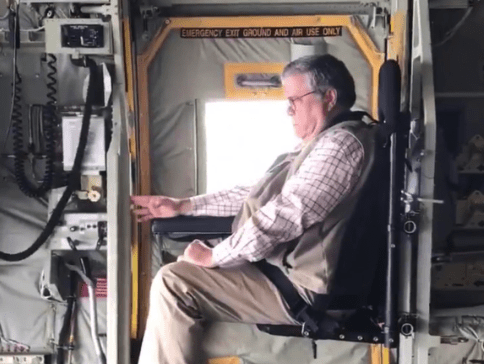 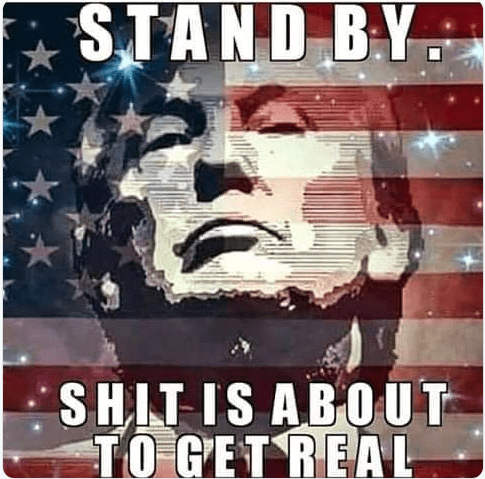