One of the great joys I've had over the past few decades is to witness a leftist think for the first time.  I get a warm and fuzzy feeling like when I watch videos of deaf babies, after a procedure to fix their hearing, listening to their mother's voice for the first time.  Likewise, it’s adorable to witness a leftist’s brain tickled with the experience of something new, like thinking and realization, so I can't help to seek them out for discussion.

There's something very important to understand that takes years to grasp: leftists are not capable of debate.  They simply don't have the intellect or critical thinking faculties.  It matters not if they were born this way, or if they were intellectually suppressed during school.  The reality is, with very few exceptions, attempts to engage with them in debate and discussion is futile.  What's the fun in that?

Instead of debate, it becomes more like a video game where strategy is involved but the goal is not to win a debate; the goal is to penetrate their defenses and leave a little time-released thought bomb that will explode later.  I have a real-world example of this in a video coming up below.

Envision engagement with a leftist like the end of "Star Wars".  Luke's X-Wing fighter had to navigate that trench on the Death Star while avoiding the defensive attacks to get his fighter in position to drop the detonators down the shaft and get out.  This is somewhat like debating a leftist; it's a mission.

When you find yourself engaged in dialog with a libtard, understand their entire plan at that moment is to bail out and run away.  They want to throw up a smokescreen of obfuscation, talk over you at a high volume, rapid-fire some false narratives (or links if you're online), and run.  If you attempt to counter with any logic or facts, you'll have better luck getting through to a brick wall.  This is where the challenge comes in.

Approach the leftist in a hands-down, non-defensive manner.  If you come in hot, they're in the wind and you'll never get to plant that thought-bomb.  They're ready for a shouting match and to raise your blood pressure.  Stay calm and treat them like a rescue cat you brought home for the first time.  It runs and hides under the chair, hiss, bite, and scratch, all while you talk sweet to it and try to cajole it with food to gain its trust.

To show a real world example, here's Steven Crowder.  He's very good at this technique since he makes a living debating and talking to leftists (yes, they're college leftists, but leftists are intellectually equal at all ages).  He instinctively knows they want to fling poo and run away.  Notice how their default approach is to avoid discussion completely, even as they hold signs and hurl racist insults:

Crowder approaches them in a very polite, non-threatening, and respectful manner.  This keeps them from running away and completely shutting down.  If he came in hot, it would ramp up into a screaming match, which is their objective.  Instead, he gets his foot into the door and is able to stay there.

Notice at the beginning the last thing they wanted to do was engage in any sort of dialog.  Take note of their body language.  To them, Crowder is a racist NAZI who should not be there and it shows in their demeanor; that's what they've been told to believe.  This is an obstacle that needs to be overcome so you can plant that little red pill.

Around the 4:45 mark, he begins to talk to the young lady who was telling him that she felt threatened.  That's their bail-out, where they can escape any situation and magically parachute into a safe space.  They are trained to say "I don't feel comfortable right now", or "I'm not feeling safe".  Exercise caution because they're one step away from calling 911 and reporting a hate-rape.

Never let them take hold of the narrative or control the discussion, and never give up any ground.  Here's a sample exchange:

In this exchange, the leftist took control.  He put out an accusation that had no merit or validity and baited you in holding it and dealing with it.  It's like the trick you've played on someone where you hand them an empty bag of potato chips and say "can you hold this?" while you walk away.  They are now holding the bag and must deal with throwing it away.

You accepted the trash, and now it's yours.  You now have dirty hands.  Instead, take an approach like this:

In this example, you didn't validate their narrative.  They're left holding their own trash and you have clean hands.  This will likely irritate them and prompt a retort, which is exactly what you want.

Always try to answer a question with the fewest words as possible.  They want to do the question-asking.  Use this to your advantage. When a leftists asks you a question, hand them a short answer they have to deal with.

Another reason to give short answers is if you give a long answer, they're not listening anyway.  What you say has no relevance to what they want to say, and it will not stick in their brains; they're not having a dialog with you.  Short answers allow you to put a stake in the ground for your position, and forces them to ask another question, attempting to emotionally rattle you.

Here's a video of a young indie reporter who has mastered this technique:

As you can see, she dismantled this leftist with few words.  Notice how the leftist also desperately tried to find others to form a pack.  They're not equipped to go one-on-one and need the safety of groups.  It's fun to take on more than one at a time, but stay focused on one person because they will talk over each other.

Here's a technique they've been trained to use regarding abortion:

Abortion is a hot button issue that's in their emotional wheelhouse.  In this example, the leftist took control and was able to push you around with emotion.  You mean this lady is going to have to raise her baby, look it in the eye every day and be reminded of her rapist? Are you some monster?  The leftist shifted the dialog to you being against women and pro-rape.

Instead, here's a better exchange:

These are generalizations, but if you stick to the point, in this case abortion is murder, then you force the leftist to expend their energy and emotion trying to bait you.  Remember, the leftist is in no way trying to convince you of their position. They are looking to knock you off your game and be able to brand you racist and against women.

As the leftist continues to lob questions, you're able to give back doses of those information bombs.  Miss Bennett did this in the video when she concisely answered how the baby can feel pain and have a heartbeat.  I am certain that nagged the leftist later on in the day and possibly reconsidered her position.

Try and force them to commit to an answer, which is very difficult.  Here's an example I've tested over and over:

From there you established they have an anti-American bent that you can play around with.  Contrast that if it's the other way around:

NPC: "Is America the best country in the world?"
You: "Yes."

You: "Yes. We have the most opportunity because of our capitalist system, and we have the best health care in the world."

Such a response will always set off a DEFCON 1-level triggering that's guaranteed to initiate a meltdown.  You'll learn any response that puts America, capitalism, or our superior health care system in the best light exposes a well of emotional outrage you will always be able to tap.

If you're in a situation where you need to present facts, always make sure it's from a government source, or a liberal source; the further left the better.  If you use Breitbart, Fox News, or any such outlet they will automatically shut down and bail, and 99.999999% of the time anyway their first response will be “where did you read that? Breitbart?”.  Mitigate the opportunities they have to bail out.

There’s other techniques you can use, such as throwing them off their game from the start.  If some libtard starts jawing at you about Trump or whatever talking points he learned to parrot that day, ask him “who represents you in Congress?”.  99% of the time they have no idea because they aren’t politically astute, yet have opinions on politics.  Once they concede they don’t know, just laugh and walk away, and I promise it will drive them crazy for weeks.  Of course, that one only works in person, because online they can look it up, but you get the idea.

For any subject, common sense trumps any facts you would need to counter their idiocy.  For example, with global warming, academics manipulate the data and their predictions have always been wrong; why believe people who manipulate data and are always wrong?  This is a thought bomb that will hit them weeks or months later.

Take a few of these tips and have some fun. Remember, libtards exist for our amusement, so enjoy them. They are academically trained to raise your blood pressure and get you off track, so practice keeping cool and forcing them to commit to a point, and practice dropping that fact or concept that they'll be nagging at them for weeks to come. 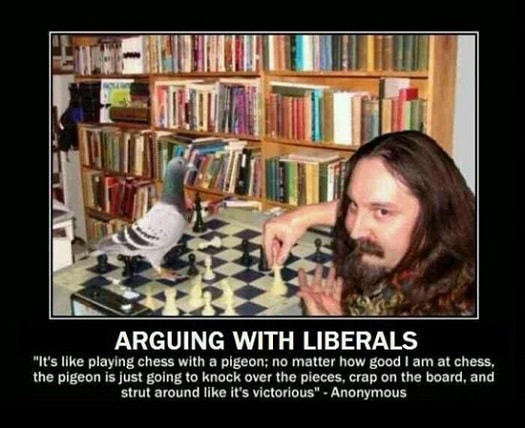 AntiFa is hilariously failing in the suburbs