I’ve never bought into the myth that a large slice of the electorate wants socialism.  Over the decades, Marxist propaganda systems like academia and media have done an incredible job frog-boiling the country to take the edge off the post-cold war perspective of socialism and its derivatives, while pouring sugar on it to make it more palatable for each incoming generation of voters.  However, the real polling story shows people reject it outright.

Over the years, and especially during Bernie Sanders’ run of idiocy, you’ve seen polling that shows a favorable view of socialism.  I’ve never believed this because one truth I’ve learned over the years is that Marxists fear nothing more than being subjugated to their own Marxism.  It’s great when you’re the dictator or at the top of the government, but it’s terrible for everyone else.  Therefore, I've always discarded such polls because I knew those people didn’t know what socialism means.

It’s important to understand that poll results are only as relevant as the questioning.  This short clip from the show “Yes, Minister” in the United Kingdom brilliantly displays how poll results are manipulated:

The Daily Signal had an interview with Scott Rasmussen, and they delved into the subject of polling socialism:

Davis: Yeah. A big issue in polling today is socialism with the growing trend, popularity of it with Bernie Sanders and [Rep. Alexandria Ocasio-Cortez] and all of those fun folks.

What do you make of the polling trends when it comes to the way Americans feel about socialism?

Rasmussen: This has been one of my real pleasant surprises coming back. I stayed out of polling for several years, came back in and get to look at data fresh again. And like everybody else, I was shocked by the number of people that support socialism.

Our latest poll found 39% of voters favor socialism. And I grew up in the Cold War era. We knew that was the evil ideology that destroyed the Soviet Union. And Ronald Reagan was convinced that we would outlast them because their system was internally inconsistent, and he was right.

When I began to look a little deeper, I quickly realized that when people today say they like socialism, they are not at all talking about what Bernie Sanders or AOC are promoting. Total disconnect from that.

People who support socialism don’t know what it is or what it would mean for them.

Rasmussen: In fact, most people who say they like socialism don’t think of it as an economic ideology. And for people who might think of The Heritage Foundation as the ideas they want to associate with, there are some things about socialism today that will shock them.

A majority of people who say they like socialism today think the country would be better off with less government involvement in the economy.

Only 1 out of 3 people who say they like socialism think it leads to higher taxes and a more powerful government.

If you know anything about socialism, you know it doesn't involve less government.

Davis: Wow. I was actually just looking at this Gallup poll recently showing that a large segment of the population, double-digit majorities of Americans want the free market to govern certain sectors of the economy over the government, even if they say they like socialism.

So there’s common ground instead of saying, “You’re wrong,” we should say, “Well, yeah, let’s talk about where the market can get involved.”

This is an interesting point because it shows the human nature and common sense of people to understand that free markets are what makes our country great, while still holding onto their indoctrination.  They naturally understand reality, while parroting the fake.  It's a good point that conservatives, me included, need to adjust their approach when having serious conversations with less educated people, such as college professors and Sanders supporters.  We need to highlight their human desire to be free, agree on that premise, and work from there.

Going tit-for-tat, or capitalism versus socialism like we're arguing the Celtics versus Lakers doesn't seem to be the right approach.  If you're arguing with someone who is pro-socialism and anti-capitalist, it may be that they're pro-capitalist and anti-socialist but need help understanding that's really their position.  The easiest way to kill socialism is to help people think by flipping on that light bulb in their brains.

Rasmussen: Second thing is, there is a difference between supporting the idea of socialism and supporting socialist policies.

However, if you say, what about, and this is in Bernie Sanders’ plan, getting rid of private insurance companies? Only 18% of voters support that.

And … if you can provide more choices, you’ve won those people over. And that’s the difference. So people aren’t looking for socialist policies to limit their choices.

Sanders’ entire philosophy is a loser in this country and is fundamentally anti-American once people understand it.  I’d bet that 18% is much lower.

For those of you conservatives who panic when you see kids on some college campus chanting propaganda while wearing pink hats, relax.  They’re an overwhelmingly small minority, and those people don’t vote anyway.  Understand also that people grow out of leftist brainwashing; not the other way around.  They grow up, have families, and have to produce in some way for their livelihood; this is bad for the socialist movement.

Socialism has a built in self-destruct button, and Rasmussen’s insight supports the real story that the majority of Americans reject socialism, whether they know it or not. 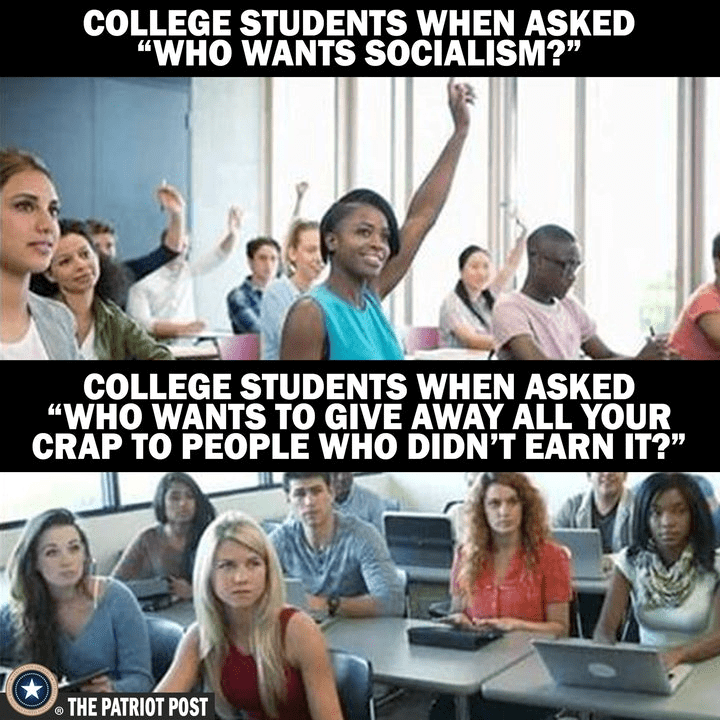