It's not just Baltimore

Democrats frequently use the charge of racism to detract from the reality of their failed policies and governing strategies. Calling someone a racist for pointing out the inept governing strategy of a flawed city not only tips the scale of political dishonesty, but serves as a way for Dems to shut down debate. Furthermore, it detracts from the real arguments at hand. But what good does such a tactic do for the overall discourse of our country?

A recent example of this tactic is Democrats reaction to Donald Trump's comments regarding the city of Baltimore. In review, Donald Trump responded to attacks of racism levied by Congressmen Elijah Cummings by exposing the city of Baltimore and Cummings himself. Trump's response centered around Cummings complete failure to help the citizens of his district, while at the same time calling it a "-disgusting, rat and rodent-infested mess." among other things.

Why is so much money sent to the Elijah Cummings district when it is considered the worst run and most dangerous anywhere in the United States. No human being would want to live there. Where is all this money going? How much is stolen? Investigate this corrupt mess immediately!

Additionally, Trump countered Cummings himself, calling the senior congressional member a "-brutal bully." for his abuse of border patrol agents and false criticisms of Trump himself. Cummings had initially facilitated the exchange between himself and the Trump Administration through his position on the house oversight committee. Cummings has held his district for roughly ten years, with very little to show for his time in public office.

Moreover, the Democrats have used Trump's attacks against the city to try and prop it up, with some going so far as calling it a lively and safe place to live. But the reality lies in the numbers. According to Neighborhood Scout, an online analytics database, Baltimore Maryland ranked sixth on their list of the most dangerous cities to live in the United States. Two thousand nineteen statistics show crime rates through the roof. Baltimore has a crime rate almost equivalent to Detroit (run by democrats), with a 1 in 48 chance of someone experiencing violent crime in the city. These numbers even surpass the city of Chicago (also democrat), whose rate sits at just eleven percent.

The city's taxes are some of the highest allowed in the United States. Baltimore's public school systems are completely inept and underfunded. A 2017 report by Zero Hedge media showed proficiency rates in English to be only five percent. Proficiency in math was even lower, at zero percent. The city also has a severe vacancy problem, with large pockets of uninhabited and abandoned buildings occupied by squatters and addicts. According to Healthcare for the Homeless, about 1 in 4 Baltimore residents live below the federal poverty line.

These facts are not a shock for a city that has been under democratic control for the last fifty-two years. Among notable events, the city was at the center of the Freddy Grey protests. Everyone remembers how a young black male died in police custody, resulting in days of riots and protests against the racist police force and city leaders. Black Lives Matter and other groups convened on the city, calling for resignations and further investigations into the incident. Bear in mind, their protests were at a time when the city held a majority-black leadership in both government and police. Not to mention the country was run under Barak Obama, who famously led the charge against our nations law enforcement community, calling them "Stupid" among other comments.

Cummings and those who have attacked President Trump regarding his comments are the same people who look at a city like San Francisco with gleaming eyes. Baltimore, like San Francisco, had a poverty rate of 21.9 percent in 2016, nearly double that of the entire state of Maryland. Drug addiction and crime continue to litter the inner city. This epidemic has pushed anyone worth their salt to pack up and leave for the surrounding counties, where it is far safer than within the city limits. At least there, your child may have a shot at being adequately educated.

These statistics don't just reflect the poor governance of democrats in Baltimore, but instead shed a brighter light on the overall management of democrats in other cities. San Francisco, which was once the bastion of innovation and wealth, now has a homeless population of over 8,000 people according to Curbed.Com. Policies handed down by democrats have led to minimal action by police, resulting in massive tent cities, and a crime rate that has topped nearly 70 for every 1000 residents. Neighborhood scout has ranked San Francisco at a crime index of 2 on a scale where 100 serves as the safest number. Only two percent of the cities in America are more dangerous than San Francisco. Like Baltimore, this is a city that has been run by the democrats for over fifty years, further showing a disturbing trend in governance.

But the damage doesn't just extend to the politicians. It's own citizens, many of whom are involved with or encourage the actions of radical left-wing groups, stand idly by as their cities are destroyed. Following the Freddy Grey protests, the city of Baltimore reported damages of over nine million dollars. In total; 30 businesses and 144 vehicles were totaled. Thirty of those buildings could not be recovered due to fire damages and had to be removed. In 2017, rioters at Berkley College in Los Angeles caused over 100,000 dollars in damages at a Milo Yiannopoulos speech, according to Patch. Thousands of dollars in damages, trash strewn everywhere, with little to no effort being made to help these cities.

There are some, however, who would can not stand by and watch as these liberally run cities slowly die. This August, Scott Presler, and a group of Trump Supporters took to Baltimore's West side in an effort to clean up the filthy city. Together, Presler and a group of 100 volunteers collected over twelve tons in garbage off the city streets. You would think this action might be celebrated, but no. Instead of showing their appreciation, the left attempted to brand these actions as racist, implying that by having a group of strong minded Trump supporters come in to do the work they could not, that "-poor people in this city can’t take care of their own neighborhoods." as echoed by left wing media outlets following these reports. But that's exactly what it shows. That's what all of this shows. At what point will the Democrats admit their failure and throw this charade where it belongs, in an actual garbage can? 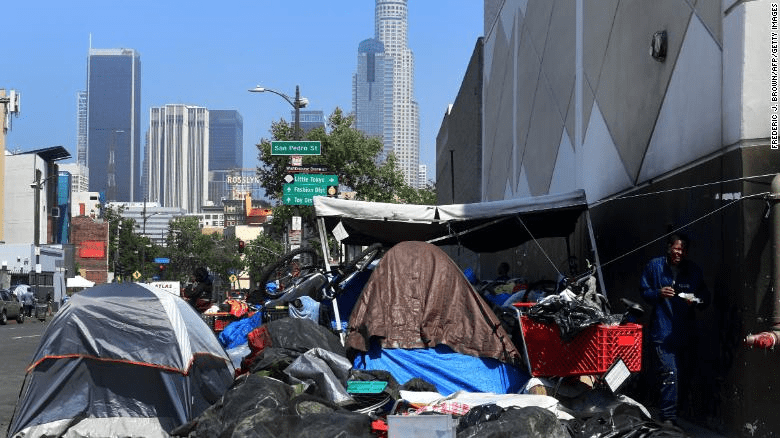